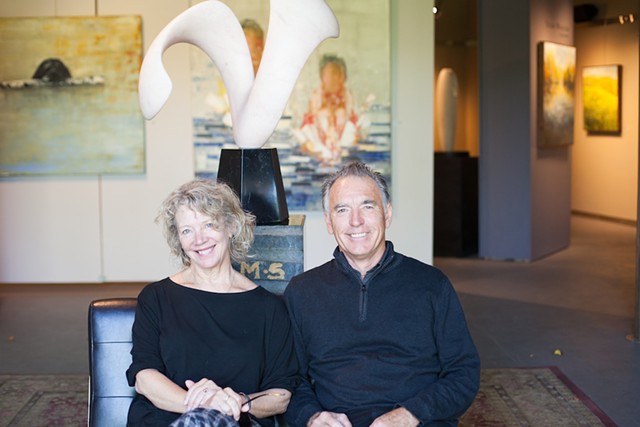 While rumors of the sale have been circulating for some time, Curtis and Swenson were able to confirm the . The buyers are investors affiliated with Stowe Cider: Christine and Bill Windler, parents of cidery and chief cider maker Stefan Windler; Betsy Haines and her partner Marc Chretien, the latter a former adviser to the commander general of the U.S. Army.

Curtis said that clients, visitors, artists and employees won't notice much change with the transfer of ownership. "We're not planning any big shifts," he noted.

"Stowe Cider approached us hoping to buy our building, which we weren't really anxious to sell," Curtis explained. "Initially we made a deal with them to lease the gallery space from them after they owned the building. But, as we got to know them better, we said, 'You should look at the gallery, too.' They have the business skills and seemed like they would enjoy it."

Curtis said he's excited to spend more time focusing on his own art making in stone and metal. He and Swenson will retain ownership of the outdoor sculpture park and continue to represent the artists who exhibit there. Swenson will stay on as curator, but with fewer administrative demands. Gallery manager Patricia Trafton will stay on, as well.

Seven Days interviewed Chretien by phone in his Virginia home. He also owns and operates Mount Defiance Cidery & Distillery in Middleburg, Va. For seven years, Chretien worked in Iraq and Afghanistan "as the political adviser to the commanding general of all Afghan forces," he said. "I retired three years ago with a great desire to do something without getting at. Like having a cidery."

Now, he can also engage in a curatorial practice. While Chretien says Swenson and Trafton will still take the lead, he's looking forward to helping out with exhibits. "We're going to take our cues from the pros on this," Chretien said, "and any change we'd ever make would be at a glacial speed."

Extra space in the building that houses West Branch will be used by the cidery for production purposes. Chretien expects he will spend more time in Vermont as a result of the transition.

"We're making the leap from a small cidery to a medium-sized cidery that serves more than our home in Vermont, into New England the Eastern Seaboard," he said.

Correction, June 7, 2017: An earlier version of this article misstated Patricia Trafton's job title. She is the gallery manager of West Branch.