Everybody Poops: A Q&A With Comedian Adam Mamawala | Live Culture

Everybody Poops: A Q&A With Comedian Adam Mamawala 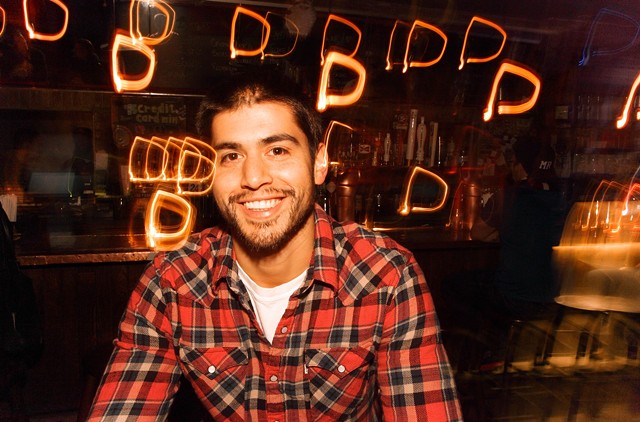 Adam Mamawala has a way of tackling weighty subject matter with equal measures of insight and charm. The New York City-based standup's laid-back affability allows him to soften his punches on touchy topics from race to relationships — and, occasionally, bodily functions — without ever softening his punchlines.

Relatable and hilarious, Mamawala is a rising star in NYC's standup scene. He was named one of Funny or Die's "Top 30 Under 30: Comedians to Watch" and finished as a semifinalist or finalist in prestigious comedy contests such as Carolines New York's Funniest Competition and the Laughing Devil Comedy Festival. He's also appeared on MTV's "Girl Code" and is one of the most in-demand comics on the college comedy circuit, having headlined more than 200 colleges in 35 states.

On Thursday, June 8, Mamawala records his kinda-sorta first comedy album at the Vermont Comedy Club in Burlington. Burlington's the Tank Recording Studio engineers the project. Seven Days recently spoke with the comic by phone to talk about how his friends and family feel about appearing in his material, his scariest moment on stage and, of course, poop shame.

SEVEN DAYS: Is this your first comedy album?

ADAM MAMAWALA: It is and it's not. I think this is the first one that I will be proud of and will be released on a wide scale, hopefully. Chalk it up to hubris or naiveté, but I recorded an album when I was 22. And, frankly, it's so bad that I want it removed from the face of the Earth. And I did a DVD very early on in my career.

So, I want to think of this as my first album, even though that's not entirely accurate. But one of the things I want to do is run some sort of promotion that, for anyone who owns either the first CD or DVD, I want to make sure they have what I come out with now. So, if they tweet me a picture of them with the CD or DVD, I'll send them a copy of the new album for half-price or whatever as kind of a way to say, "Hey, sorry I released some things before I should have!"


SD: What made you decide to record at the Vermont Comedy Club?

AM: I've known Nathan [Hartswick] and Natalie [Miller], the people who run [VCC] for a long time. I'm friends with them. And my experiences performing there have been amazing. I headlined there for a weekend shortly after they opened and I featured for Gary Gulman there this year, which was incredible.

Something about the atmosphere in that room really drew me to it. I think since the comedy scene in Burlington is still young, people are really excited about seeing comedy there. Being in New York, where there is almost an over-saturation of comedy, people get jaded by it to some degree. So, to be in an environment where people seem genuinely excited about having that happening in their city, to me it was the first place I thought of.


SD: Do you notice a tangible difference between Burlington comedy crowds and audiences in other places?

AM: One of  the things I like about Burlington crowds is that they tend to be smart. That's not to say that some places are not. But sometimes [in other places], you have more of a vibe where it's people who are just looking to have a night out where they don't have to think about anything. But in Burlington, by and large, the audiences are intelligent, so you can go for more cerebral stuff and they're still with you.

But really, it's the excitement. People there are good-natured. I've probably done 10 shows in Burlington and always had a good experience. Even if people are a little drunk, I've never dealt with anything malicious, which at a lot of other clubs you have to deal with.


SD: We're pretty mild-mannered here. I was at one of the Gulman shows. And after your set, one of the women in our group confirmed your joke about women and "poop shame." She said, and I quote, "Poop shame is real."


SD: I feel like poop shame crosses gender barriers, though. It's a broader societal issue that at some point affects everyone who poops — which is to say everyone. So, how do we demystify and de-stigmatize poop shame?

AM:  Goodness. Well, I think I'm trying to start a  dialogue about it. That's the first step: to acknowledge that all human beings poop.

It's funny to me that there is still this element of guys, even into adulthood, that are like, "Girls don't really …" and won't even acknowledge that a bodily function happens for everybody. Like, I have friends who are engaged and they still don't fart in front of their significant others. And it's like, "Are you just gonna hold it your whole life?"

For myself and my wife, from early on we were pretty open about it. I mean, we're not, like, hanging out with each other with the door open. But we acknowledge that it exists. So, the main thing is just for people to be honest about what's going on.


SD: I think you've found your cause to champion.


SD: Your wife, Ali, features prominently in your act and you share some pretty intimate details of your lives — like the poop-shame joke, for instance. Does that ever get uncomfortable for her or cause problems in your relationship?

AW: Not particularly. Any time that I talk about somebody who's close to me in my act, I make sure to run it by them. If there's anything that I think might be hurtful or embarrassing, I want to be sure they're cool with it, because it's not worth it to me to have a joke that's going to be detrimental to my relationships. But she understands what the deal is and that a big part of my job is being open about what's going on in my life.


SD: The interviews you two did [for the web series {THE AND}] are so candid and, I thought, touching. How did that come together?

AM: That YouTube channel, their whole thing is promoting open and honest conversations between people. They asked Ali and I to come in. We're very open with each other anyway. But it was a really cool experience. They sit you down, give you a bunch of flash cards and then you run the interview. It's just the two of you sitting together and trying to be as open as you can.

I was happy that they seemed to get a lot of positive feedback. But it was tougher for Ali, because I'm used to getting feedback on things all the time and having people say negative things, because my standup is online. But she's not. So the few negative comments affected her personally. But overall it was a cool experience.


SD: Has Aziz Ansari seen your impression of him?

AM: I don't think he has. Or if he has, he has not mentioned it to me. But I've definitely gotten a lot of good feedback from that.


SD: It's a pretty dead-on impression.

AM: I didn't realize it was as good as it is. When I came out and did that show [see the video below], literally from the first word that I said, people were like, "Oh, shit. This is really him."


SD: You talk in your act about being "ethnically in-between looking." Is that a double-edged sword for casting calls?

AM: It's very much a double-edged sword. The ethnically ambiguous thing is great for commercials, because, if they're casting a Bud Light commercial, they want someone who looks like they could be a number of different things so that you're relatable to a wide range of people.

But if they're casting a specific role that's a specific race for a TV show, I'm kind of in this weird middle ground where I don't fit into any category. I went out for an audition last year for a character named Raj. And, yes, I'm half-Indian, but I don't look Indian enough that I can pull off playing someone who is supposed to be an Indian guy. Nor can I pull off playing a white guy. So it becomes challenging in that way.

But it helps in that there is more of an emphasis now on diversity casting than ever before. So that opens up opportunities for me. If you're a straight, white male, there's just a lot of you. And that can be an uphill battle. But I'm in an interesting position where I look fairly Caucasian, but it's not clear exactly what I am.


SD: Last question: Was getting heckled by the Kimbo Slice look-alike the scariest moment of your career?

AM: It's got to be up there. I was in Oregon, where I knew nobody, so if something had happened, I don't know that anybody was going to help me. And it was unclear to me whether or not that guy was serious.
I think, for most comics, our defense mechanism is just to try to make a joke out of it. So, I tried to handle it as diplomatically as possible. But ultimately, if that fellow wanted to come onstage, I don't think there was a lot anyone would have done to help. And I'm sure you've seen videos of people getting onstage and starting fights with comedians. I don't want to put myself in that position. Because it's not like I'm a shock comic or someone who incites a lot of anger or hurts a lot of feelings. So, that situation was somewhat of a rarity for me.


SD: You certainly handled it well.

AM: It ended up being really funny. But in the moment … it was kind of exhilarating, but only because it didn't come to the point that it could have.

[Update: Adam Mamawala's 9:30 p.m. show at the Vermont Comedy Club on Thursday, June 8, has been cancelled. In lieu of that performance, he'll be sitting in with the VCC's house long-form improv team, the Unmentionables, as part of their weekly show, "The Daily Grind," at 9 p.m. Mamawala will  still perform at 7:30 p.m. ]