In 1986, sculptor John Brickels was juried into Frog Hollow Vermont State Craft Center. His wife, artist and Essex High School art teacher Wendy James, began to show her work at the gallery in 2011. Now, after decades of working within and supporting the Vermont arts community, the couple have announced they will be moving to Massachusetts in June, following James' retirement from her teaching career.

To bid the pair bon voyage and honor their contributions to the state,  Frog Hollow will mount the exhibition "Here to There," opening Thursday, June 1, with a reception from 5 to 8 p.m. The show will include an array of works spanning the artists' careers, including Brickels' celebrated architectural clay sculpture and later steampunk-themed pieces, and a selection of James' paintings and photomontages.

Married in 1997, Brickels, 64, and James, 63, will trade in their shared Howard Street studio in Burlington's South End for a live-work artists' space in a converted mill in Lowell, Mass. — just 14 miles from their two young grandchildren. Brickels told Seven Days in a phone interview that they had been interested in purchasing a home in Burlington, but were unable to find the right place for the right price.

They'll be in good company in Lowell, though: Brickels says their new space houses 250 working artists. "It's perfect," he said. "If we were millionaires, this is what we would want to do."

Brickels and James have witnessed many changes to both Frog Hollow and the Burlington area during their tenure here. Like many artists with ties to the South End, Brickels has taken note of the area's ongoing development. "The pressure for finding inexpensive artists’ spaces has been interesting to see," he said. "Most artists are not making a lot of money." 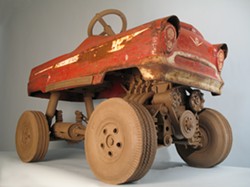 Brickels noted that Frog Hollow, founded in 1971, used to be more of "a kumbaya nonprofit" than it is today. "Now they’re a lot leaner — there’s only one gallery instead of three. They’re a lot more efficient." He served as one of the organization's board members from 2008 to 2011.

"Frog Hollow was such a good vehicle for getting known and helping me to be successful," Brickels said. "They always put my stuff in the front window." He added, "I’m not saying I might have hung around the front window just to listen to people talk about the work, but I might have done that."

Brickels expressed that both he and James will certainly miss the friends they've made here, as well as the "comfort" of Vermont. "But," he said, "it's not like anybody died — we're just three hours away."

He continued optimistically, "There will be a new set of imagery for painting, photography and sculpture." As the artists often put it in their exhibition statement, "Everything changes."