Last Saturday at Battery Park, a group of Burlington's Nepali residents celebrated Sansari Puja, or Mother Nature worship. The annual event organized by the Kirat Rai and Limbu communities is intended to thank the gods of nature and to ask them for future prosperity, explained Kathleen Haughey of the Vermont Folklife Center, which sponsored the celebration.

In Nepal or Bhutan, devotees typically gather in the jungles or near rivers. Sansari Puja is also usually held during the Nepali month of Baishak, or April in the Gregorian calendar. "It's a special day," said Chatur Rai of Burlington 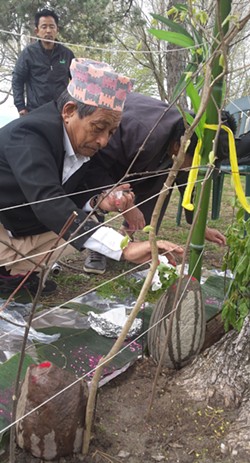 Hours earlier, the attendees had erected structures made with bamboo, wire and strips of cloth. The rocks installed beneath them represented gods of nature taking shade under the trees. Devotees placed fruits, flowers, incense and dollar bills on banana leaves as offerings. A sewasaba, or priest, read from the Kirat's holy book.

"It's very interesting," commented Abdillahi Hassan. He lingered to chat with members of the non-Nepali community who had been invited to join the festivities.

One of them was Mark Sustic, executive director of Young Tradition Vermont. "I'm just here to be helpful [and] celebrate an important time of the year for the Nepali community," he said. It wasn't the first time Sustic joined the group's activities. Together with VFC, his organization is trying to support Nepali immigrants in preserving their music and dance.

Other members of the larger Nepali community pitched in to help with the festivities. Among them were Sita Poudel and sisters Krishna and Durga Adhikari. They made tea, peeled potatoes, and chopped onions and tomatoes to cook curry and aloo gobi (a dish made from cauliflower, potatoes and spices).

Slideshow Sansari Puja and Buddha Jayanti Festivities in May 2017 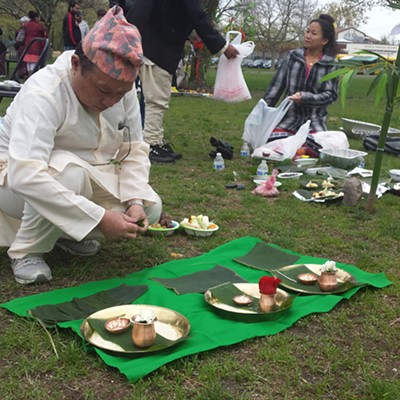 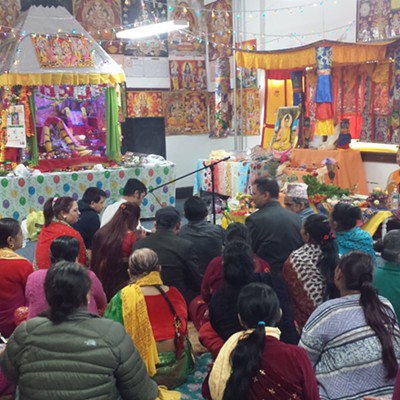 Sansari Puja and Buddha Jayanti Festivities in May 2017
By Kymelya Sari
Click to View 13 slides
About a five-minute walk from Battery Park, another festival was simultaneously taking place at the former St. Joseph School on Allen Street. That space is usually used by pandits, or priests, from Vermont Hindu Temple to lead Hindu prayers.

But on that day, Lama Guru Samten read Buddhist scriptures as part of celebrations to mark Buddha's birthday, also known as Buddha Jayanti. The lama sat beside a makeshift altar with statues of Buddha, surrounded by tapestries of Hindu gods and Buddha. When the lama took short breaks, the attendees, most of whom are members of the Vermont Hindu Temple, sang bhajan, or devotional songs, praising  Buddha.

Hindu-Buddhist joint celebrations were common when they lived in refugee camps in Nepal, Gurung explained. Now that Bhutanese Nepali families have settled in Vermont, that tradition continues.