Joke of the Week: My Hero | Live Culture

Joke of the Week: My Hero

May 15, 2017
It's Monday, which means it's time for your weekly dose of locavore levity: the Joke of the Week! This week's joke comes from Burlington's Tim Bridge. Take it away, Tim…


I read an article that said Vermont has a heroin problem and I think it's just so typical that people think it's a "problem" that women are saving people.

Says Bridge: It's a heroin/heroine pun … I have nothing more to say about it. 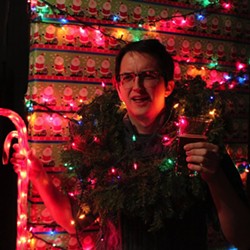 Tim Bridge is a writer, standup comedian and improvisor who has performed comedy for no pay whatsoever across the country — from New England all the way to New York a couple times. He is a member of Vermont Comedy Club's house long-form improv team the Unmentionables, and is the cohost of the "What the Hell Are You Watching" podcast, with Lincoln Hayes.

In 2015, Tim placed fifth in the Vermont's Funniest Comedian standup competition and was also a finalist in 2016. He is a member of Burlington-based sketch troupe Feed the Meter. Tim is very tired all the time.

Bridge performs with the other finalists of the 2016 Vermont's Funniest Comedian contest at the Best in Show showcase this Saturday, May 20, at the Vermont Comedy Club in Burlington.