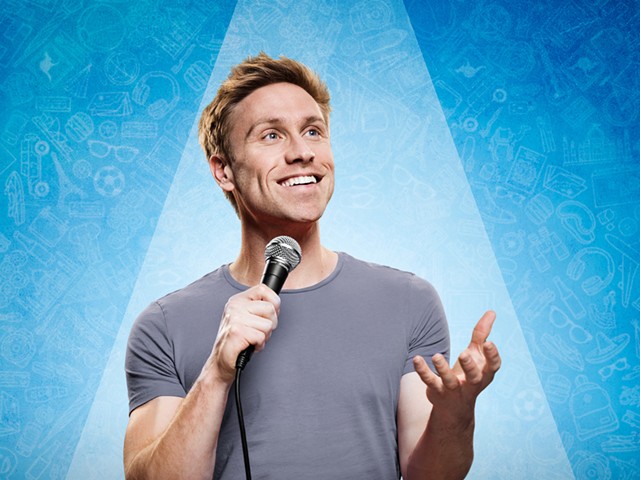 OK, he's maybe not that big. But, earlier this year, the British comedian and television host did headline 10 straight nights at London's famed Royal Albert Hall, breaking the record previously held jointly by Manilow and some guy named Frank Sinatra. That ain't bad.

Howard is inarguably one of Britain's most successful comedians. He is currently in the midst of his Round the World Tour, during which he'll play comedy clubs across the globe, including the U.S. It's not quite the Royal Albert, but Howard stops by the Vermont Comedy Club in Burlington for two shows on Wednesday, May 10.

[UPDATE: Howard has canceled his VCC appearances due to unforeseen circumstances.]

Seven Days recently spoke to Howard by phone and asked him about his 2016 travel doc series for Comedy Central, "Russell Howard & Mum: USA Road Trip." The six-episode series follows Howard and his mother, Ninette, as they traveled the country searching for the American Experience — which apparently includes meeting doomsday preppers, hunting ghosts and UFOs, learning to rap and entering a demolition derby.

SEVEN DAYS: So, just how often were you and your mom confused for a couple?
RUSSELL HOWARD: A lot on the East Coast. I was horrified by it, because I thought it made me look old. Mum was delighted by it and took a weird pleasure from it. She was very pleased. But it's kind of gone on the world over.

When we were in LA, they thought we were a couple and my mum played up to it the entire week. She kept calling me "husband" and muttering about the kind of sex we'd had the night before. She told one of the waiters that I was a male prostitute she'd got cheap because my eyes were lazy. So, she really enjoyed it, whereas I was less keen.

SD: It's like a twisted Harold and Maude kind of thing.
RH: We had an argument about in New York. She got offended and was like, 'So do you not think I'm attractive?" And I said, "Well, no, I don't. Because you're mum." Then I said the line to her, "I like you as my friend, not as my lover." And I stand by that.

SD: You have a really open relationship with your mom when it comes to talking about sex.
RH: It varies from family to family. Lots of my friends don't have the kind of open relationship that I have with my family. I've got a huge family, like, 40 cousins. There's drunk uncles whizzing about. It's just what I'm used to you. And it's a side of England that probably isn't seen as much in the U.S. because it's as far away from a Richard Curtis film as you can get. I'm from Bristol and we just don't take ourselves very seriously.

Having said that, I know loads of comics in both England and America who have strong mums, really funny mums. I'm just one of those, really.

SD: What was your favorite place to visit on the show?
RH: I loved Portland [Ore.]. It was relaxed, and it's nice to be in a city where you can walk around. But I just find America such a fascinating place.

Certainly in England, we're very quick to judge people who never leave America. But when you spend time here, you're not surprised people don't, because there are so many different Americas. Plus, you don't get as much time off here and it costs a lot to go to Paris. But the difference from Atlanta to Portland to New York to Nashville, it's so fascinating.

And it's fun to see what's funny [in different places]. What really works in England kinda doesn't work in Nashville. It's a bit like doing a gig on quicksand.
SD: That sounds terrifying.
RH: I'm trying to have more of a global approach to standup. I did all of these gigs in England in an arena with 15,000 seats. But then it's cool to go and do a show in Atlanta in front of 200. And hopefully traveling across America I'll have a better understanding of how Americans feel about Trump, how different areas feel about Trump.

SD: I'm not sure anything illustrates the idea of different Americas better than Donald Trump.
RH: It's similar to England at the moment. The one thing I think connects us all is the paucity of leadership. I could tell it was similar when I was in America last year, because it was rampant nationalism versus apathy. It was, "Well, I guess I should vote for Hillary" versus "USA! USA!"

It was similar with Brexit in that you could see it happening, because when it's disenchantment versus nationalism, nationalism is always going to win. I know my thoughts on Brexit inside and out and I can talk about it at clubs in England. But the challenge will be if I can talk about Trump over here just to see what the lay of the land is.

SD: In a place like Burlington, you could rip on him for hours and people would beg for more. In other places, though…
RH: Even if I have a really bad gig in the South, it would be a really funny story for when I get back to England. But, having said that, comedy clubs in places where people are Trump supporters might be the best gigs, because that's where all the angry people gather.