Joke of the Week: So You Drink You Can Dance? | Live Culture

Joke of the Week: So You Drink You Can Dance?

May 08, 2017
It's Monday, which means it's time for your weekly dose of locavore levity: the Joke of the Week! This week's joke comes from Lyndonville's Caleb Teske. Take it away, Caleb…

If you've ever seen me dance like nobody is watching, it's probably because I was drinking like I have three kidneys.

Says Teske:  I was drunk. 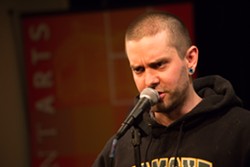 Caleb Teske is a Lyndonville-based comic.  He produces and hosts three showcase comedy shows in the Northeast Kingdom, including at the Kingdom Taproom and Catamount Arts in St. Johnsbury, and at Burke Mountain in East Burke. He also performs in various other shows across the state. Teske is a member of the sketch comedy troupe Socially Irresponsible  and hosts his own political comedy podcast, "Better Left Unsaid."

Teske performs at Comedy & Crepes on Monday, May 22, at the Skinny Pancake in Burlington.