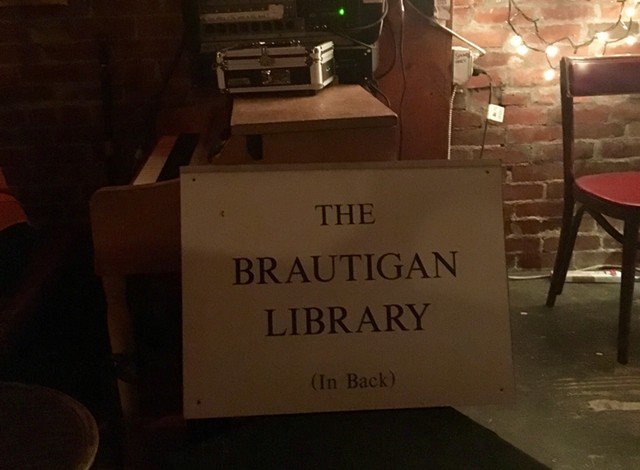 Burlington seems to have a cosmic connection to counterculture author Richard Brautigan, known for his 1967 novella Trout Fishing in America, among other titles. On Sunday night at Radio Bean in Burlington, a small group of local artists and fans got together to celebrate the spirit of the writer's work with the Richard Brautigan Group Art Show.

The event, which riffed on a fictional library in Brautigan's 1971 book The Abortion: An Historical Romance 1966, invited attendees to bring a piece of original artwork to hang on the walls of the small coffee-shop-cum-concert-space. Artists Sarah Letteney, 32, and James Bellizia, 40, organized the event/exhibit and said the works will be on display for a month.

The Abortion was also the inspiration for Burlington's quirky Brautigan Library. In 1990, photographer Todd Lockwood conceived of and launched the library on lower College Street. People would bring or send in original, unpublished manuscripts, which Lockwood bound with a hardcover binding machine and added to the bookshelves for perpetuity. Visiting hours were on weekends and volunteers staffed it in shifts. The collection, which grew to several hundred volumes, was moved to the Fletcher Free Library in 1995, and later to the Clark County Historical Museum in Vancouver, Wash. (Brautigan was born in Tacoma, Wash.)

Lockwood appeared at Sunday's shindig, and even brought one of the signs from the original Brautigan Library. Former volunteer librarian and Localvore Today cofounder Michael Nedell also paid his respects, adding a mirror-based piece to the wall. His artwork, which included the words "Know thyself," references one of Brautigan's capers in the hippie-centric Haight-Ashbury district of San Francisco. The writer would carry around a mirror, turn it on unsuspecting passersby and shout, "Know thyself!" 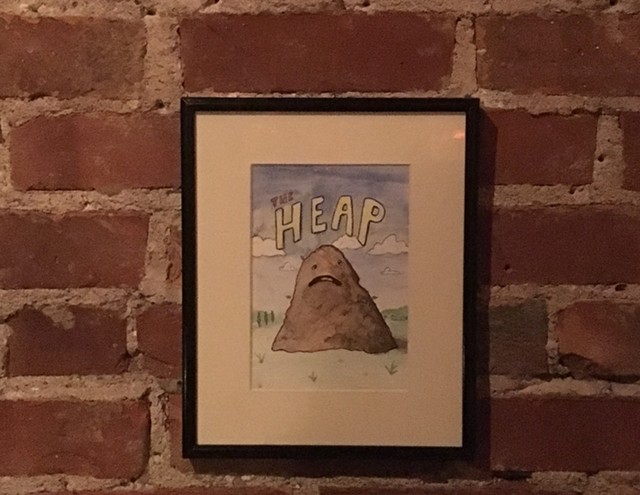 Few pieces of art were hung on the walls at Sunday's soirée, but Letteney said she hopes that people will contribute more to the exhibit throughout the month.  Bellizia brought a small ink-and-watercolor illustration of "The Heap." The jolly brown mound is a reference to a passage in Brautigan's first novel, A Confederate General from Big Sur. The idea for the exhibition came from an interaction Bellizia had recently with his young son. "He really loves animals, so we were going over the sound each animal makes," he said via email prior to the show. "When we got to the alligator, I was kind of stumped.

"Then I remembered the part in A Confederate General from Big Sur when Lee Mellon is throwing pork chops to the alligators in the pond and they say, 'Growl, opp opp.' So I drew a picture and put it on Instagram. Sarah saw it and had this great idea to do a group show." Bellizia and Letteney declined to be photographed for this post, preferring to remain semi-anonymous hosts. First and foremost, said Letteney via email, the goal was to create "a comfortable place to share art together, just like the [Brautigan] Library." In that, they succeeded.