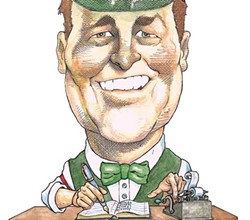 Each December for the last nine years, Seven  Days has published a list of aptronyms — that is, people's names that are apt (hence the term) to their employment, avocation or unique life circumstance.

Then there was Elias Rushing, the 19-year-old Dorset man who crashed his car into a house in Rupert while fleeing a Vermont state trooper who was trying to pull him over for speeding.

And who could forget the aptly named chocolate Labrador retriever from North Webster, Ind. — Trigger — that shot its owner, Allie Carter, in the foot after stepping on her 12-gauge shotgun.

But this year's most prominent aptronym — Trump — is various defined as "outranking or defeating someone or something, often in a very public way;" "to get the better of;" and as a noun, "a dependable and exemplary person." Clearly, one netizen took issue with that last definition and inserted her own, as a verb: "to expel gas through the anus, often in a highly audible way." We'll let the reader decide.

Other aptronyms from 2016 included:
Diane Seder: Member of the board and executive committee of the Jewish Federation of Madison, Wisc. Seder also serves on the executive committee of Hillel at the University of Wisconsin.
Ryan Newswanger: director of communications for the Vermont Humanities Council.
Tripp Murray: Managing partner at Virentium Advisors in Burlington and consultant to the U.S. cannabis industry.
Shane Mispel: No explanation necessary.
Randee Rule: Town of Hartford's delinquent tax clerk, formerly an employee at Vermont Law School.
Stan Waterman:  Five-time Emmy Award-winning pioneer of underwater filmmaking.
Robert Capers: U.S. Attorney in Brooklyn who, in December 2015, charged former Turing Pharmaceuticals CEO Martin Shkreli with securities fraud for running his company “like a Ponzi scheme.”
Milton Busker: alternative folk-pop musician from Essex Junction.
Donald Hitman: 32-year-old St. Johnsbury man charged on January 17 with first-degree domestic assault for deliberately breaking his wife’s arm.
Joshua Wolf: 33-year-old Derby resident arrested August 7 for alleged repeated acts of stalking.
Jake Butt: Tight end for the University of Michigan football team. (As Butt is 6-foot-6 and 249 pounds, make wise-ass jokes at your own peril.)
Wendy Grace: Member of Trinity Episcopal Church-Rutland, who this year accepted an appointment as Diocesan Liaison for Refugee Resettlement.
Terrance Feloney: 57-year-old Huntington man accused August 17 of two counts of violating an abuse prevention order and driving while  intoxicated.
George Price: Scientist who discovered an equation for explaining the evolution of altruism, then overnight turned into an extreme altruist, giving away everything he owned.
Rene Blais: Ascot Corner, Québec, resident who on September 16 reported his RV was  on fire on Interstate 91 in Barnet. The mobile home was ultimately a total loss.
Karen Wheeler: 57-year-old Readsboro woman whose 2005 Chrysler Town & Country was totaled after her steering malfunctioned, sending her careening off Route 100 in Stamford and striking a tree.