What Happened? A 2016 Timeline in Vermont Arts | Live Culture

What Happened? A 2016 Timeline in Vermont Arts 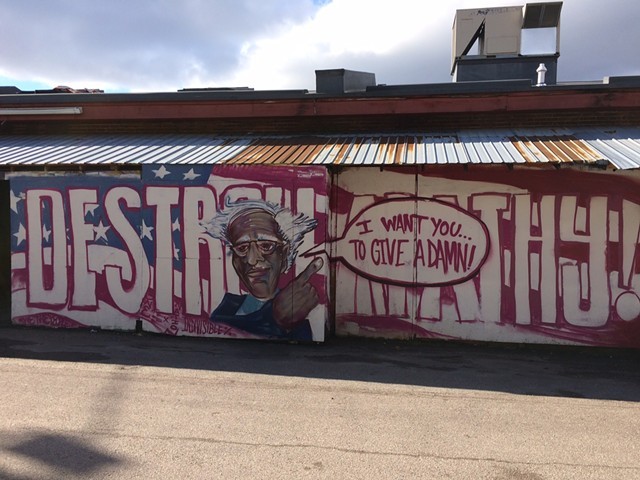 Before we take a deep breath and dive into 2017, it seems a good time to look back on the year from which we are about to graduate: 2016. This is by no means a comprehensive list, but a sampling of events, exhibits and happenings in local arts and culture. It gives us one more chance to wax nostalgic  on where we've been and what we wrote about over the past 12 months.

JANUARY
OK, this didn't happen in Vermont, but it's relevant. Remember when Sen. Bernie Sanders ran for president? As a reflection of his popularity, a Sanders-themed art show titled “The Art of a Political Revolution” — which included Vermont artists — launched in Los Angeles.

Vermont Shakespeare Company greeted the year by announcing a name change — to Vermont Shakespeare Festival.  The new moniker symbolized another step toward the nonprofit's dream of presenting a full-blown, well, Shakespeare festival. Meantime, the company went on to present several events throughout the year, including its timely production of Julius Caesar in the summer. 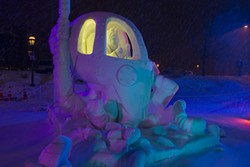 The annual Spice on Snow Festival brought Cajun heat to frigid Montpelier in mid-February.  Curated by Montpelier's Summit School of Traditional Music, the festival featured traditional folk and zydeco acts of both local and national renown.

A Defiant Dude, the documentary ostensibly about Eat More Kale guy Bo Muller-Moore and his long trademark feud with Chick-fil-A, hit another snag: a disagreement between Muller-Moore and filmmaker James Lantz about "framing" the story. 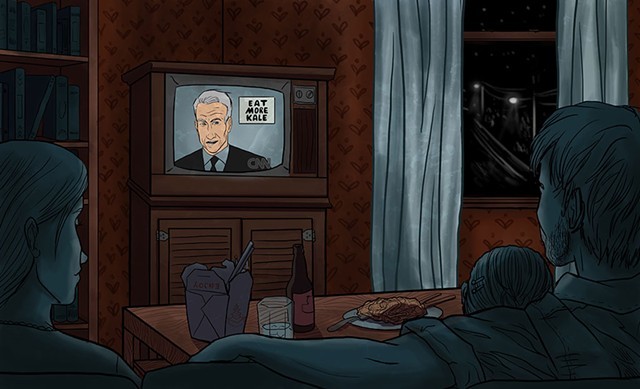 Again, not in Vermont, but we must note that some brazen Vermont artists highjacked a stairwell in New York City's Whitney Museum for a guerrilla exhibition.  Woo. 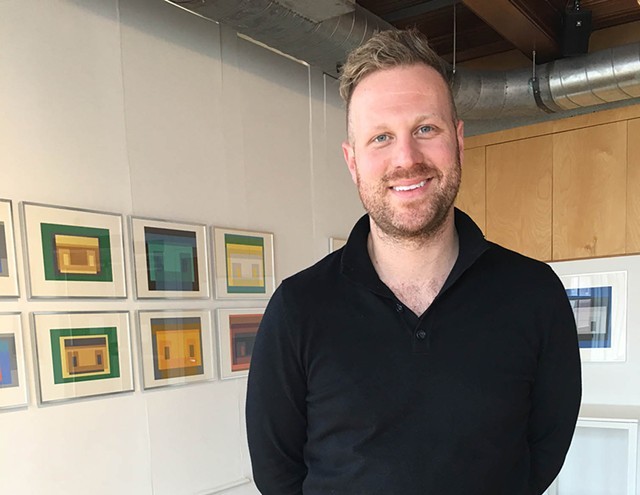 BCA Center curator DJ Hellerman announced he was departing for a new position at the Everson Museum of Art in Syracuse, N.Y.

On March 26, local filmmaker Bill Simmon finally premiered his long-delayed documentary on beloved 1990s Burlington rockers the Pants. High Water Mark: The Rise & Fall of the Pants screened to a sold-out crowd at the Higher Ground Ballroom in South Burlington. Following the film, Pants front man Tom Lawson, backed by local rockers Swale, dusted off a number of Pants favorites. Several guests offered their own renditions of Pants tunes, including James Kochalka, Heloise Williams and Guster's Ryan Miller, among others.

The Women’s Film Festival in Brattleboro celebrated its 25th anniversary.

University of Vermont professor and photographer Bill McDowell released his new book Ground: A Reprise of Photographs From the Farm Security Administration.  The images survey land and people during the Great Depression, and each engages in a "prolonged dialogue with a black dot." 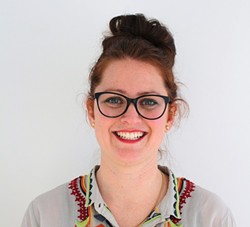 MAY
On the first weekend in May, Waking Windows 6 in downtown Winooski kicked off Vermont's festival season in spectacular fashion. The 2016 edition of the ultra-cool indie music festival was the largest and best attended yet, featuring the likes of YACHT, Speedy Ortiz, Hop Along on the outdoor main stage. Scads of local acts played at popup venues all over the city.

In Waitsfield, adjacent to American Flatbread, owner George Schenk began restoration on the farm barn, in order to create a new and improved art gallery and event space.

Americans for the Arts named Burlington's Dealer.com one of the 10 Best Businesses Partnering With the Arts in the U.S.

JUNE
The Lemon Fair Sculpture Park, at the home of Frank and Elaine Ittleman, opened to the public in Shoreham.

The 33rd annual Burlington Discover Jazz Festival had the city bopping and be-bopping — and even post-bopping — along for 10 steamy days in early June. American songwriting icon Randy Newman headed a list of great artists that also included Diane Schurr, Bela Fleck & the Flecktones, the Kenny Barron Trio and many others.

Following the death of former prizefighter and activist Muhammad Ali, California graffiti artist Jules Muck immortalized him in a mural on the side of Burlington's African Market.

Anaïs Mitchell's Hadestown was an off-Broadway hit. Seven Days headed to NYC to check it out, and wrote about the making of the musical. 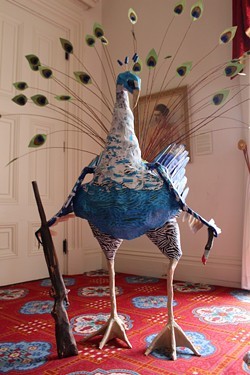 JULY
Though it happened a few months later than usual, the eighth annual Green Mountain Comedy Festival in mid-July was a weeklong laugh riot, with shows all over Burlington and in Montpelier. Headliners included Emo Philips, Sean Donnelly, Liza Treger and Seaton Smith.

Seven Days' "Feel the Bern" adult coloring contest attracted a number of entries from readers who like to color both inside and outside the lines.

Lots of local actors — with lots of fake blood — found temporary day jobs making it look real at a disaster-preparedness drill called Vigilant Guard. The federally funded exercise took place over nine days at 50 sites around the state with a cast of some 5,000..

Seven Days associate editor Margot Harrison released her debut YA book, The Killer in Me.

Frog Hollow Vermont Craft Gallery launched its new Artisan Grant Program.  To kick off the initiative, the craft center partnered with the WaterWheel Foundation (the charitable organization of Phish) for a month-long exhibition of hand-printed flags by Burlington artist James Bellizia.

The Weston Playhouse broke ground on its state-of-the-art theater compound, to be called Center for the Arts at Walker Farm, in Weston Village. 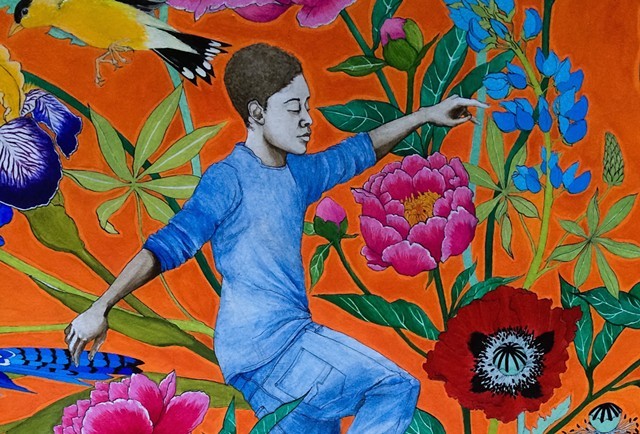 Jozie Furchgott Sourdiffe unveiled her mural in memory of her former partner Andy "A-Dog" Williams at Burlington's skatepark, which is named for the late DJ, artist and skateboarder.

Jericho muralist Mary Lacy, who made her mark on Burlington with public works around downtown, announced her 10-city mural-painting tour across the U.S. 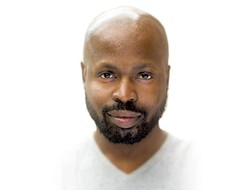 
SEPTEMBER
Grand Isle photographer and director of Burlington City Arts' Community Darkroom Mary Zompetti began photo documentation of the nooks and crannies of Memorial Auditorium, sharing the images on Instagram, in advance of BCA's departure from the aging building.

On September 4, local psych-pop phenoms Madaila closed down Main Street in Burlington for an all-day mini-festival, Madaila on Main. The show, which included performances at Nectar's and Club Metronome, featured the likes of Arc Iris, Lady Lamb, Marco Benevento and others.

The 24th annual South End Art Hop in Burlington was bigger and better than ever. We wrote about the people behind it and how it all comes together.

Glassblowers huffed and puffed at the Bern Gallery's Pipe Classic 10 in Burlington. 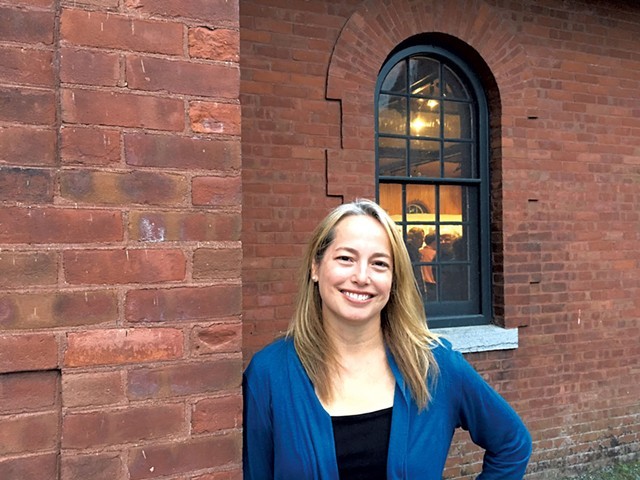 Heather Ferrell came on board as the new curator and exhibitions director of the BCA Center in Burlington.

After a year's hiatus, the Burlington Fringe Festival made a triumphant comeback at Off Center for the Dramatic Arts for four nights of fringy-ness.

NOVEMBER
Vermont cartoonist Alison Bechdel created a special post-election edition of her former comic strip “Dykes to Watch Out For.” It was published in Seven Days along with her election-themed Thanksgiving cover.

Arlington-area locals were treated to a staged concert of Perfect Picture, a musical about the life of Norman Rockwell, in an old former grist mill. With the inaugural performance, owner Dr. Joshua Sherman announced his plans to turn the mill into an arts center. 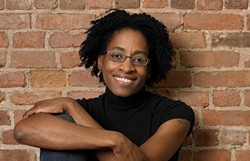 
DECEMBER
On December 3, beloved punk-rock haven 242 Main hosted its final show. The closing of Memorial Auditorium, the building that houses 242, ended the venue's 30-year run as the oldest all-ages punk club in the country.

The closure of Memorial also necessitated the exit of BCA's print and clay studios, as well as administrative offices, and the maker space Generator. Both found new homes in the city's South End.

On December 17, the Monkey House celebrated 10 years under owner Ryan Smith, during which time the Winooski night club has become a hotspot for hip, underground music. The bash featured 10 hours of  music from a slew of locals including Swale, Blue Button, Paper Castles and others.