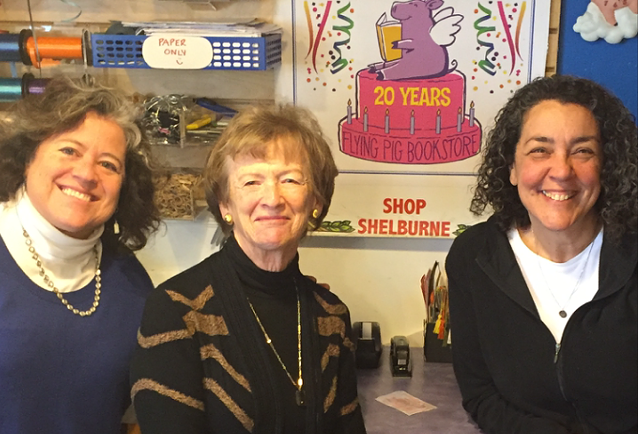 When customers flock to local shops for Small Business Saturday this weekend, one independent bookstore will be marking a milestone.

Shelburne's Flying Pig Bookstore turns 20 years old today and, on Saturday, owners Elizabeth Bluemle and Josie Leavitt will celebrate with "cupcakes, cider and customer memories," according to a press release.

Bluemle and Leavitt opened the store shortly after moving north from New York City "without jobs planned," Bluemle told me in a 2007 interview. When he saw a "For Rent" sign on Charlotte's former post office, "I just immediately wanted that building," she recalled.

The duo opened the store about 10 weeks later with a name that slyly referenced its origin as a "pipe dream," says their press release — i.e., something that will "happen when pigs fly."

That pig has been flying high for two decades now, weathering such unforeseeable market shifts as the rise of e-books and mammoth online retailers. About 10 years ago, the Flying Pig moved from Charlotte into the former Shelburne Inn building, where it now stocks more than 30,000 volumes for children — the original focus — and adults.

In 2008, the Flying Pig won the national Lucile Micheels Pannell Award for children's bookselling, and the Wall Street Journal profiled the store in 2014. Bluemle and Leavitt both write for industry standard Publishers Weekly's ShelfTalker blog. In one post, they spread the word that led to a big publishing deal for Vermont couple John and Jennifer Churchman's popular photo book Sweet Pea & Friends: The SheepOver.

With brick-and-mortar chains struggling and e-book sales leveling, indie bookstores have seen a resurgence in recent years, the Associated Press reported this past May. Before that, though, they weathered tough times, which contributed to the demise of several Burlington-area bookstores.

How has the Pig stayed aloft over two decades? "Vermonters are aware of the need to shop locally if they want neighborhood businesses to survive," Leavitt says in the press release. "And there is no substitute for in-person book recommendations, laughs and great customer service."

Customers can share plenty of those recs and laughs this Saturday — and again in January, when the owners plan to have "an offsite party ... with live music, food and general merriment." Details will be forthcoming on the store's website and Facebook page.