Radio Bean just celebrated its 16th birthday with its annual all-day music marathon. On Saturday, November 5, starting at 8 a.m, a total of 88 bands played on two stages. I decided I was going to be there. All. Day. What follows is a real-time diary of my thoughts, feelings and observations over the course of the 18+ hours I spent there.

I'm giving shout-outs to seven acts I think you should see as soon as possible, and also the seven hottest cover songs of the day. By no means was I able to see everything. Such a feat would be impossible.

8:36 a.m.: Indie rockers J Bengoy have been added last minute. Next year, I bet they play much later in the day.

"I hope this wasn't too much for you right now." — Justin Barton, J Bengoy front man

"Not enough! Not enough!" — Lee Anderson, owner of Radio Bean

Matthew Minor, the longest running employee of Radio Bean, plays one of the coolest instruments you'll ever see: the hurdy-gurdy. So this is what Donovan was singing about...

9:20 a.m.: The Le Duo present their improvised, tweaked out jazz as they riff on Peter Allen by-way-of the Muppet Show's song "I Go to Rio."

9:32 a.m.: Remember when Radio Bean had that weird cloth-towel dispenser? Yup, I'm in the bathroom.

Randal Pierce takes the stage with his accordion. Hallelujah.

Fun fact about Pierce: he played with the second group to ever play at Radio Bean.

10:39 a.m.: A big, red truck, heading north, does a sharp U-turn on North Winooski Avenue in front of Radio Bean. Yup, it's a one-way street!

10:51 a.m.: After finishing my biscuits and gravy, Lee Anderson clears my plate. I can't believe he still busses tables. What a guy.

11:18 a.m.: Act to see ASAP, #2: The Static Circus. Chill AF psychedelia, led by Kevin Bloom. You only have three more chances to see the Static Circus before they go on hiatus, so follow them on Facebook!

11:27 a.m.: My first yawn of the day. Totally unrelated to the music. It's just a caffeine crash. This is unacceptable. It's way too early for this.

11:39 a.m.: Bilingual singer-songwriter Marcie Hernandez is not a fan of winter, and don't you dare ask her about the weather.

1:04 p.m.: There are no fewer than two accordions in my current line of sight. All is well.

1:52 p.m.: Singer-songwriter Lily Sickles has a huge smile on her face as she says, "I'm gonna play some sad songs."

2:09 p.m.: Andrew Cliff and local composer Brendan Fay have angered the feedback gods. Why does this always happen when someone's about to go all "Careless Whisper" on the saxophone? 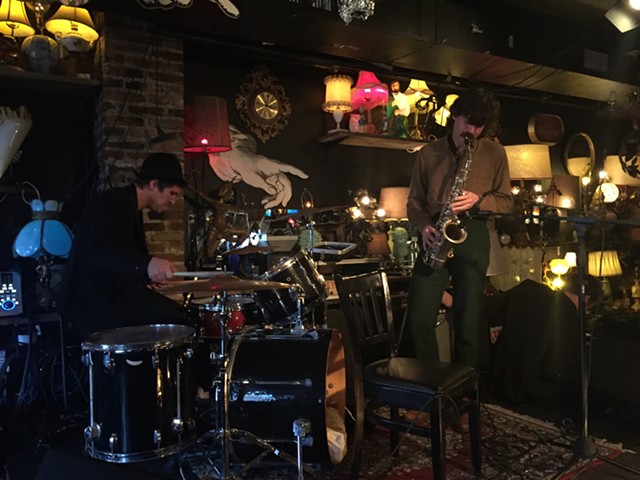 Feedback gods be damned, Cliff and Fay play their fragmented noise-jazz right over the feedback. That's rock and roll.

2:30 p.m.: Trio Gusto with Mike Martin are ripping it up with their old-world jazz. I've never really thought of the clarinet as an instrument upon which one could shred, but Geoff Kim is shredding on the clarinet.

3:08 p.m.: The Mighty Jamba do a musical interpretation of Shel Silverstein's "The Devil and Billy Markham," as read from a vintage Playboy.

3:12 p.m.: Hot cover #3: AM Radio do a rendition of Amy Winehouse's "You Know I'm No Good" that's somehow more depressing than the original.

3:27 p.m.: Random observation: The sousaphone is one of the coolest instruments, because you have to wear it in order to play it.

[Editor's note: You've been there for eight hours and only had three cups of coffee?]

3:58 p.m.: I see a chihuahua dressed as Santa Claus riding on his master's shoulders. I can't get a pic, so you'll just have to use your imagination.

What is this I'm hearing? Super auto-tuned R&B vocals and pulsing electro beats pull me away from my table in Duino Duendé. It's Cosmic Matrix.

Act to see ASAP, #3: Mickey Western. It's a slow-burn, but one of the most engaging acts of the day. Traditional country songs are brought to life by someone who seems like he's lived an interesting one.

5:30 p.m.: Kat Wright sits down next to me. We start chatting about her upcoming Seven Days cover story this week. She's "barfing" in anticipation.

"What is about to happen here?" I ask Wright, who's still hanging out.

"Cover your children's ears," she announces to the room.

Sampson starts rapping in what I'm told is a language he invented. To me, it sounds like Japanenglish. He's joined by a paper bag shark puppet, who's also a champion MC. Utterly bizarre, utterly fantastic.

[Editor's note: You're not the first person to think so.]

6:10 p.m.: Public service announcement: Honestly, it draws more attention to yourself if you duck down as you pass in front of the stage. Just walk normal.

7:18 p.m.: Caroline O'Connor's trippy, downtempo set was sax-sational. This is the kind of music that reunites estranged couples and causes a pileup in the maternity ward nine months from now.

Act to see ASAP, #5: Silver Bridget. Vermont filmmakers take note: you want Silver Bridget to score your next project. Their vaguely creepy Americana-style covers of a variety of tunes feature "vocals" by singing saw. It's one of the most beautiful and difficult instruments to play.

"Spillin', spillin', spillin' the beans." Thanks for getting that stuck in my head. He's one of the most truly goofy hip-hop acts I've seen in a long time. His track suit is to die for.

9:09 p.m.: Whoa, I've been over in the Light Club Lamp Shop for several hours. The Bean has become quite the clusterfuck!

9:28 p.m.: Ryan Miller of Guster, who now lives in our community, does two covers in a row. They're both excellent, and are a tie for hot cover #5. First, he does John Lennon's "Mother," followed by his self-proclaimed favorite song, Henry Mancini's "Moon River."

Act to see ASAP, #7: OSABA. Um, who the hell are these kids? They tell us that "they're new." They have no social media presence that I can find. They inject a furious punk rock energy at a crucial point in the evening. Also, hot cover #6: Hole's "Violet."

10:07 p.m.: There's a slight delay before Blue Button. Lee Anderson asks for anyone who wants to do something quick to jump up onstage. Brittany Dunn jumps up to tell a joke:

How do you scare a unique rabbit? Unique up on it.

I jump onstage to demonstrate something unusual I can do with my pinky. Ask me about it sometime.

Anderson demonstrates something unusual he can do with his mouth. Ask him about it sometime.

11:03 p.m.: Super Birdman arrives to sing his theme song he wrote many years ago for Radio Bean's discontinued open mic night. He gets the crowd going, and we all sing along:

11:39 p.m.: I hop out for a minute to get some air. When I come back in, I realize that we've reached peak temperature inside. Here' an example of how I know: I see a man start caressing his girlfriend's exposed lower back, then immediately pull his hand away to wipe his hand off on his pants.

11:45 p.m.: Lee Anderson says that if he were to get a tattoo of a band, it would be the Eames Brothers Band.

Anderson offers some truly inspiring words about friendship, togetherness and making art even when the weight of the world might be crushing our spirits. He smashes a flaming birthday cake into the ceiling.

12:58 a.m.: Kat Wright and the Indomitable Soul Band are doing their smooth, sultry thing so well and so tightly, it almost sounds computerized.

1:21 a.m.: The last band is loading in: Madaila. They've sadly abandoned their spandex. It's an abandex. Or maybe a spandexit. Anyway, their new outfits tie in with their new album, Traces.

[Editor's note: Read all about said new album in this week's 7D.]

1:55 a.m.: When Jer Coons stands profile, it's impossible to tell where his head hair ends and his beard hair begins. Maybe there is no beginning and end.

Anderson requests Madaila play the song from their repertoire that has the fastest beats per minute. It turns out to be a cover.

Hot cover #7: "I'm So Excited" by the Pointer Sisters. It seems fitting that it's the last song of the evening. I dance my ass off.

1:13 a.m.: Technically there are still another 47 minutes left before closing.  Patrons can choose between vinyl DJs Steal Wool and Taka. But I've been here for over 18 hours, and I need to go home and face-plant into dreamland. I had an amazing day, saw some amazing music and met a ton of wonderful people. See you there next year!