On a website called Chivomengro, a group of Champlain College students  publishes essays, cultural reviews, something  kind of like news, and original art. The tagline for the site calls it "a nonfiction semi-literary entity devoted to pasta and angst." The "about us" section says it's a "purveyor of collegiate whatever."  Despite those waggish descriptions, the site has existed since 2012, is evolving and has become more organized. But it's still angsty, and often hilarious.

Chivomengro's latest edition includes a review of Bon Iver's new album, a piece by Walter Proulx called "Fucking Space" (did you know NASA is apparently working on a way to travel faster than the speed of light?), and site manager Peter Moore's reflective essay on the indescribable nature of certain experiences. Like their writers, the pieces are a little awkward and a lot endearing. And they're smart.

Seven Days recently sat in on a Chivomengro writers' meeting to learn more about the sarcasm-heavy digital publication. The session was dedicated to cherrypicking ideas for the next issue. The writers' imminent deadline is November 14, as faculty staff advisor, site cofounder and author Erik Shonstrom reminded them.

Like most media outlets, Chivomengro gravitates toward time-sensitive topics, but that's not a fast rule. For example, one writer pitched a piece about breaking up with one's boyfriend the day before Thanksgiving and then having to attend the holiday dinner with his family.

Other ideas included a neopagan band profile, a list of women musicians of color you should be listening to, and an investigation of the female body in male-produced artworks. This writer is particularly looking forward to that last one.

The group meets like this, to brainstorm and check in, twice a week. Current editor-in-chief Jen Macneil, a junior, estimates that she and her fellow editors each spends roughly 10 hours per week editing, writing and maintaining the website.

That's a change from last year. Previously, the publication's editors accepted online submissions, then sifted through them to figure out which writers they would work with. Publication was random. This year, they switched to a monthly format.

"We were sporadic all of last year," Macneil said after the edit meeting concluded. "This year, we figured that if we take the time to sit down [and do this], the quality is going to be better and we're going to be less stressed."

Chivomengro is also focused on upping the caliber of its artwork. Art director Haley Clemens  led a short presentation stressing the importance of sourcing original artwork from their classmates and alumni. "We have so many different, artistic, expressive people [at Champlain College] and I like their style," she said, "and I think Chiv could really become a marriage of that and writing."

Clemens wrote and illustrated a piece on Satanism for the October issue. So far, the feature is Chivomengro's top batter, with more than 300 views. 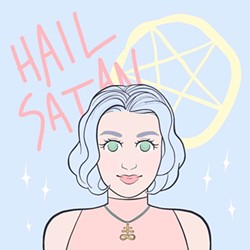 The emphasis on originality is right in line with the group's mission to serve up "mostly angst." Said Macneil, "I like to read pieces  that are about really weird, genuine moments, that come from being this age in this little college we go to."

Some of the content is personal and revealing. Chivomengro recently published a piece by Cameron Walsh titled "Ace at Life" that addresses asexuality on college campuses. That's not a commonly talked-about topic, but perhaps it should be.

Stay tuned for Chiv's next serving of angsty essays on November 21.