Dave Mills and the Anthill Collective are at it again. Last year, Mills, a Champlain College professor, led a group of students from his Aesthetic Expressions class in creating a mural on the exposed foundation of the former Eagles Club, at the corner of Maple and St. Paul streets.

On Tuesday afternoon this week, Anthill's Brian Clark and Scottie Raymond  led students from two of Mills' classes in creating a new piece on a Champlain-owned building at 40 Sears Lane. It's the future quarters for Burlington makerspace Generator, which will relocate this winter.

Aesthetic Expressions is a core class that asks students to become "aesthetically literate, able to interact critically with works of art in a wide range of media," Mills explains.

At liberty to choose a medium to focus on, Mills says he has taught about street art for the past two years for two reasons. First, students are more aware of it and thus arguably more motivated to participate and learn.

Second, he says, "In recent decades, street artists have generated both controversy and commercial success in ways that make for great conversation starters about the arts in general," adds Mills. "What is art? Why does it matter? How do art and power relate? Can artists be agents of social change? Who has rights to public space and the public image-scape of the city?"

This time, Mills asked his students to go out and speak to South End business owners and employees about what they would like to see in their mural, and then interpret their findings visually. "I wanted students to experience something like the typical design process for public works of art," he writes in an email.

Not surprisingly, the responses varied. Some wanted a mural with political leanings, some wanted it to be politically neutral. Some asked for a "badass" mural, while others opted for noncontroversial imagery. However, Mills says, the individuals polled were generally in agreement about two things.

"There was some consistency around the theme of the natural environment as a significant part of what makes Vermont a great place to live [...] and the identity of the South End as a place where industry and art combine in innovative ways," he says.

The students turned over their findings in the form of sketches to Clark and Raymond, who then created a colorful template on the wall for students to fill in.

Around the back of the building, in view of a homeless encampment, Mills let the students do their own thing. The wall was already loosely covered with graffiti. A particularly striking  example, a black face with luminescent silver hair and facial details, now has company, thanks to the students' additions. 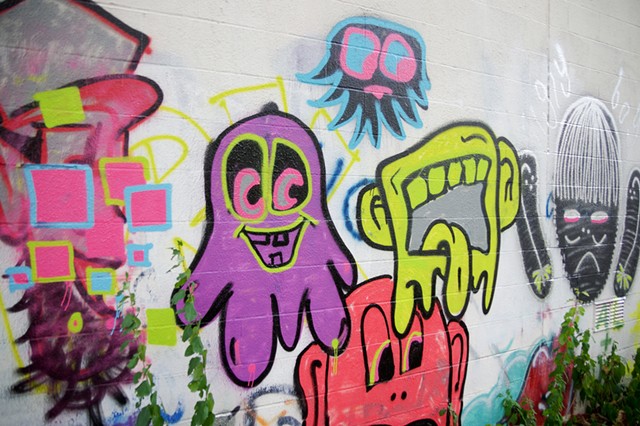 Travis Connolly  got a head start on the back wall, spraying a large tag in yellow and filling the air with the pungent smell of spray paint.

"There's bad parts of graffiti," he reflected, pausing for a moment from his work. "But people are starting to realize the more creative part of it, too."