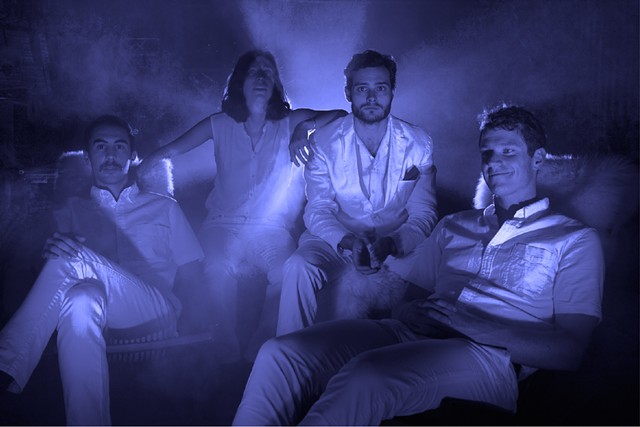 Alpenglow continue to propel themselves into the future with their dystopian, virtual-reality-inspired new video for "Flicker Flutter." Since leaving Vermont for Brooklyn, the band members have shed much of their earlier, folksy leanings and embraced psychedelia for their 2016 debut effort, Callisto. Alpenglow take their farthest trip over the electro fence with  "Flicker Flutter."
The Swimmers collective, of which Alpenglow guitarist Peter Coccoma is a member, incubated and produced the video. Directed by Coccoma, it is set in a recreational virtual reality center called the "VR Palace," where patrons can enjoy fantastical simulations … of things they could just do in real life.

We see users marveling at unremarkable events, such as standing at the end of a Coney Island pier, and sitting down to a nice dinner with friends. Presumably it's a comment on how technology is poised to infiltrate even the smallest aspects of daily life, and how the accessibility of digital experiences is rapidly overtaking all things authentic.

Callisto is available on Bandcamp.