Comedy Joke of the Week 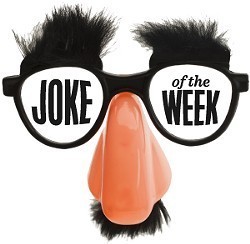 It's Monday, which means it's time for your weekly dose of locavore levity: the Joke of the Week! This week's joke comes from Burlington expat and current Baltimore resident Richard Bowen. Take it away, Richard…


"I ain't goin' out like this." — The last words of a guy who was about to go to the club but realized his outfit was whack and then died.

Says Bowen: "If I had a nickel for every time I have turned a popular phrase or idiom into a joke, I would guess that I would have 50 to 60 nickels."

Bowen writes short, simple, "stupid" (his word) jokes which he tells to strangers each and every day. He tells them on, in and around bus stops, department store intercoms, coffee shops, libraries, sidewalks, crosswalks, the phone and sometimes to the drive-thru employees at McDonald's.