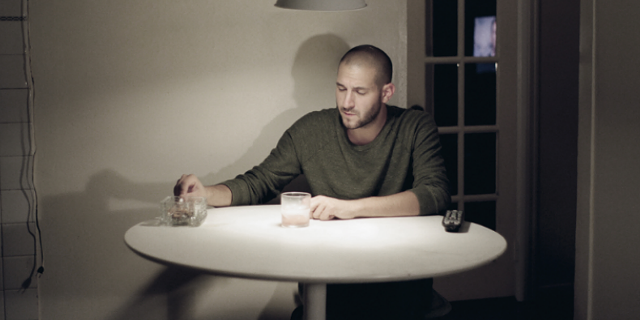 After years of fronting the New York City electronic-pop duo Holy Ghost!, Alex Frankel is taking a minute to strike out on his own. For starters, he became a business owner this year. He and his brother, Zach Frankel, along with El-P and Despot, opened Frankel's Delicatessen in Greenpoint, Brooklyn. A traditional Jewish deli, the shop specializes in brisket, bagels and smoked fish, among other fare. He's also just released first solo EP, Negative Space, on his own label ADF Records.

Prior to recording Negative Space, the Los Angeles-based production/DJ duo Classixx tapped Frankel to sing on a track for their 2016 album, Faraway Reach. This collaboration would inspire/force Frankel to produce his first solo work (more on that below) and to do so on a strict deadline, which is something Holy Ghost! rarely, if ever do. The duo's label, DFA Records,  doesn't impose deadlines, which explains HG's leisurely release history — a string of singles and remixes, two full-lengths and two EPs, including the 2016 EP Crime Cutz, since forming in 2007.

The Classixx collaboration would also lead to his current tour with that duo in support of the EP. Classixx and Frankel play on Wednesday, October 19, at the Higher Ground Showcase Lounge in South Burlington. Harriet Brown opens.

Seven Days recently caught up with Frankel by phone in the midst of that tour.


SEVEN DAYS: Both Crime Cutz and Negative Space were released in 2016. Were you working on those projects simultaneously?
ALEX FRANKEL: No. [Holy Ghost!] were working on Crime Cuts on and off for about a year. Once that came out in April, I was kind of busy working on some restaurant stuff with my brother. Around June, I hadn't started work on Negative Space really — OK, maybe I had some of the songs floating around as ideas, but nothing on paper — and then I went out to do KCRW with Classixx, to perform [“I Feel Numb”] with them. They mentioned that they were having a hard time finding an opener for their fall tour. I was kind of joking and said, “I'll do it.”

The idea was to just come out and sing [“I Feel Numb”], and to DJ. That quickly turned into putting something together for a live performance, mostly through their encouragement. I thought it would be an exciting challenge. I got to work really intensely during July and August. It was an insane rush. We mastered the EP a week before it came out.

SD: Wow. It's pretty impressive that you were able to turn the EP around so quickly since, in your own words, Holy Ghost! takes a long time to put music out.
AF: It's a totally different process working with two people. There's an incredible amount of good that comes out of compromise and taking your time. You also have to coordinate schedules. One day, someone might be really in the mood to write and someone else might not. But with this project, it was all about deadlines. It was an exhilarating, fun challenge.

SD: So, this has been a year of firsts for you.
AF: Yeah, totally.

SD: Tell me a little bit about the song “Negative Space.” Have you always
felt attracted to “the in-between” of things?
AF: Yes. I love pop music, but I don't necessarily have the skill set or the desire to go fully in that direction. What really excites me about music is more left-field production. I always like the idea of, whether in Holy Ghost! or in this project, to fit in the middle, somewhere between something that's really fun for someone who's not a music snob, and to also be really interesting for someone who has a big musical vocabulary. I'm kind of trying to balance between fun and sad: maybe a feel-good song that sounds like a feel-good song, but the lyrics are actually fighting against that. Or vice-versa.
SD: You've been in New York City your whole life. Talk to me about changes in the city, good or bad.
AF: In the ’80s, people were saying it was better in the ’60s. In the ’90s, people were saying the Warhol era was better. In the 2000s, people were saying Saint Mark’s in the ’90s was better. It's always changing. About two years ago, every post on Facebook was: "Fuck New York, there's nothing left, it's too expensive, you can't make art, it's overrun by Wall Street." And I always think of the people who can't leave. Sure, if you're not happy and can afford to just pick up and move, or you get a job somewhere,  good for you.

But to brag about it … there are just so many people who can't get away at all, because they're tied to their economic condition. You don't see those people complaining about change. Gentrification is a real issue for those who are being pushed out, but a lot of times it's the people who are causing the gentrification that are the ones using social media to complain about it. It's kind of an elitist point of view. If you don't want to be here and can afford to leave, leave. I certainly flirt with the idea of leaving. But it's where I grew up, so I'm kind of stuck here.

SD: I read that you used to be Moby’s assistant.
AF: That's true, and funny, because Moby was the one who posted on Facebook about two years ago about how New York's dead and everyone should move to L.A. I wrote back to him publicly on Facebook and said, “Dude, you can't talk like that. Not everyone can buy a ticket to L.A. on a whim. Some people have real life situations that don't allow them to just pick up when they don't like the cultural atmosphere of a city.” We kind of joked about it. But yes, I was his assistant for about a year-and-a-half. I started out as his
recording assistant, helping with the Bourne trilogy and a record he was doing
at the time. I kind of bullshitted my way into the job. I didn't really know
what I was doing, but picked it up quick. Eventually, I couldn't [keep the job],
because Holy Ghost! started traveling a bunch. He was great to me, and really
afforded me the ability to work wholeheartedly on [my own] music. Super grateful for that period of time.

SD: What's your favorite album by an artist who went solo?
AF: It would probably be a rap record. I just think of Wu-Tang. Supreme Clientele from Ghostface. All of those dudes — what they were able to do individually. I love a lot of John Lennon records, and Paul McCartney's II. That's a brilliant record. Maybe these projects don't live up to the highest moments of the band they were in, but often times it's really interesting to hear something different from them. And it can make it really exciting when the band comes back together.

SD: If you were to produce a Classixx-style album, with a different vocalist for each track, who would you be your fantasy cast?
AF: The Alessi Brothers, if you can still get them. Amber Coffman from Dirty Projectors. I love Julian Casablancas’ voice. I’ve always wanted to be in a room with Pharrell. Also, this dude we're on tour with right now, Harriet Brown. He has a phenomenal voice.

SD: I noticed your tour schedule ends right before Halloween. Any spooky plans?
AF: No, I'm looking for gigs. You can put that out there. I can't remember the last time I didn’t have a gig on Halloween. I'm working on a “Stranger Things” costume with a friend.

SD: That's awesome. Who are you going to be?
AF: I'm going to be Eleven, because I recently shaved my head. And my friend looks exactly like Steve.

SD: Are you aware of the other Alex Frankel?
AF: Um, that sounds like an ominous question. No, I'm not.

SD: He's a tenor opera singer. You should do a track with him.
AF: Yeah, like a Frankel vs. Frankel.

SD: I know you just opened a deli, but do you have any other fantasy business venture ideas?
AF: I wish there were gyms in airports. I don't understand why someone hasn't put a gym in an airport, so you can work out and take a shower while you're on a layover. That's one of my harebrained schemes.

SD: Tell me something you could never live without, and it can't be related to making music.
AF: Friends. I'm a really social person. I need encouragement, and I need positive reinforcement. I'm always talking to people, whether I'm working on Holy Ghost! or [my solo work], almost on a daily basis, to send [them] new mixes and ask for help. Even though Negative Space is a solo record, it's a collaboration between a bunch of close friends. And, I know this goes against your question, but I can't live without the piano. If I don't have access to a piano, I get a kind of homesickness. I don't need to record music, I just need a piano.