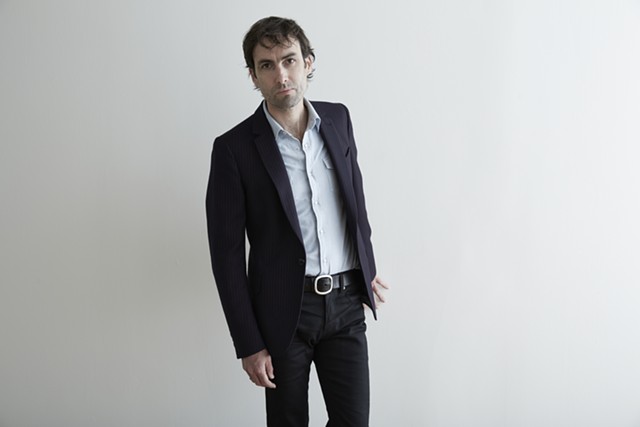 On his latest record, Are You Serious, Andrew Bird gets, well, pretty serious. The album, released in April of this year, came on the heels of a series of profound life challenges — the most significant being his wife's treatment for cancer. The songwriter/singer/violinist/whistler extraordinaire has long been known for a whimsical streak bordering on ethereal in his writing and composing. But Are You Serious represents some of Bird's most deeply personal and direct songwriting. It is beautiful and unsettling and reaffirming all at once.

In his typically eloquent and insightful manner, Bird has spoken at length about the heavy circumstances surrounding the record. (Such as here. And here. And here.) So when Seven Days recently spoke with him by phone, we thought we'd digress to some (mostly) lighter topics. Maybe give the guy a break, y'know?

Ahead of his show at the Higher Ground Ballroom with Sinkane on Monday, October 10, we chatted with Bird about Muppets, whistling, his cool new Facebook Live video series “Live From the Great Room” and gun control — see: “(mostly) lighter,” above.

SEVEN DAYS: This year you partnered with [gun control advocacy group] Everytown for Gun Safety. Why did you choose to work with them, and why do that now?
ANDREW BIRD: I don't remember exactly what it was, but there was a particularly rough patch of shootings. And it's really been in the national dialogue. I kind of threw up my hands a little bit, like, It's gonna be a tough one, the solution to this problem. I was skeptical about whether gun control by itself could really solve the problem. Every day there are more humans rubbing up against each other, and the majority of them are armed. There's gonna be flare-ups. But there are so many situations that shouldn't be lethal but are.

Anyway, I decided it was lame to just be like, “Oh, what can you do?” So I got involved with this group. I like their common-sense approach to things. They understand the whole landscape. They're not reactionary. They're careful not not to say, “We're gonna take your guns away from you.” Because they know that won't get them anywhere.

It's a really complicated issue, because guns are very symbolic to Americans for some reason. Which I have some problems with. It's just a machine that throws this object through the air really fast that kills people. It's not more than that. But somehow the Second Amendment is established in our country as this assurance of liberty and protecting oneself against tyranny. I don't know if I buy that.

So we made that video with “Pulaski at Night” to show how it's affecting our youth and our whole mind-set and what kind of damage that's doing, whether any shots are fired or not.
SD: On a lighter note, your career has taken you all over the world. You've played Carnegie Hall. You've collaborated with, like, everybody. But I have to think that working on not one but two Muppets projects is a career highlight, right?
AB: It was a big deal for me, yeah. I grew up with the Muppets. It was such a mysterious, strange show. And it had such an aura around it, and the humor was so dark. I love that kind of musty, ’70s vaudevillian… I mean, “The Muppet Show” was a throwback to vaudeville. Or a send-up of it. And the songwriting was very Tin Pan Alley. It's old-school.

When they asked me to do “The Whistling Caruso” [for the 2011 film The Muppets], I knew the director's [James Bobin] comedic timing, and I respected it. So it was really fun to do revisions. Usually, it's a drag. But he was like, “You have to do this super serious and earnestly, so earnestly that it's funny.” It was fun.

I wrote a bunch of songs for that movie, but they all got rejected because the music supervisor wrote all the songs. I didn't know that was the setup, so I wrote all these songs. But it was no great loss. I got a lot of good material out of that, some of which I repurposed.

SD: Hold on. You used Muppets material on other albums?
AB: I did. A lot of it ended up on Break It Yourself. You change references to purple fur or whatever.

SD: I think that completely changes the way I'll listen to that album from now on.
AB: “Lazy Projector” was written for Kermit.
SD: You did an album of songs by the Handsome Family [Things Are Really Great Here … Sort Of, 2014]. Rennie Sparks has said that hearing your versions of his songs has given him a new understanding of his own work, which is pretty cool praise. Is there an artist you would most want to have cover you?
AB: Oh, man. That requires some thought. Let's come back to that?

SD: Sure thing. How can I become a better whistler?
AB: You have to have the right physiology. People have different types of tongues that lead to different techniques. It's completely intuitive. You can't reach into someone's mouth and say, “Do this.” You have to have a good ear, because there's no frets or anything.

You can develop your ear by whistling all the time, matching pitch or whistling along with something. I whistle whether I'm in a good mood or not. If I'm not eating or talking or sleeping, I'm pretty much whistling.

SD: Has that created problems for the people around you?
AB: It makes them think I'm in a better mood than I might be. It has annoyed siblings and girlfriends over the years at times. Because it's incessant.

SD: What was it like working with Charlie Louvin?
AB: You could tell he could be a difficult man. And if you're female, just … um, watch your back. He was kind of a dog, as far as that goes.

SD: Yikes.
AB: Yeah … I don't wanna knock the guy. His music is beautiful. He was just from a different time, for sure.

SD: Where did the idea for “Live From the Great Room” come from?
AB: Well, I've never had a house before. And what made me want this house was this room. It's a two-story room with this wood ceiling, and the acoustics are phenomenal. It's very inspiring and flattering to your voice, as long as it's no more than two people.

So I thought it would be cool to have an excuse to have sort of a talk show and an excuse to throw myself into off-the-cuff situations with musicians I admire. I need to force myself to engage the music community sometimes. Left to my own devices, I stay in my own head. So it's good to create this context for it. And I like reacting to someone else's music.

And it's interesting depending on the type of musician that's there. I had Chris Thile and Blake Mills, and we could just wing it. But the last two guests don't play an instrument at all. And I play violin, which is not exactly a supporting instrument. So I had to work my ass off to support them, which is really cool. And I end up coming out with a greater appreciation of their process.

SD: Circling back, any thoughts on who you'd want to cover you?
AB: Someone who's just a really badass singer. Like Sharon Jones or PJ Harvey. Or Björk.