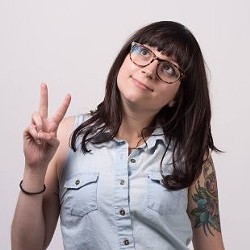 Amy Nicole Schwartz sums up her job as "basically dick jokes and boxes." As design director for Cards Against Humanity, the  wildly successful and hilariously inappropriate party game, and its "boring business company" spinoff,  Blackbox, Schwartz  sets the creative vision for her companies' games, projects and subversive PR campaigns.

Believe it or not, there's more to her design responsibilities than laying out black-and-white game cards that read, "Toni Morrison's vagina" and "Watching an orphanage burn" in Helvetica Neue Bold.

Schwartz, considered a rock star of sorts in the graphic-design world — winner of Command X at the 2015 AIGA National Design Conference, Emerging Designer Award by AIGA Chicago, Finalist for Young Designer of the Year, yadda, yadda —  spoke Monday afternoon to students and faculty in the Champlain College Graphic Design & Digital Media program. More than 100 people attended, including many who clearly weren't graphic designers — or students.

Schwartz began her hourlong presentation, which she titled “Strong Opinions,” with the disclaimer that she wasn’t there to boast about her impressive portfolio or give her fellow millennials a heaping spoonful of pointless career advice such as “quit your job and follow your dreams.”

She then ran down a list of companies she's worked for, and shared a lot of opinions that sounded suspiciously like advice, such as, “People are your most valuable resource,” “Networking equals friendship,” and “You know what’s right for you.”

Perhaps Schwartz was just being deliberately ironic, in Cards Against Humanity's signature super-serious voice. Granted, as a fiftysomething print journalist who doesn't play video games, read comic books or watch B-list horror flicks — all of which Schwartz cites as creative influences — I wasn't her target audience. By  22 minutes into her talk, when she offered up "opinion No. 5: the thesis is the work," I was ready to call it a day.

But then Schwartz's talk got interesting. That's largely because she dropped the this-is-an-academic-lecture-to-aspiring-graphic-designers  shtick and provided a glimpse into how much fun it is to work for Cards Against Humanity. The game began in 2011 as a Kickstarter project by eight high school friends from the Chicago suburb of Highland Park.

"With Cards Against Humanity, we're all about jokes," Schwartz explained. "We say that we don't make jokes to make money. We make money to make jokes."

That means the company's games, online promotions, mail-order campaigns and random products are a vehicle for making people laugh, while also subverting  their consumerist expectations and occasionally delivering a political message, too.

As design director, Schwartz's job is to make sure that all  those jokes stick the landing.  Sometimes that means using Cards Against Humanity's über-earnest tone for saying grotesquely funny shit that fans have come to love, and expect. But other times,  it's about creating a different but equally irreverent voice, as the company did for its Black Friday 2014 campaign.

"We hate Black Friday. We hate it a lot," Schwartz explained. But as a consumer-products company, CAH must also sell things to stay afloat. So the team found an ingeniously subversive way to critique the former while simultaneously doing the latter.

The day after Thanksgiving that year, the company sold bullshit online — not the metaphoric mendacity that Trump spews, she said, but actual, pasteurized, odor-free bovine excrement. It was shipped in the same boxes, and from the same company, that Apple uses for its iPhones.

"We charged $6 for it and sold it to 30,000 people," Schwartz  said.  The company donated all profits from its Black Friday poop sales to the nonprofit organization Heifer International.

Challenged to come up with something even bigger and bolder than bullshit in a box the following year,  CAH  took down its online store on Black Friday and invited consumers to give $5 to the company — and get nothing in return. The joke was literally "Buy nothing on Black Friday." Some buyers — or more accurately, donors — expected they'd receive something for their cash, though the website provided no field for entering a shipping address. Nevertheless, the company took in $71,000 in one day, then split the money among its 20 non-founding employees, including Schwartz, and gave them an hour to spend it.

"I woke up the next day and a screen shot of how I spent my money was on the news, which was really bizarre," Schwartz recalled. She donated to a Chicago-area food bank, adopted a bat named "Little Dracula," from a national bat sanctuary, bought a new winter coat, paid down 1 percent of her student loan and treated herself to a PlayStation 4. "Thanks, strangers of the internet!" she announced.

Considering that Schwartz's talk was held on the same day as the smackdown between Hillary Clinton and Donald Trump, Schwartz waited until nearly the end of her remarks to broach the subject of CAH's unmistakably left-leaning politics.

One project the company launched came as the primary season was just getting under way, as copycat companies began launching Cards Against Humanity-like games to rip on  Trump. Rather than piling on with more of its own jokes about the Donald's hair, Schwartz and the rest of the CAH crew came up with the idea of a survival kit for the impending Trumpocalypse.

The Donald Trump Bug-Out Bag included, among other goodies, a harmonica "to entertain your fellow wastelanders with songs of the old days";  a flint and steel "to help you start a fire to warm your cold and terrified family"; a gas mask "to protect you from the red dust while you scavenge for scrap metal"; and a "golden locket with a photograph of former President Barack Obama."

The company rush the product to market in a week's time — some were actually seized in China as suspected counterfeits, Schwartz said — and sold out 10,000 units in no time.

Further subverting consumer expectations, CAH's election-themed expansion packs allows consumers to choose between a Clinton or Trump box, with the online sales tally seemingly showing which candidate will get the donation. At the end of the promotion, the website explains, Cards Against Humanity will tally up the sales of both packs and, depending on which one gets more support, will donate all the money … to the Clinton campaign.

"You can imagine the emails we've gotten," she said. "It's been interesting."

CAH also created a Super PAC called the "Nuisance Committee" to erect billboards and other social messaging targeting the GOP nominee. As Schwartz explained, the name is a historical nod to World War II survivors. The grandfather of Max Temkin, one of CAH's founders, flew in a B-24 bomber that was shot down over Germany  during the war. While in a POW camp, he and fellow Jewish prisoners, frustrated that they couldn't fight Adolph Hitler anymore, created the Nuisance Committee to stir up trouble to occupy their Nazi captors.

"The whole thing was about distraction," Schwartz said. "And that's kind of what we're doing, too."

Lest you're wondering, two of Schwartz's favorite Cards Against Humanity cards are "Soup that's better than pussy," and "A decent bagel."

A nice Jewish girl at heart.