Artists Howl for the Anthropocene

In her 2014 Pulitzer Prize-winning book The Sixth Extinction: An Unnatural History,  New Yorker staff writer Elizabeth Kolbert  chronicles the present-day realities of a very unsettling topic: human-induced mass extinction. Her book was assigned by the University of Vermont to the incoming class of 2020. In conjunction with this Summer Reading Program, UVM hosted Kolbert on campus on Wednesday, September 14.  Her lecture at Ira Allen Chapel was followed by a new kind of art event: a "howl."

Immediately following Kolbert's talk, and housed in the nearby Billings Student Center, the "6X HOWL" pop-up exhibition featured visual art, performance and interactive works meant to complement the urgent environmental concerns raised by Kolbert  — and to give audience members a place to decompress.

The howl marked the public debut of BASTA!, Bridging Art, Science and Theoretical humanities for the Anthropocene. The loose group of Burlington-area professors, graduate students and community members was initiated in fall 2015 by UVM environmental studies professor Adrian Ivakhiv. He teaches courses including Environmental Literature, Arts and Media, Nature and Culture, and Eco-politics and the Cinema.

The word basta in Spanish means "enough," as

in, ¡Ya basta! or, enough already! Politically, it is associated with expressions of dissent.

"Enough of business as usual," Ivakhiv commented. BASTA! is meant to "galvanize conversations about what a community like Burlington ought to do to address the climate crisis," he says, from invasive species in Lake Champlain to hosting refugees, whom Ivakhiv notes are often displaced because of climate change-related factors.

The group not only bridges traditionally siloed academic disciplines but brings together educators, scholars and artists across institutional lines. The Howl included members of the UVM, Champlain College and Saint Michael's College communities.

For his "Monarch Release," St. Mike's professor Collier partnered with UVM professor Davis and her students to release 300 paper "monarchs," powered by rubber bands, into the apse of the Billings Center, fluttering onto viewers below. Glass-encased monarchs from UVM's Zadock Thompson Zoological Collection sat on a pedestal in the center of the room.

In the surrounding study alcoves, Collier distributed an informational postcard about the decline of the butterfly population, along with milkweed pods — a pollinator-friendly plant. "The most charismatic invertebrate is the monarch," Collier slyly noted. 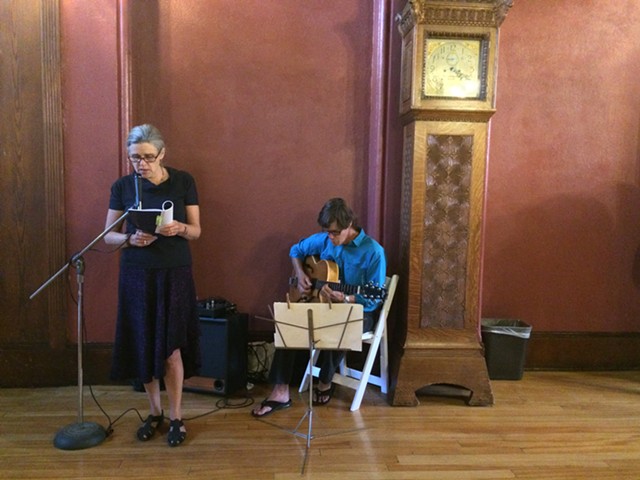 Like Collier, Davis is both educator and working artist; her work will be included in the upcoming BCA Center's "Of Land & Local" exhibition, "Watershed."

"I'm always looking at the grief part of this time," she said of the Anthropocene. Davis also suggested hope, however, by mentioning Australian scholar Glenn Albrecht's essay "Exiting the Anthropocene and Entering the Symbiocene." Albrecht posits the present time period as a brief, historical turn towards a more sustainable future.

"[The Howl] is a response to the doom and gloom of the sixth mass extinction," said Erica Gilgore, a UVM senior double majoring in environmental and global studies. "It's meant to help process, in a comedic and beautiful way." Gilgore got involved in the event through environmental studies professor Amy Seidl, for whom she is an assistant.

Another of Seidl's students, Emily Peters '17, donned full beekeeper garb to distribute samples of honey harvested from her professor's Huntington beehives. Guests were also supplied with cookies made from cricket flour by Tomorrow's Harvest, along with the more standard art-reception fare.

Though academically trained in entomology and ecology, Seidl told Seven Days that she finds art to be absolutely necessary in communicating the ideas of science, and to envision the future. Its dual experimental and educational potentials, she said, offer "a great arena to flex our emotions around these oftentimes despairing conditions."

Morehouse and Nelson created "Compose/Decompose," in which guests were invited to compose messages to the future on paper, and then deposit them into a Plexiglas-paned compost bin for decomposition. 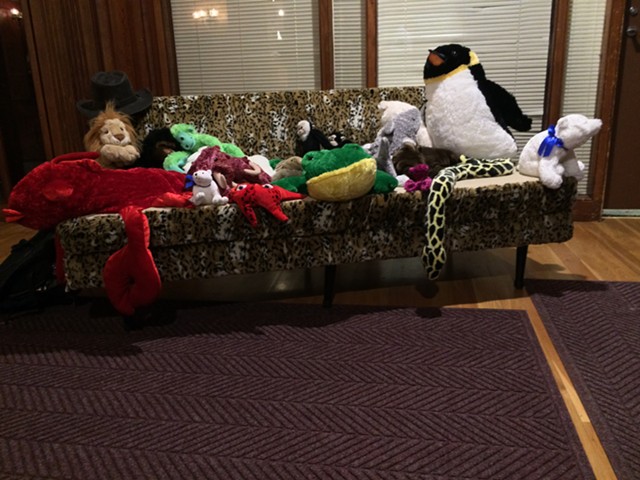 Should it all prove to be too much, visitors could rest on Marrs' "Stuffed Animal Therapy Sofa." The cozy, inviting furniture/sculpture was adorned with a menagerie of cute plush critters. Nearby, though, Brooklyn-based Marzec's "Apocalypse Weather Report" played on a loop, informing viewers that today's risk of apocalypse is "high."