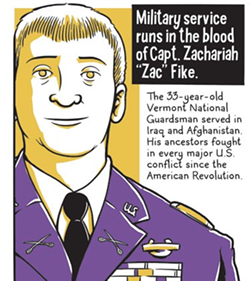 It's not every day that Seven Days has reason to update a story from its annual Cartoon Issue. Then again,  Capt. Zachariah "Zac" Fike's story, which was featured in the 2014 Cartoon Issue, is not like many others.

Fike, 35, is a full-time, active-duty member of the Vermont National Guard and the founder of Purple Hearts Reunited. The St. Albans-based nonprofit is committed to returning those military medals, which are awarded to combat veterans wounded or killed in action, to their rightful owners or the owners' next of kin.

This year, Fike's efforts came to the attention of the Military Times, which annually accepts nominations to honor the community service of five military personnel chosen from the ranks of the Army, Navy, Air Force, Marines and Coast Guard. For his efforts on Purple Hearts Reunited, Fike was selected as the 2016 Soldier of the Year, the first National Guardsman ever to receive that honor.

Fike and four others will be honored in an awards ceremony on Capitol Hill on July 14, attended by top military brass, members of Congress and other military and civilian dignitaries. "It was a big surprise," said Fike in an interview this week with Seven Days.

Fike started on this path on Christmas 2009 when his mother, herself a former army drill sergeant, gave him a Purple Heart as a gift; she'd purchased it in an antique shop for $100.

“I’m a military collector," Fike said in a 2014 interview, "but the Purple Heart is different, something that shouldn't be bought and sold on the open market. It didn’t feel right to me to own it.”

After having returned from his own military deployment in Afghanistan in December 2010, Fike set out to reunite the gifted Purple Heart with its rightful owner. When he found himself receiving other Purple Hearts in the mail, he launched the nonprofit. Working entirely in his free time, mostly nights and on weekends, he has since reunited nearly 300 medals with their rightful owners or the owners' family members.

Each medal is professionally framed and delivered with a medal certificate, an American flag and a letter from the president of the United States. There's no cost to the families, about 80 percent of which choose to receive the medal with a full "Valor Guard" ceremony performed by uniformed service members. 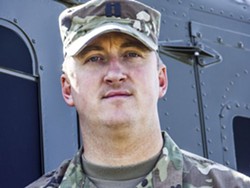 Fike's work is not done yet by a long shot. Every time the media covers one of their medal returns, he  and his volunteers receive an average of 10 more medals in the mail. People don’t seem to know what else to do with them.

Because many of those medals date back to World War I, Fike decided to do something special for next year's 100th anniversary of the U.S. entry into that war. He took an inventory of the World War I medals that have yet to be returned and found exactly 100 of them.

The World War I  100th Anniversary Tribute Project is now working with three researchers, who have divided the country into three regions. Each is directing a group of volunteers to research and return the medals. Nearly 40 families have already been identified, and 10 medals have been returned.

Next month, Fike notes, the Village Frame Shoppe & Gallery in St. Albans City, which frames the Purple Hearts for the nonprofit at a discounted rate, will clear out its gallery for a display of all the remaining World War I medals. The gallery will charge a small fee to recoup some of its framing expenses, which already run $12,000 to $15,000.

The display will be like "a walk through time,” Fike says, featuring period uniforms, audio recordings of military speeches from the era and other memorabilia, as well as bios and photos of all the medal recipients.

“I’ve never seen or heard of this many [Purple Heart] medals in one location," Fike adds, "so it could be the first of its kind.”

Along with running the World War I project, Purple Hearts Reunited is still returning medals recovered from other wars, ranging from World War II to Iraq and Afghanistan. The group has already done 30 normal returns this year, and Fike projects they will do another 150 to 160 by year's end. Even with a full-time development director and several dozen volunteers around the country, he says, it'll be a financial and logistical challenge to pull it off.