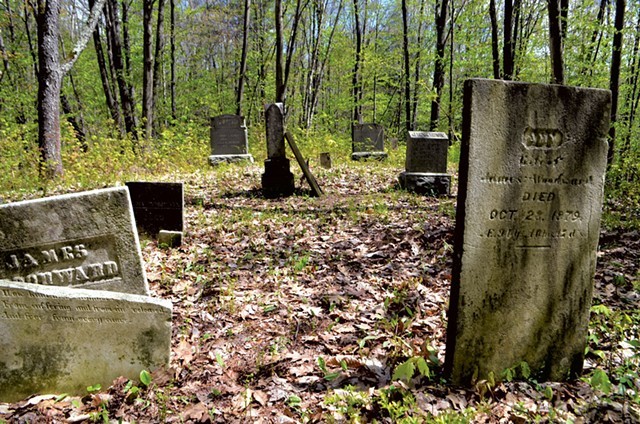 A veteran of the American Revolutionary War buried in Waterbury will get a new headstone courtesy of the Veterans Administration. That's thanks in part to Seven Days readers who inquired about the long-abandoned cemetery for a recent "WTF" column.

The May 25 article, "What's the Story With the Hidden Cemetery in Waterbury?" explained the origins of the Johnson Cemetery visible from I-89, as well as the desecration of the grave of Zachariah Bassett, a Revolutionary War soldier, sailor and prisoner of war.

In May 2011, Mark Backus, an amateur genealogist living in Bristol, went to visit the grave of Bassett, his fifth grand-uncle, only to discover that his 19th-century marble headstone had been snapped off at its base and stolen. Backus reported the theft to the Vermont State Police but the headstone was never recovered.

Shortly after the publication of that story,  a member of the Vermont Society of the Sons of the American Revolution contacted Seven Days to get in touch with Backus. The "male lineage society" and historic/patriotic nonprofit is dedicated to keeping alive the spirit and memory of those who fought in the American war for independence — including the 174 veterans of that war who are known to be buried in Vermont.

According to VTSSAR member Whitney Maxfield of Barre, the organization had previously learned of the desecration of Bassett's grave and wanted to submit a claim to the VA to get the headstone replaced. However, because the VA requires a surviving descendant to sign for the replacement stone, and VTSSAR was unaware of any, no paperwork was ever submitted.

But after the Seven Days story, Maxfield contacted Backus and began the process of getting a replacement grave marker, at no cost to Backus or his family.

“We just found Mr. Backus down in Bristol, who is a relative — not a direct descendent but close enough," Maxfield said in a recent interview. "So we will be submitting paperwork to the VA to get them to cut a new granite marker for Mr. Bassett. It's about time something got done."

Maxfield, who has at least 16 known ancestors that fought in the Revolutionary War, wasn't previously aware of Bassett's story. In 1778, the Milton, Mass., native was an American sailor aboard a captured British frigate that was later recaptured by the British. Bassett spent nearly four years in a military prison in  Plymouth, England, before being released in a POW exchange. Bassett later settled in Vermont, where he lived  until his death in May 1853.

Although Maxfield conceded the VA will likely only cover the cost of a simple grave marker and not an elaborately carved marble monument like the original, Backus said he's appreciative nonetheless. And, when asked whether the new stone will be cut from locally produced granite, which cannot be as easily broken, Maxfield said, "Oh, definitely!"

He couldn't offer a time frame for the new stone's arrival. As Maxfield put it, "You know how government bureaucracy goes.”