In the heart of the Green Mountains, a sun-swept field vibrates with the enthusiasm of a thousand devotees of broadswords, mead and medieval attire. Maidens in ankle-length dresses and pushup bodices, accompanied by young sires trussed up in leather and the occasional feathered cap, clamber out of dusty Subarus and F150s to attend the Vermont Renaissance Faire, held June 25 and 26 off Route 108 in Stowe.

Three score pop-up tents cascade across a broad grassy plain, purveying everything from herbal potions to Celtic crosses, from candles and lambskins to goblets and magic wands. A fenced-in mead garden offers Vermont-made spirits, cider, beer and mead to beat back the rising heat of midday, while the back side of the field is begrudgingly given over to hot dog, burger and kebab sellers. (Because, really, who would want to eat what they ate in the 1300s?) 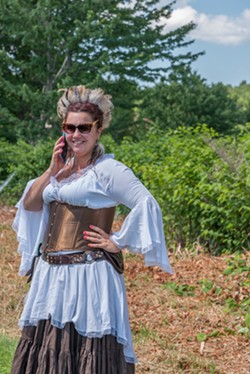 A buxom twentysomething passes by in a leather halter top and short shorts. “It’s warm,” she says to her boyfriend. “Makes me wish I wore less clothing.”

The crowd here is one that might be defined somewhere on the far side of eclectic. Nerdy and fun-loving, most seem likely to be obsessed with "Game of Thrones." “Everything about that show is awesome,” a bald, Amish-bearded young man confesses while we share the shade of his umbrella.

Yet there is also the sense that participants see this whole “RenFaire” thing as a self-deprecating joke, sort of a meta jibe at their own willingness to pretend that the 1600s were not so much a time of squalor, black death and near universal poverty, but a frivolous era of miladies and milords, when e’s were in such surplus that they would be randomly tacked onto the ends of wordes. You know, for the quaintness of it.

Then again, maybe it’s just a great excuse to go public with a pirate costume, or a plunging neckline, or to walk around inside that metal helmet you forged in the garage last winter. 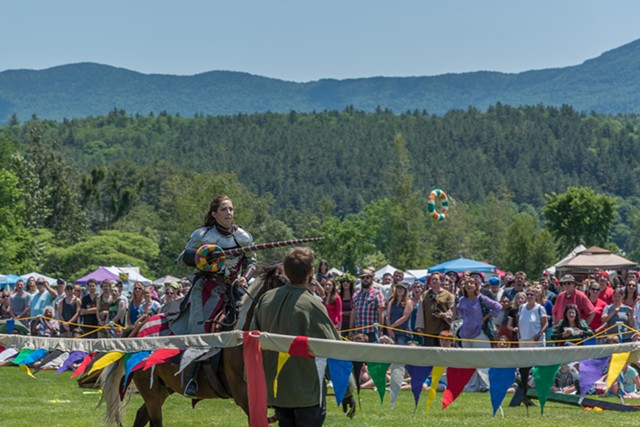 Really, it’s all about dressing up, pretending and having a good time — and the mirth is a bit infectious. It’s hard not to smile at a groan-worthy pun like Songs of Warship, a CD offered by Below the Gaff, a pirate-themed music group from Northampton, Mass. And you can’t not explore a tent called Knotty Stuff, where Holly and Scott King of Morrisville offer all manner of wooden Celtic knots and jewelry. The faire is the brainchild of recent Vermont bounce-back Jeffrey Folb. He says he and his wife have been involved with faires for 20 to 30 years. “I’ve done the vending, the fighting, the acting, the marketing,” he says. “And my wife and I moved back up to Vermont and realized there was not a faire here, so we decided to set one up. We started looking around for a venue, and someone suggested Stowe.”

The town was “ecstatic” about the idea, Folb says. And so, about a year ago, the couple decided to pull the trigger, tapping into their years of contacts in the “Rennie” world, convincing vendors and performers to take a risk on a first-year faire.

By all accounts, Folb says, it has been a resounding success. “About half a dozen vendors sold out on Saturday. We had more people through the gate in the first day than we expected for the entire weekend. And we had tons of kids, which is great for vendors.

"Vermont is great, and there is so much going on, but it seems like it is beer festival this, bike and beer that," Folb observes. "Where are the family events that you can take a 5-year-old to and everyone can have a great time?”

The first day of the faire saw about 2,200 attendees, Folb says, and he expected that Sunday would hit about three-quarters that amount. By his estimate, about a third of the attendees are Rennies who have been to a faire before, but the vast majority “have never seen something like this in their life.”

As a result, not only are vendors happy, but so are the performers. Several have told him that they've “gotten better reactions here than they have seen at other shows in recent years,” Folb says. He attributes that in part to the state being a virgin market, with no competing Renaissance Faires. But he also credits great weather and Stowe's welcoming reception.

Folb is sitting in his car with the AC on as we chat by phone. “I’m looking out at the parking lot,” he says, “and I see this little girl walking in with fairy wings on, and she has no idea what she is about to see. And when she comes back out, her eyes are going to be huge. That’s priceless.

“If you can make money and make people happy,” Folb adds, “that’s what you want to do.”

The broad swath of the Renaissance (14th- to 17th-century Europe) allows for plenty of diversity and interpretation. And so there are bagpipes and men in kilts, a young fellow wearing Spock ears, an escapee from Avalon who calls herself simply “Splinter,” a bawdy minstrel, madrigal singers, a fun-loving woman in period dress who goes around dousing sassy kids with tankards of icy water, Vikings, a mermaid, pirates, toga-swathed teens from Essex Junction who call themselves the Donut Clan and, naturally, a unicorn. Because, seriously, where would you be without a unicorn? But what people are really here to see is the fighting — the clash of metal on metal, swords crossed and blood spilled. That and the horseback riding, so long as it involves violent assaults on wooden panels, hay bales and defenseless vegetables. Which is all in good fun, of course.

Spur of the Moment, an equestrian group from New York, rises to the challenge. Their riders slash at celery and peppers and trim cucumbers while riding full speed in the saddle. Or, at a trot, they thread candy-striped jousting poles through neatly tossed rings.

Four members of the Brotherhood of the Arrow and Sword, which goes to faires all over New England, fearlessly don 60 pounds of metal armor to bash at each other with real swords and poles. But not without some justifiable bragging about the weight of their attire in this heat.

Several of the Brotherhood are teachers and instructors in real life who desire, says Sir Brian Decatton (“we have to use our stage names, for legal reasons”), to make their work educational. He and Master Marcus Boyer have been at it for 20 years. “We cover the whole range, from 1360 to the War of the Roses,” Decatton says, “to show the evolution of warfare, armor, weapons, what it was like on the march.”

Surely life on the march was nothing like this. Sitting about in clean, well-constructed tents showing a fellow in Spock ears how one crafts a bow, or giving a sword-fighting lesson to a sunglass-wearing, heavily tattooed millennial who is trying very hard to look cool. It’s ridiculously hard to play it cool or straight when all around you people are in 14th-century costumes. And you never know who is going to stay in character and reply to you with a "thou" or a "doth," which just makes you feel silly, even though you're pretty sure they're the ones who should redden for talking like that in 2016.

So, it’s best to just go with it and have a good time. And be sure to stop at the booth offering free samples of mead. Maybe a few times.

You can see all of Paul's RenFaire photos here.