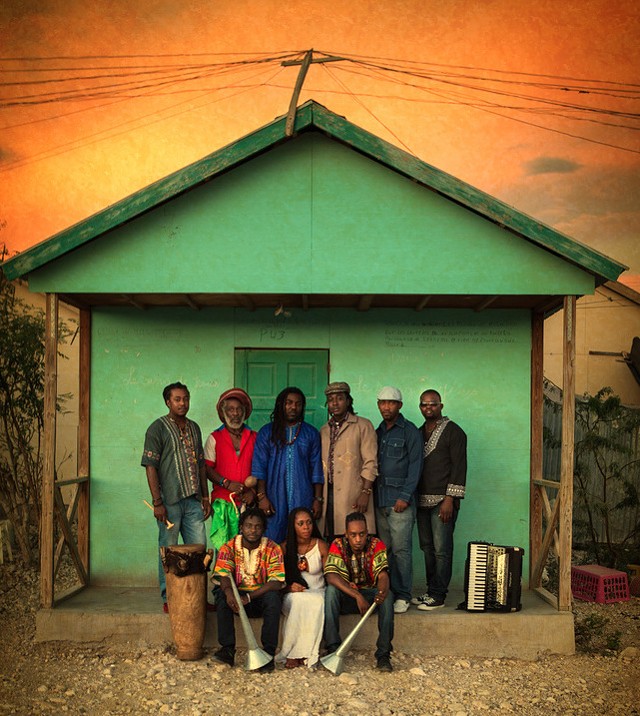 In January 2010 a 7.0 earthquake struck the small Caribbean nation of Haiti. Yet, amid the devastation, something surprising emerged: hope. During the day, volunteers from around the world worked to clear the wreckage. At night, the sounds of singing and drumming could be heard floating above the din. This resiliency in the face of tragedy inspired the formation of Lakou Mizik.

The band emerged in the wake of the Haiti quake, bringing together several generations of Haitian musicians of diverse spiritual, cultural and musical backgrounds.  Led by guitarist Steeve Valcourt, the group is a dynamic (and danceable) reflection of the vibrant Caribbean, African, French and American influences that inform Haitian culture.

Touring in support of their debut album Wa Di Yo — released on Charlotte's Cumbancha and produced by Montréal's Chris Velan (Sierra Leone's Refugee All Stars) and Iestyn Polson (David Bowie, Patti Smith, David Gray) — Lakou Mizik perform with Antibalas and locals Barika at the Waterfront Tent in Burlington on Saturday, June 11, as part of the Burlington Discover Jazz Festival. Seven Days recently caught up with Valcourt via email — with some translation and editing from the band's manager, Zach Niles.

SEVEN DAYS: The band formed in the wake of tragedy and its members have all experienced remarkable hardships. And yet you seem to find healing, strength and hope in music. What it is about music that transcends pain and struggle?
STEEVE VALCOURT: You know, Haiti is a country that lives and breathes its culture. We have songs for every part of life:  work, joy, hardship, happiness and death. We always express ourselves through music and rhythm. After the earthquake, when everything was darkness, what you could hear at night above the wailing cries of those who lost loved ones were songs — voices and drums. This is how we express all of our emotions.

I don’t think that music transcends pain and struggle as much as it can give voice to it and make sense of it. Haiti is so often shown as a place only of pain and struggle. But the truth is, we are just humans going through tough times, yes, but also laughing and celebrating, dancing and singing like any people anywhere. Music is our way of connecting these common themes with people who only know one side of our country.

SD:  How can music affect social change? What role can it play?
SV: In Haiti, music has always been a big part of social change. There are songs that have changed the course of our country through their powerful lyrics. Somehow, musicians have always been able to express things that ordinary citizens don’t feel free to express. There’s a protection, maybe, in doing it through song. Whether it’s to lift spirits or to uncover ugly truths, music in Haiti has always been a powerful force that the people in power are forced to respect.

SD:  Chris Velan and Iestyn Polson coproduced your new album. What did each of those producers bring to the project?
SV: I’m so glad you asked this! This is our first album and we were hesitant to work with foreign producers. But we are so very pleased with the result. Chris and Iestyn really became like brothers to us throughout the recording. They were so respectful of our culture while pushing us to make an album we never thought we could make. It was their creative guidance that made us record the album totally live. They understood that our music was really based on music from the streets and, to capture that feeling, we couldn’t just record the normal way.

I have been producing music in Haiti for many years but never took the chance to record a full band live the way that they did. As a producer, I learned so much from them. They really understood that we would lose the energy if we recorded each part separately, one by one. We are so proud of how this album came out, and we owe a great debt to the creative vision that Chris and Iestyn brought to it.
SD: How did you come up with the band’s name?
SV: “Lakou” means a lot of things in Haitian culture. Literally, it means a backyard, where people gather. Spiritually, it is both a holy place in Vodou religion as well as the place where your ancestors are. For us, “Lakou Mizik” really means "music from home." It was with our manager, Zach Niles, that we settled on the name, and it feels like something that all Haitians can feel a part of. And that's the way we see the band.

SD:  Your music blends a variety of styles but remains rooted in Haitian traditions. How do you find a balance between pushing the music forward and honoring the past?
SV: This just comes about naturally for us because of the band members and their individual backgrounds. Some of us are from the Vodou traditions, some from the Christian traditions, some from Rara (street music), some from Troubadou. But there is a youthful element to the band that always pushes the music into new directions. It was the idea from the beginning: honoring the past while driving the culture forward.

Sometimes it feels like people want Haitian music to just stay rooted in the past. But modern Haiti has so many influences; I think our music is just an authentic expression of Haiti today. Our deep pride in our culture doesn’t stop us from evolving and adopting new musical styles.

SD:  What is your hope for the future of Haiti?
SV: Oh, that’s a big question! We have an expression in kreyol [creole] that says "L’espwa fe viv" — Hope gives life. But these days, many people in Haiti have to fight too hard to find hope. Haiti is such a complicated place. We are a proud people and we all want to live up to the great legend of our slave revolution. But we need politicians that can inspire us to that.

My personal hope for Haiti is that we become again the Pearl of the Antilles. That we live up to our potential and find a way to support ourselves instead of relying on foreign powers. For me, personally, and for the band, we hope that our music and our shows inspire people to see and relate to Haiti in a different, more positive way.