A Movie Not to Miss: The Fits to Screen in Burlington | Live Culture

A Movie Not to Miss: The Fits to Screen in Burlington 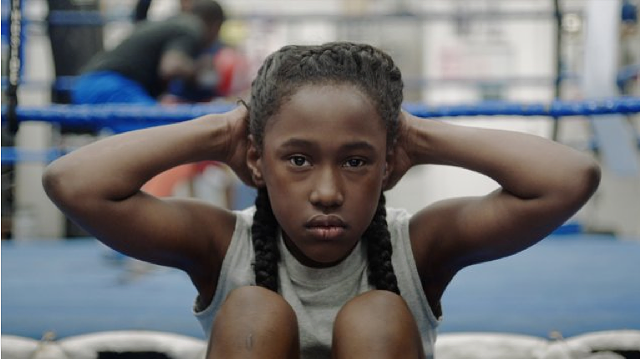 The scene: an urban community center. A young girl dances frenetically, her fists punching the air, her controlled movements channeling the churning emotions of adolescence. Suddenly she's out of control — writhing, seemingly seizing. Or perhaps she just stands quietly transfixed, as if glimpsing something beyond this world.

Variations on this scenario occur throughout The Fits, the directorial debut of Anna Rose Holmer. The offbeat coming-of-age film screened at the Venice International Film Festival and the Sundance Film Festival. This Thursday, you can see it in Vermont as a presentation of the Vermont International Film Foundation and Main Street Landing Performing Arts Center: May 26, 7 p.m., at Main Street Landing Film House in Burlington. $5-8, or free for VTIFF members.

And why should you see it? Because The Fits combines the energy of a dance film with the obliqueness and eerie atmosphere of an art film. I feel safe in saying I've never seen anything quite like it before.


Holmer, who produced the documentary Ballet 422, discovered  Cincinnati's Q-Kidz dance team on YouTube.  "I fell in love with drill and with them as a team simultaneously," she told Blackfilm.com (read more here).

She went to Cincinnati, where she auditioned Q-Kidz members (45 appear in the film) and cast preteen Royalty Hightower as her lead, Toni, who appears in nearly every shot.

When we first meet Toni, she's hanging out at the community center's boxing gym with her older brother, who teaches there. This quiet, composed girl seems at home in the masculine atmosphere —  she's learning to box herself — yet something draws her inexorably toward the room where the Lionesses dance team practices.

The teenage dancers exude an authority and charisma that mesmerize the younger girls. Their locker-room talk of sex and boyfriends is compelling, too. Soon Toni joins her bubbly friend Beezy (Alexis Neblett) on the team. The two girls pierce their own ears and cherish their sequined uniforms.

But something is happening to the older girls: mysterious "fits" that no doctor can explain. Alarmed at first, the Lionesses eventually start welcoming these bizarre episodes  — everyone wants a fit of her own. And Toni has to decide if this is a feminine rite of passage she wants to experience, too.

I went in prepared for a low-key, artistically shot, perhaps even difficult film, thanks to this Indiewire review. And, yes, Holmer does use her camerawork to tantalize and sometimes frustrate the viewer, often keeping the titular fits off-screen. Yet I was surprised to find The Fits almost as mesmerizing as Toni finds the Lionesses.

The film has scant dialogue, and viewers who don't relate to Toni may have trouble with it, because she's a stoic girl who doesn't tell us what she's feeling. For me, though, this wasn't a problem, because both Hightower and the film speak eloquently in another language — movement.

Even when they aren't dancing, these girls are always in motion — fidgeting, balancing on railings, doing pull-ups, treating the community center like their own personal jungle gym. Their restlessness conveys what they don't say, and it feeds into the energy of their dance performance, as well as the more chaotic energy of their fits.

For me, that was The Fits' real subject — how our bodies' ways of moving express our ways of being in the world, and how those patterns change (not always for the better) as we mature. Whatever your take, this film is bound to provoke lively discussion — one more reason to see it in a communal setting. Get a taste from the trailer: