The Hood Museum, Closed for Renovations, Loans Works to Fleming

Vermonters dismayed by the Hood Museum's long-term closure will be happy to know there's an upside to the situation — and not just a bigger, shinier Hood when it reopens in 2019.  Three contemporary American paintings from the Dartmouth College institution's permanent collection have been relocated and are now on view at the University of Vermont's Fleming Museum of Art in Burlington.

The Hood has shut its doors through 2018 in order to add, according to its website, "three object-study rooms, a sweeping public reception space, and a number of stunning new galleries." The  museum is also renovating its current gallery spaces. Much of the collection has been relocated to nearby storage, but 50-odd artworks have been temporarily adopted by other institutions for the mutual benefit of the Hood and museum-goers around New England.

The works on loan at the Fleming are Ivan Albright's "The 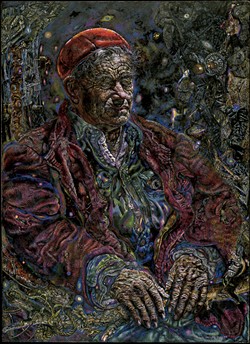 Vermonter (If Life Were Life There Would Be No Death)," Alex Katz's "Supper" and  Georgia O'Keeffe's "Taos Mountain, New Mexico."

"These were so perfect for us, on a number of levels," said Fleming Museum executive director Janie Cohen in a telephone conversation. "They fit so beautifully into the collection the way they’re currently hung."

"The Ivan Albright was selected because of the subject," Cohen explained. Albright (1897-1983) spent the majority of his life in Chicago, but moved to Woodstock, Vt., in 1965. He painted his oil "The Vermonter"  between 1966 and 1977. The portrait depicts his neighbor, Kenneth Harper Atwood, who, as it turns out, was a UVM alumnus.

This was the first work Albright began in his new home.  Because of its subject, it currently hangs in the Fleming's New England Gallery. Cohen noted that "Albright's style was influenced by European painting and his work as a medical draftsman in WWI." So, his style is "so not New England," she said.

In 1997, the Art Institute of Chicago hosted a retrospective of the painter's magical-realist works. Albright was also the father-in-law of former U.S. secretary of state Madeleine Albright. 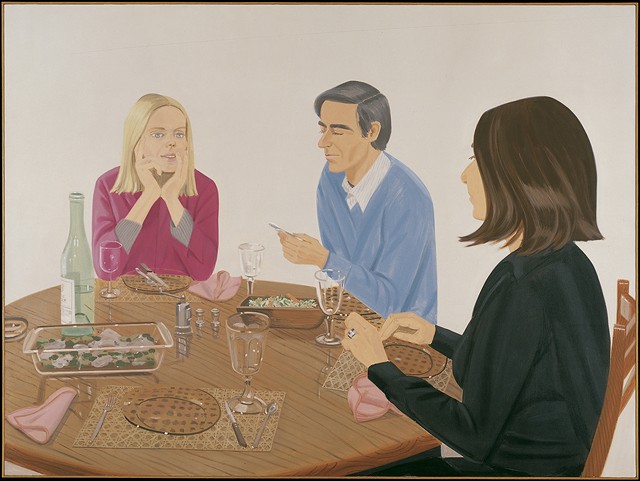 "Supper" by Katz (1927-) is a 1974 acrylic point-of-view painting that uses crisp lines and simple light to show an ordinary scene of friends and family congregated at the dinner table. The figure on the right is Katz's wife, Ada. At approximately five by eight feet, the work is the largest work in the Fleming's European and American Gallery, noted Cohen.

The oil landscape by O'Keeffe (1887-1986), also placed in the European and American Gallery, was painted in 1930, during the early years of the artist's love affair with the American Southwest. "Taos Mountain, New Mexico" is an example of the simplified forms and juicy palette for which O'Keeffe would become famous. 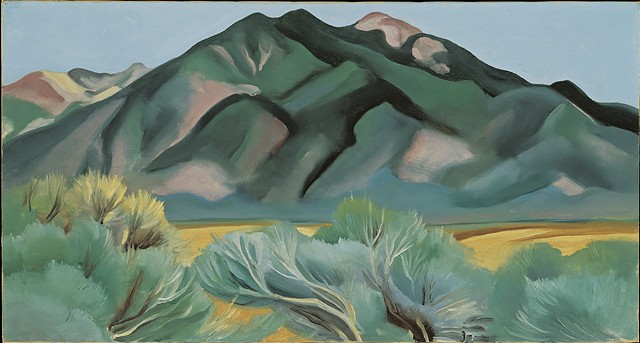 The Fleming is not the only museum to benefit from the Hood's need-induced lending. A fragment of an Egyptian sarcophagus is at the Middlebury College Museum of Art. Regionally, other institutions that have received works include the Currier Museum of Art, the Williams College Museum of Art and the Yale University Art Gallery.