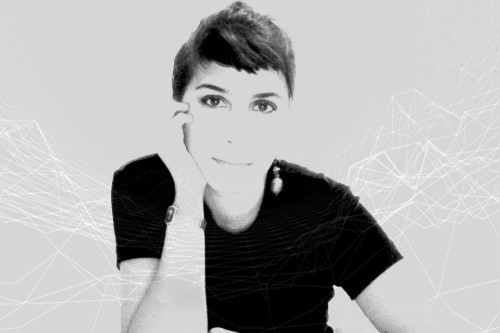 At Champlain College last Thursday, Morehshin Allahyari talked to a room full of mostly white Vermonters about "digital colonialism." It wasn't the center of the conversation, but the uncomfortable topic surfaced multiple times — not surprisingly, given the nature of Allahyari's work.

The Iranian-born artist and activist was the fifth speaker to participate in Generator's BIG Maker series. She was there to discuss her ongoing project "Material Speculation: ISIS,"  which, according to her website, "inspects petropolitical and poetic relationships between 3D printing, plastic, oil, technocapitalism and jihad."

The inspiration for her current project was a shocking video that ISIS released last year. It showed fighters occupying the Mosul Museum in Iraq, toppling statues and demolishing artifacts and claiming the prophet Muhammad had ordered them to do so.  The destruction sparked international outrage. But the act prodded Allahyari to create.

At the time the video was released, the artist was delving into petropolitics ("the strategy of controlling petroleum sales as a way of achieving international political goals," according to Merriam-Webster), and plastics.

"Demand for oil drives the sustainability of ISIS," Allahyari said.  As for plastic, it "claims one-quarter of all the oil extracted from the earth," she continued. "It's embedded in every aspect of our life."

With those topics in minds, the artist  set her sights on creating representations of the museum's lost objects using a 3D printer, which she accessed through an artist-in-residency program at Pier 9 in San Francisco.

"I didn't realize how complicated it was going to be," Allahyari said, referring to the research required to reconstruct the artifacts. Not only did she have to discern which objects were replicas and which were originals in the museum; she had to create a 3D image from just a handful of poor-quality photos.

Allahyari's extensive journey into the origins of each object became a major part of  her project. Inside each of the 12 small statues, cast in a hard, clear resin, she embedded a flash card and memory drive bearing "images, maps, PDF files and videos gathered in the last months on the artifacts and sites that were destroyed," according to her website. 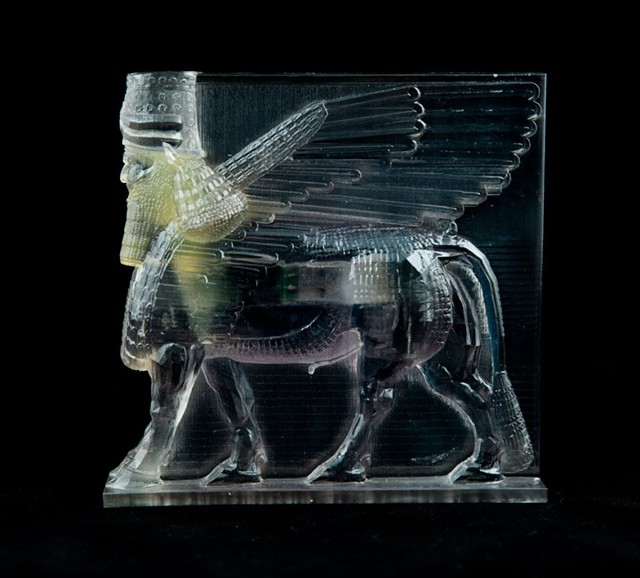 The goal was to provide universal access to the objects and their history, a concept that is deeply important to Allahyari. In February, she worked with Rhizome, an online platform for digital art, through the New Museum in New York City, to distribute files telling the story of one of the (formerly) lost pieces: King Uthal of Hatra, a Roman-era figure from the Mosul Museum.

With one click, anyone can download the files needed to 3D print their own King Uthal. But Allahyari doesn't expect everyone to have a 3D printer, or even to need one, to appreciate the download.

"The more people save these files," she said in Burlington, "the more people who keep them on their hard drives and computers — even if they don't 3D print them — I think that's a way [for this] history to be remembered."

Allahyari hopes to work with other institutions to host the remainder of the artifacts she has represented — as long as they're freely available to the public. She sees more recent attempts to appropriate and recreate sites and artifacts decimated by ISIS as acts of digital colonialism, citing as an example the recent re-creation  and exhibition of Palmyra's Arch of Triumph in London.

"What does it mean to take a site or an artifact from the Middle East [destroyed by ISIS] and rebuild it and position it in London or New York?" Allahyari asked the audience.

Reactions to her lecture were overwhelmingly positive, although, during the Q&A session, one man urged Allahyari to set aside activism and pursue documentation of artifacts before they're destroyed. "There's a real opportunity and a need," he said. "We need to go around and take 3D scans of everything that's museum caliber, because we never know who's going to get hit next."

Allahyari responded that she didn't have a problem with recording artifacts (i.e., taking extensive images of every angle to facilitate 3D printing in the future), but, she said, "if you record, you need to give access." The artist also cautioned the speaker to "step out of this position of  'we,'" which she suggested he might equate with Western society.

"Because if you fail to step out of that, you fail to see the whole history of colonialism. Let's stop making it all about 'we, us.' I think that's the problem," Allahyari said. "And then let's talk about access and this amazing opportunity. We live in a time where we can share things, so let's do that. Let's focus on that, let's talk about that."