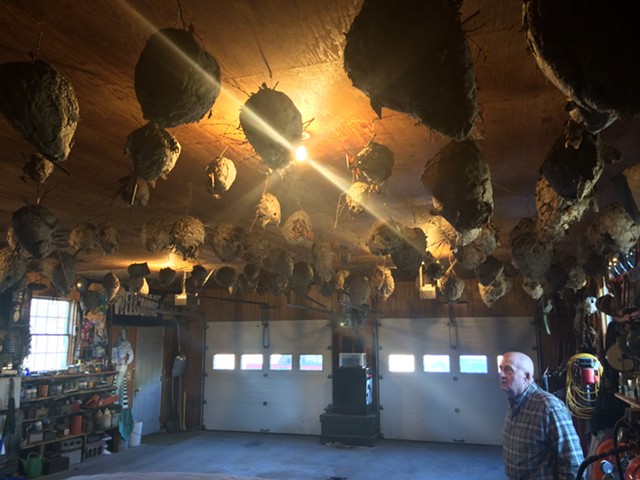 This week, I found myself barreling from Burlington to Tunbridge, wondering if anyone's ever pleaded their way out of a speeding ticket on the merits of being an arts writer with a hot tip and a deadline. My particular tip was the kind with the sort of poetry that only small-town life affords: a Tunbridge native named Baxter Doty who collects hornets' nests. I needed to get to Doty before dark so I could get pictures of the nests in daylight.

Last summer, Tunbridge resident Bill Freese had a conundrum. Hornets had built their nest in a maple tree at the end of his driveway. Freese was "watching it all summer," he said by phone.  Though the buzzing, stinging bugs made him nervous, Freese was still reluctant to destroy their home and hard work. Eventually, after a season of internal debate, fall came, the nest was abandoned, and along came Baxter Doty. Word about Freese's nest had gotten out.  (The Valley News ran a story about his collection, written by Nicola Smith, in 2012.)

I learned about Baxter's very special collection through the good graces of Bill's daughter, my Seven Days colleague Alicia Freese.

Doty had given me directions over the phone — the second house on the left after crossing two cement bridges — and I crunched up to the neat hilltop home at about 5:20 p.m. Doty stuck his head out the door to wave me in, and as we made our way from the kitchen to the garage, I asked him how many nests he had, realizing then it could be five or 50. "A few," he said.

Nearly the entire ceiling of the garage was hung with thoughtfully spaced gray nests. When pressed, Doty estimated there were 75 to 100 of them. "People come right in here," he said, "and they don't see ’em."

At risk of sounding goofy, it's hard to overstate how beautiful the hornets' nests really are. The flaky outsides look like masterfully marbled paper. Each nest is its own variation on a theme, part paper lantern, part architectural daydream, like models of hurricanes or cyclones rendered in pulp. Busted ones remind me, uncannily, of the Death Star.

Many are built around a branch running through the middle. Doty pointed out one given as a gift by a friend in Bethel: a large nest dropping from a stovepipe corner segment, with a second, much smaller nest inside the pipe. "Isn't it wicked?" he asked rhetorically.

Doty, 71, estimated he started his collection 10 or 15 years ago. Though he's now retired, he spent 30 years as a member of the state's road crew, and 18 years before that as a farmer. He's lived in Tunbridge all of his life.

"I got it into my mind, it'd be nice to see what sized ones I could get," he said of his nests. "What I'd like to do is get some really, really big ones."

"I don't get ’em until maybe three, four, good hard frosts," said Doty. "I don't even try and think of finding ’em during the summer, ’cause [the hornets are] still building." Incredulous at the feat of engineering that occurs over just one summer season, he added, "They must work continuously. They must."

Doty's fascination is shared by many contemporary artists: the honeycombed kitsch of Aganetha Dyck, the cartographic and sculptural bee stylings of Ren Ri and the vessels of Tomáš Gabzdil Libertíny all come to mind. Last winter, an LA retrospective of French conceptual artist Pierre Huyghe included the work "Untilled (Liegender Frauenakt)," a nude sculpture whose head was colonized by, and swarming with, bees. And while hornets are not bees, the two certainly share an industrious penchant for building exquisite structures.

Art is cool and all, but sometimes all you really need is a trip to Tunbridge.