On Friday, March 4, Burlington City Arts made a big announcement. Acknowledging the city's growing number of artists and their financial needs, the organization has created a fund to support locally produced works.

It's a new move for BCA, which has been criticized for exhibiting out-of-state contemporary artists at its Church Street gallery. (Though it's noteworthy that half of the artists in current ceramic exhibit "Dysfunction" are based in Vermont.)

For this pilot year,  $35,000 has been allocated for the Burlington City Arts Community Fund. The BCA board raised $15,000, and the City of Burlington contributed $20,000. Both are outside of BCA's annual operating budget. 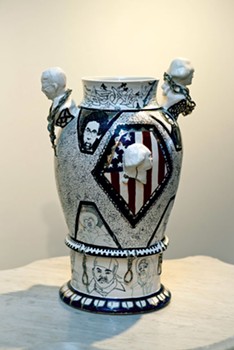 Burlington artists ages 18 and up, as well as "creative professionals" and small arts organizations, can apply for grants of up to $3,000. The panel of yet-to-be-named jurors will be looking for projects that "engage the community and address needs, challenges and priorities through the arts," according to BCA's press release. The funding is open to artists of all disciplines and genres.

Applications are due by April 29. The first round of grant recipients will be announced on May 30.

Artists will have one year to complete their proposed projects, and will be required to either include a public component or display the work publicly.