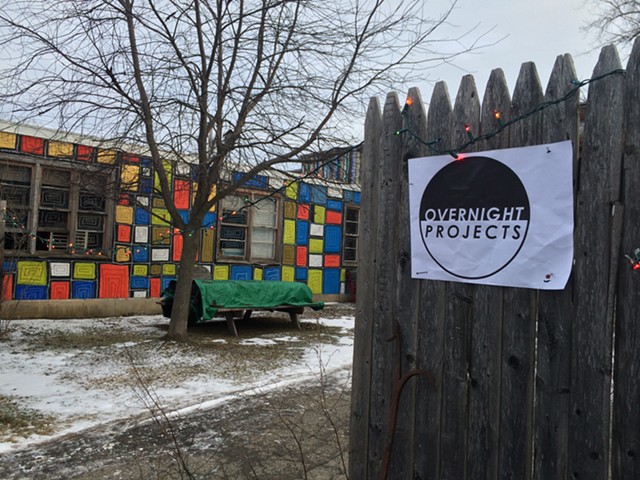 Their three-channel video installation was the result of some four years of collaborating, in which the couple collected specific shape-oriented footage. These include images of Florida water skiers practicing their impressive pyramid formation (triangle); a colony of feral kitties among bright orange rubber balls (circle); and two massive dice tumbling across an anonymous horizon line (square). Brehm described the scenes as a way to "manipulate our surroundings for sculptural purposes."

Each vignette was sporadically projected onto a screen in the corresponding shape, rendering the scenes as cinematic sculpture, sometimes playing simultaneously and sometimes not. A soundtrack by Brooklyn-based Luz Mob accompanied the work, intended to lend a "jam session" feel to the experience. 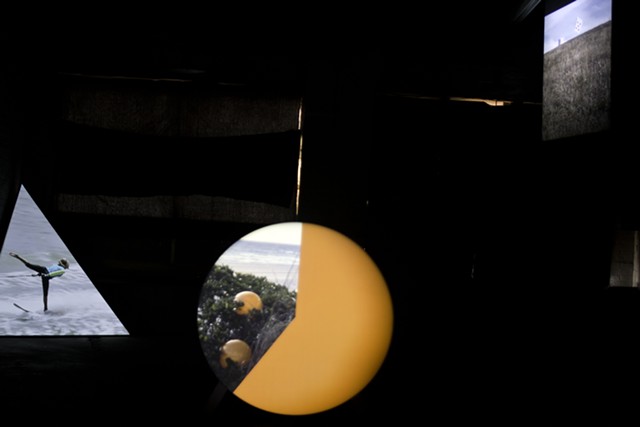 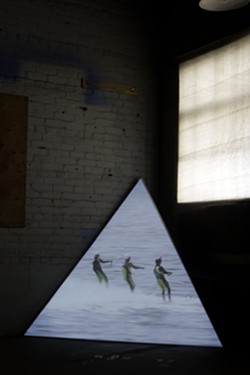 The work Smith presented was more somber, the contemplative poetry to Brehm's irreverent experimentation. In "Tango With Gary," she created an in-situ cinematic experience for passersby, who could glimpse the soundless tango-ing legs of Smith and her dance instructor from the street below. Smith, who has a hearing impairment, told the audience that tango is the only thing, aside from sleeping, that she is able to do with her eyes closed.

Smith also presented "Woodwind With Kite," in which local musician Geoff Kim provided live accompaniment to footage of a kite — wind being the common element between the sound and the soundless visual projected on the wall.

The opportunity to get a feel for Brehm and Smith's individual work provided a poignant, and arguably necessary, component to "Triangle, Circle, Square." The simple premise of the work was given new dimension when considering it not only as a stand-alone offering, but as the nuanced embodiment of two artists and partners finding and producing a creative point of intersection.

Asked if they intend to continue this collaboration, the answer was yes. "Building the collection of landscapes for these geometries is a really interesting way to travel," said Smith.