Devin Wilder knows a thing or two about hearing loss: The 22-year-old, who graduated with a BA in studio art and English from Saint Michael’s College in May, was born unable to hear in her right ear. She had a bone-anchored hearing aid implanted when she was 13, but side effects dissuaded her from using the device.

That’s not the only reason Wilder, a current maker-in-residence at Burlington’s Generator, has used her two-month stint there to develop an interactive installation she calls “Seeing Sound.” In a freak accident at Red Rocks Park last summer, Wilder lost hearing in her left ear, too. “It was a 10-foot jump and a flip, and I landed wrong,” she says. “I came up out of the water and it was just quiet.”

Wilder had her eardrum “patched up” at Massachusetts Eye and Ear Infirmary in Boston, close to her native Beverly, Mass. Afterward, she could hear out of her left ear again. She’s still deaf in the right, but the doctors told her she didn’t have to be; they “introduced me to the new hearing aids, and the technology was unbelievable. I could hear,” Wilder says.

“But when they sit you down to try it on, they give you a disclaimer: Insurance companies don’t give you any support,” she continues. “It’s five grand out of pocket.” 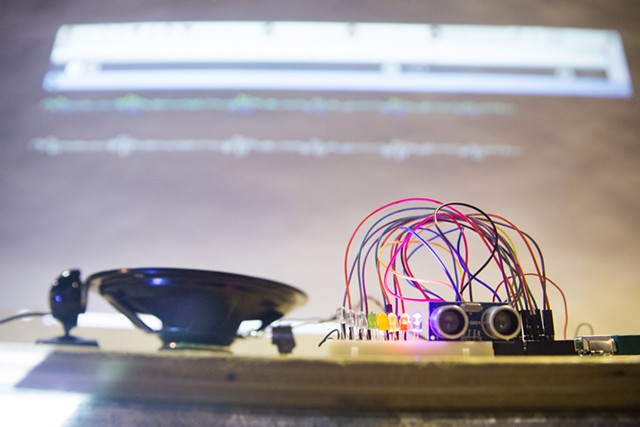 Wilder couldn’t purchase the device for that sum. Frustrated to learn that many people with hearing impairment can’t access the latest technology for lack of funds, she decided to address what she saw as an injustice through her art.
“But after you graduate, you lose all your resources,” says the petite artist, referring to the studios she utilized at St. Mike’s.

Through a chance encounter with a Generator member in July, Wilder was introduced to that maker space filled with tech tools and creative minds. “It was love at first sight,” she says. On the heels of her undergraduate work in light design, and with a newfound desire to explore sound, Wilder applied for the residency program. It provides recipients with a $1,000 stipend and access to Generator’s facility, equipment and community to help advance their work over two months.

“You get introduced to so many ideas here,” Wilder says. With the help of those connections, her project became reality. “Seeing Sound” involves multiple electronic devices built and coded from scratch. A tiny, hand-built theremin with a six-foot range detects motion and translates it into sound. The instrument is hooked to electronic devices that Wilder has coded to display visualizations of the sound waves emitted. A projector displays the image on the wall: a multicolored, two-dimensional waveform that swoops and curves in relation to the sounds from the theremin.

“Sound has different kinds of waves. It could be a sine wave, or, if it’s digitally produced, it could be a square wave,” Wilder explains. “So a waveform visualizer shows them no matter what kind they are.

“I had no knowledge of writing code before Generator,” Wilder continues. “It’s all open-source learning.” She’s referring to an educational model that relies heavily on students developing and exploring ideas with the aid of the internet and a mentor figure.

For Wilder, that mentor was Leif Hunneman, the wild mind behind last fall’s “Simulacrum Project” at 339 Pine. “[Leif’s] been doing this his whole life,” she says. “Every time I had a problem, I’d find him. He’d spit out five answers and give me all the parts I needed.”

With her residency about to end, Wilder is unveiling her installation to the public. “Seeing Sound” will remain in Generator’s entry hall through March. As people walk by, their movements will be picked up by the theremin and projected as visible sound waves on the wall.

“Seeing Sound” marks Wilder’s first step in her nascent Right to Sound Project, which addresses those limited insurance opportunities for the hearing impaired. While she doesn’t yet have other exhibits or events lined up, the artist says her long-term goal is to convey her message as widely as she can. “However my work ends up spreading,” Wilder says, “the most important thing is that it does.”

Meantime, she’s excited about the possibilities of sound installation and the skills she picked up during her residency. “With tiny computers and microcontrollers, we can look at sound in a way we weren’t able to before,” Wilder says. “We’ve changed the way we experience it.”