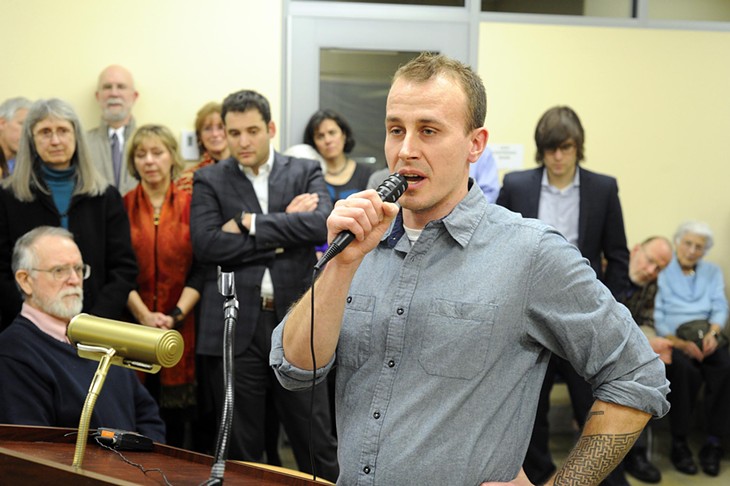 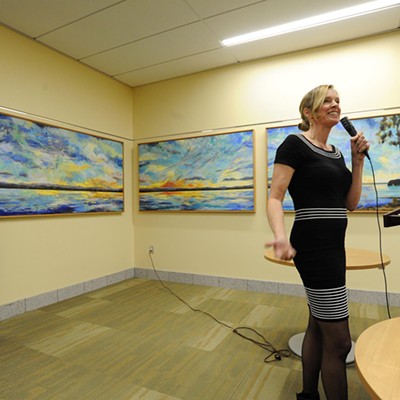 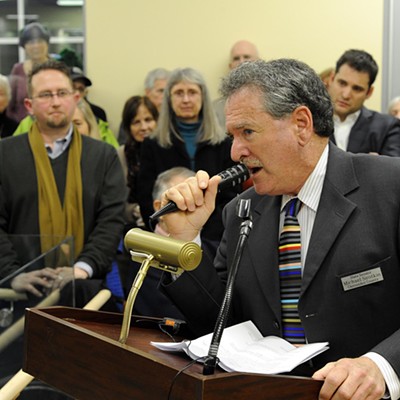 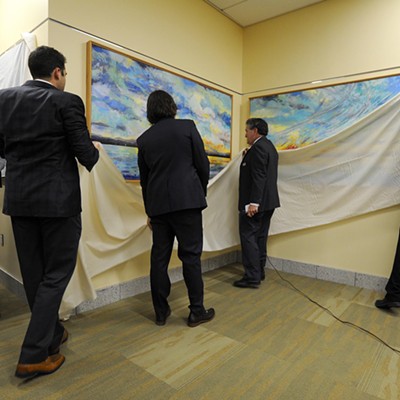 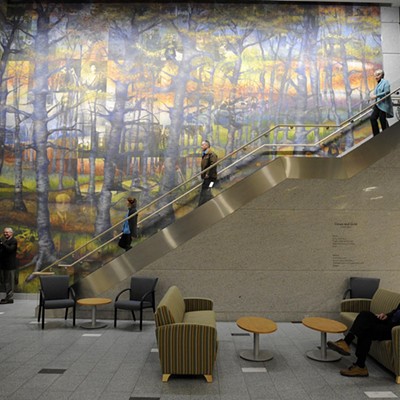 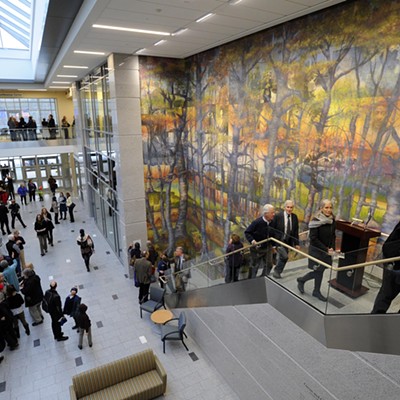 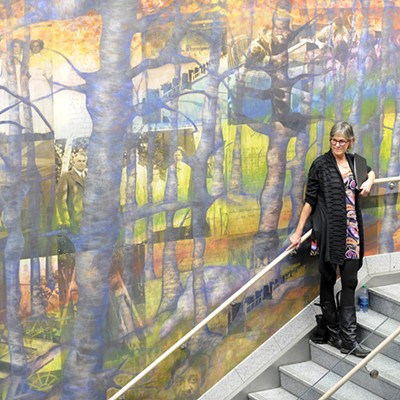 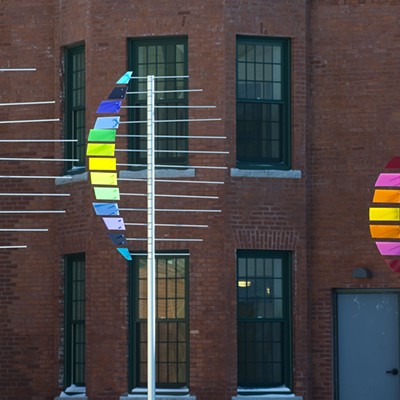 New Art Unveiled for Dedication of Sally Fox Conference Center
Click to View 9 slides
The new State Office Complex in Waterbury was packed to the brim Friday night for the dedication of the Sally Fox Conference Center and the unveiling of three new artworks. Katharine Montstream's quadtych was commissioned by the late senator's husband, Sen. Michael Sirotkin (D-Chittenden). Sarah-Lee Terrat's massive mural and Gordon Auchincloss' outdoor sculpture were commissioned by the Vermont Arts Council through the Art in State Buildings program.
The building, which opened its doors in mid-December, houses employees of the Agency of Human Services. It's fitting that the conference center bears Fox's name: She is remembered by many for her dedication to those in need, whether they were struggling with mental illness, poverty, disability or incarceration.

Alex Aldrich, executive director of the Vermont Arts Council, opened the evening by greeting guests from a podium stationed on the stairway in front of Terrat's mural. He briefly pumped the Art in State Buildings program, mentioning that to date it has placed art in 31 state buildings in 12 counties.

Next up, Terrat took the podium. Her mural spoke to the history of the site, which held a psychiatric hospital for more than a century. Enlarged photographs of patients, nurses and hospital documents were overlaid by a translucent birch forest inspired by a poem called "Green and Gold." The poem was written by a patient of the hospital, Jean Killary.

"It's short but it's beautiful," Terrat said after reading it aloud, emphasizing her hope that the mural will give new life to the public's collective memory of the hospital. "If you're working in this building," she said, looking out into the crowd, "talk to this mural. It's going to talk back to you. [It's] a chance to give a different legacy, a positive one, to this site."

Auchincloss, whose outdoor sculpture "Three Winds" was viewable in a slideshow, took the podium next. (The courtyard where the sculpture was installed was closed to the public.) His glass-like acrylic and stainless steel sculpture was an effort to "put a little bit of sunshine on the people who might be coming to this building for unhappy reasons," the artist said.

The dedication of the new Sally Fox Conference Center closed out the program. Standing in the corner in front of Montstream's four, sheet-clad paintings, Sen. Sirotkin elicited laughter from the audience with a story of how his ever-humble wife once turned to him in the car and said, "You know, I want a building named after me."

"Sally belongs here," Sirotkin said, referencing his wifer's dedication to helping those in need. "She's truly a part of this building's history."

After comments from Fox's friend and former speaker of the House Michael Obuchowski, who now serves as the commissioner of the Department of Buildings and General services, artist Jeremy Lee MacKenzie took the microphone. "Today I'm an artist and a Vermont filmmaker," MacKenzie said, "but that wasn't always the case."

MacKenzie, who served three prison sentences over eight years, met Fox through the City of Burlington's offender re-entry program. "During my years of adolescent identity formation, the influential people in my life were heroin traffickers. [Sally] ended up becoming one of the first people to provide a counterbalance to the things I'd been exposed to," MacKenzie said. Later, via email, MacKenzie added that Fox made the re-entry program successful because she "treated people like humans," not like offenders. In fact, he said, Fox preferred to call it the "re-entry program," and not the "offender re-entry program" for that very reason.

For those at the dedication ceremony who didn't know Fox personally, MacKenzie's words provided a moving portrait of the late senator. He cited her belief in his potential, how she encouraged him to pursue his education (he's now a student at Champlain College), and how she spoke on his behalf at his final sentencing, her voice hoarse from a recent surgery related to her lung cancer.

"She came to my aid when she herself was dying," MacKenzie said, ending his tribute by describing the last time he saw Fox. It was the winter of 2012. He was in the Community High School of Vermont at the Northwest State Correctional Facility in Swanton, where he worked as the prison librarian during his incarceration. Fox was on a tour of the facility, and when she heard he was in the library, she broke away from the group to go see him.

"Sally came walking in, and, to my surprise, wrapped me up in a great big hug." MacKenzie explained that, in prison, you're not allowed to make physical contact with visitors. "Sally was the first person to hug me in three years. I'll remember that hug for the rest of my life. It was the last time I saw her alive."

With that, Montstream's paintings were released from their shroud, and the public had its first look at the panoramic landscape spread up among the four panels. The scene depicted Fox's view from her home on Shelburne Bay, Montstream said, pointing out various local landmarks on each panel. One painting, she noted, held a secret message for Fox.

During the painting process, Montstream said, she struggled with the sunset. "I wanted it to be special for Sally. For two months I was looking for the sky," she said. Finally, she decided to jump into the painting with a "don't think, just paint" attitude. What resulted was "the sunset I had hoped to have seen. Bold, evocative, sweeping up. It reminded me of her transition from this place to the next," Montstream said.