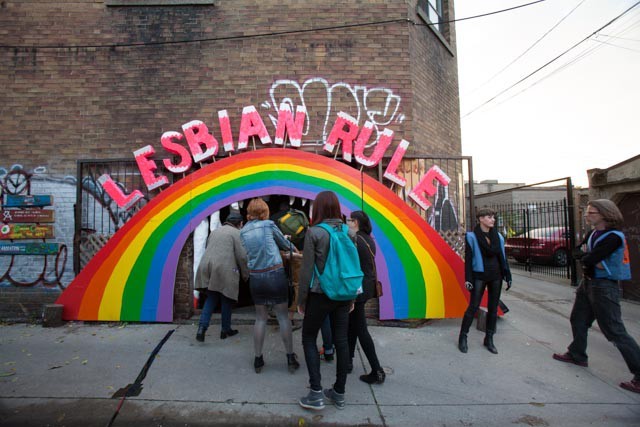 On Saturday night, the Vermont College of Fine Arts in Montpelier kicked off its annual winter residency program with the talk "Killjoy's Konundrum: The Problematics of Queer Feminist Cultural Production," presented by artist Allyson Mitchell. Mitchell, who is on campus this week to meet with students and faculty, used the opportunity to introduce herself and her work, including her most recent project, the "lesbian feminist haunted house" Killjoy's Kastle.

Vermont artist Mark Lorah introduced Mitchell, somewhat quizzical about her self-identification as a "maximalist" artist. Mitchell assured him that she doesn't occupy an anti-minimalist position in the art historical sense, but that she aims for her practice to be "extraordinarily inclusive." She went on to explain in her PowerPoint pre-show, slides filled with cat pictures. "Like all wannabe witches," she said, "I try to bring my familiars into spaces that feel new."

Mitchell dedicated her talk to the artist Jesse Harrod, with whom she recently worked, and who is currently included in "Queer Threads: Crafting Community and Identity" at Maryland Institute College of Art. She asked for a show of hands in answer to the questions: How many people here understand their art as rooted in activism? How many people have at least one professional artist in their family? How many people here wish to extend their cultural community? How many of you are scared of theory?

After this round of questions, Mitchell homed in on a question common among artists of all stripes: Is my art any good, or does it suck? For the next 45 minutes, she offered her own roundabout approach to this central concern by way of an exciting and often funny trip through four of her own projects: "Hungry Purse," "Ladies Sasquatch," "A Girl's Journey to the Well of Forbidden Knowledge" and "Killjoy's Kastle." Mitchell referenced Depression: A Public Feeling by Ann Cvetkovich (which features "Hungry Purse" on its cover and discusses Mitchell's work), noting that author's assertion that certain practices can simultaneously be "kinda hegemonic and kinda subversive." For Mitchell, then, "good" is related to a self-aware struggle with this paradox.

Mitchell spent the most time speaking about "Killjoy's Kastle," which most recently enjoyed a brief tenure last October in Los Angeles. "We weren't open on Halloween," she said, "’cause we're killjoys." The immersive, over-the-top installation/experience was ranked as one of LA's top-10 art shows in 2015 by arts blog Hyperallergic. The haunted house's first iteration was in Toronto in 2013; it appeared in London in 2014.

So what's a lesbian feminist haunted house, anyway? It's a lot of things. Mitchell said her initial interest in building "Killjoy's Kastle" came from her experiences of censorship with other works — namely the "Ladies Sasquatch." She also was driven by the observation that much of society's presentation as liberal, democratic and open is a "cultural lie," even within progressive, arts-oriented museum spaces. Mitchell said that to present her work as both lesbian and feminist was especially threatening, and she started asking, "Who would be scared inside a lesbian feminist haunted house?"

Inspired by evangelical Christian haunted houses, and in particular the documentary Hell House, Mitchell set to work hosting feedback sessions with activists, artists and academics to get a sense of what a lesbian feminist haunted house could and should include. The first Toronto house employed a (paid) team of 30 artists and 25 performers working together.

After receiving a "queer glitter anointment" outside, small groups of guests were led through by "demented women's study professor" tour guides, passing signs with warnings including "paradigm shift ahead" and "beware sinking pit of identity politics." Other cast members included "lesbian zombie folksingers," "paranormal consciousness raisers," "polyamorous vampiric grannies," a dance floor of "riot ghouls," and even a "multi-faced lesbian internet troll waiting to shame you."

At the end of the full experience (which includes many, many more facets than elucidated here), guests were invited to spend some time with "real-life feminist killjoys" — volunteer academics and artists — to process their response. "This is where the feminist method is different from evangelicals," said Mitchell. "You're not asked to accept an ideology."

Mitchell noted that, overall, "Killjoy's Kastle" was "an experiment to elicit affect from an audience." She certainly did that, while also implementing structures of site-specificity, inclusion and accessibility. Beyond that, however, Mitchell said, "For real, it's hard to know your work's any good or if it sucks."

Regardless, a healthy dose of humor doesn't seem to hurt.

As part of VCFA's MFA in Visual Arts winter program, two free public lectures will be offered by artists Christopher DeLaurenti and Skawennati on Thursday, January 28.