Today at New York City's Metropolitan Pavilion, so-called outsider art takes center stage as the doors open for the 24th annual Outsider Art Fair. Among the ranks is Vermont artist, psychiatrist and collector Peter Thomashow, whose collage and assemblage constructions reflect preoccupations with the unseen, as well as science and its historical trajectories. "Magic is his motivator," claims Marion Harris gallery, which represents Thomashow at the fair.

Thomashow's interest in expressing invisible worlds is one shared by many within the young canon of outsider art, a field that is (sometimes divisively) difficult to define. Its former or alternate descriptors include art brut (raw art), naïve, visionary, self-taught, primitive and intuitive. Indeed, the specificity and singularity of certain artists' renditions of hidden universes is what in many ways has defined the field. Henry Darger, a reclusive janitor, even named his alternate reality "the Realms of the Unreal."

"I'm not even sure what the definition of 'outsider art' is anymore," Thomashow commented in a telephone conversation with Seven Days. He continued, "It's an interesting component of art because it's [based in] bursts of creativity, not coming from a school or studied place, rather from the heart. Not that they're mutually exclusive."

Writing for art blog Hyperallergic, Edward M. Gómez claims of this year's event, which is Thomashow's second, "never before has the scope of what might qualify as — or, more precisely, of what is being called — outsider art seemed so diverse or vast." Thomashow keeps it simple, however, maintaining that the modern definition centers on a lack of formal artistic training, as well as, perhaps, a removed stance towards the broader art world. 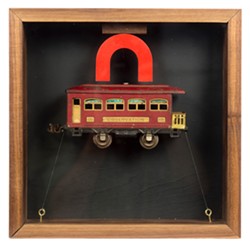 For his part, Thomashow will exhibit collages from "Professor Wolfson's Notebooks," a larger series named for the artist's greatgrandfather, and based on his inventions as well as his anatomical and botanical studies.

Also on view will be a collection of assemblages built with collected material. Thomas how noted that " a lot of them have to do with electricity and magnetism and magic." In "Observation," an early 1900s observation train car is suspended by way of an overhead U-magnet, as if threatening to pull free of the wires keeping it in place.

"Biological Diversity" is a collection of small bottles, each containing a brightly hued piece of marbled paper from the 1800s. "Arcade" entangles a vintage target object in a messy mass of wires salvaged from a defunct pinball machine.

"It's an amazing fair," said Thomashow. Years ago at the fair, he befriended the legendary outsider artist Howard Finster, known for his "visionary environment" Paradise Gardens in Summerville, Ga., as well as his unique painting style that R.E.M. and Talking Heads selected for album art. The friendship stuck with him. "For me to be in a show of the caliber that would exhibit artists like [Finster] ," said Thomashow, "I feel very proud."

The Outsider Art Fair runs through January 24 at the Metropolitan Pavilion in New York City.