What I'm Watching: The Battle of San Pietro | Live Culture

What I'm Watching: The Battle of San Pietro 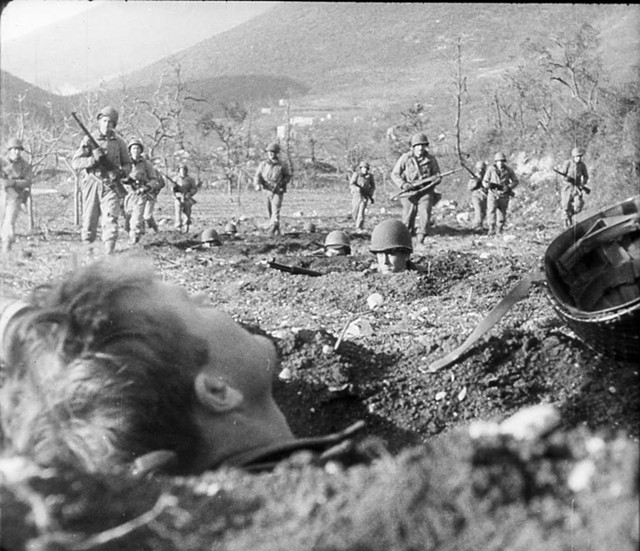 In a documentary history class that I took in graduate school, my professor informed us that World War II, inasmuch as it can be considered a single historical entity, is the most-filmed event in world history. He asked us for our guesses for No. 2, and I recall that I got the answer correct: the National Football League, the footage of whose games must surely, by now, be more voluminous than that of WWII. After all, WWII is over, but the NFL marches ever onward.

Regardless of the answers to such trivia questions as this one, filmmakers employed by both the Axis and the Allies shot and developed an incredible amount of footage of the Second World War. Many Western viewers have a general familiarity with such Allies-produced propaganda films as Frank Capra’s Why We Fight series, and many have seen the flag-waving trailers that encouraged viewers to buy war bonds. (One of the better-known such shorts — as well as one of the most controversial; watch it after the jump and you’ll see why — features a crooning, patriotic Bugs Bunny.)

These films are historically interesting, but to me, the naïveté of their politics renders them less compelling.

Less familiar to most American audiences are the short propaganda films produced by the Axis powers. Even today, English-subtitled versions of Japanese wartime propaganda films are fairly hard to find, and my cursory search turned up next to nothing. I have seen a few of these, in old 16mm prints, and recall that, above all, they were especially vicious, much more so than their American counterparts.

More familiar, and more accessible, are the films in the German Die Deutsche Wochenschau series. It’s fascinating to watch the films in this series and compare their methodologies to those of American propaganda films. It can be pretty eerie to see how similar they are to the wartime newsreels produced by Hollywood studios. (Some of these films are available on YouTube and other such platforms; to access the films in the official Wochenschau archive, one must log in, but can do so as a “guest” after entering minimal information.)

Many of the Axis films, too, may be characterized as single-minded, even obvious, in their politics. I’m more drawn to ambiguous, complex texts, which is why the WWII documentary to which I return most often is John Huston’s The Battle of San Pietro, released to general audiences in 1945. It’s a bleak, harrowing film that is steeped in bitter ironies — and a completely fascinating one. See for yourself: As a production of the United States government, The Battle of San Pietro belongs to the public domain, so the film has been released as part of numerous anthologies. Archive.org’s version, below, is full and complete.
The first thing you’ll see in The Battle of San Pietro is the disclaimer delivered by shifty-looking General Mark Clark. He informs us, before we even know what we’re about to see, that the troops who fought in this battle were necessarily undersupported and overtaxed, and that the losses suffered by American troops were, proportionally, “not excessive.” It’s a puzzling opening, but its meaning and purpose become clear after one watches the body of the film proper. Clark’s statement was meant to soften the blow of the documentary, which is one of the most visceral of all cinematic illustrations of the aphorism “War is hell.”

Clark’s awkward intro was tacked onto the film by the War Department once its high sheriffs had seen the film made by Huston and his crew. Though produced by the U.S. government and intended to rally both troops and home front, The Battle of San Pietro is undeniably an antiwar film.

The story concerns the long and difficult Allied effort to capture the tiny but strategically important town of San Pietro from the occupying Nazi army. Huston’s camera lingers on such images as Allied trucks spinning their tires uselessly in foot-deep mud, mortars landing amid U.S. troops as they struggle to stay on their feet and, most chillingly, dead soldiers: half buried in muck, limbs cracked and disjointed by explosives, loaded unceremoniously into stark white body bags. More harrowing still, some of the dead soldiers are recognizable from shots earlier in the film, in which these men are shown joking around with their comrades. 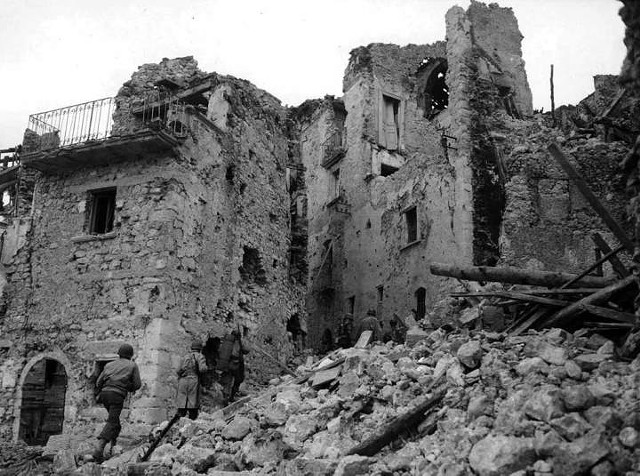 The ironic tone of The Battle of San Pietro comes in large part from its sardonic voiceover, spoken by Huston himself with those great, gravelly pipes. Especially at the beginning, Huston’s dry voiceover turns the film into a kind of mock-travelogue — as if anyone would want to visit an impoverished, bombed-to-hell Italian village. Over a shot of a church whose roof has been destroyed by mortars, Huston says, “Note interesting treatment of chancel.” Over shots of scorched fruit trees, he extols the village’s productive orchards. The voiceover’s tone of bitter irony pervades the duration of the film.

For much of the movie, Huston details, with extraordinary precision, the hour-to-hour efforts of the U.S. Army to surmount the hills that will allow them to overtake the occupying German forces. The Nazis, ensconced at the top of the hills that overlook the Liri Valley, have the strategic advantage, and the advance of the Allies is plodding and grueling. At one point, the voiceover informs us that the soldiers have been making small progress at great cost: For each yard they advance, they lose one soldier. It’s a staggering, sobering statistic. Though the Allies did eventually win this battle and take the town, it was at a huge cost: a great many dead and wounded, and the near-total destruction of San Pietro itself. 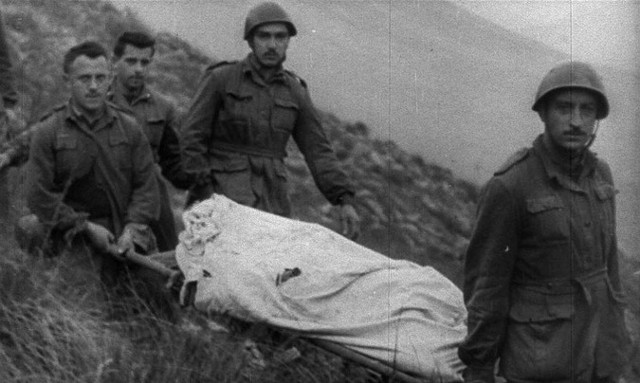 The ironic tone of The Battle of San Pietro is precisely what makes the film so compelling. But the real irony is that it was released at all. No one who sees this film could make the case that it paints the Allies’ Liri Valley operations as anything other than grim and tragic, if nominally successful. Indeed, the film ends by noting that, yes, the Allies took this hill, but that just means the Nazis have retreated to the next hill back, which will become the Allies’ next objective. The message is that this battle and this war are endless.

The U.S. military was under no obligation to release the film to general audiences, yet release it they did. Perhaps military brass saw its grim, ironic realism as a potentially useful tool in “telling it like it is”; perhaps the film was far enough along in the production pipeline that the decision not to release it would have represented a wasted military expenditure.

This is a researchable question to which I don’t know the answer, but I’m glad, in any case, that the film was made and released. It brings a much-needed, and still relevant, ironic complexity to its depiction of World War II, which has, for too long, been regarded as morally unambiguous. As usual, especially with events as enormous and multifarious as those of a global war, the truth is stranger and more varied than most “official records” would have it.