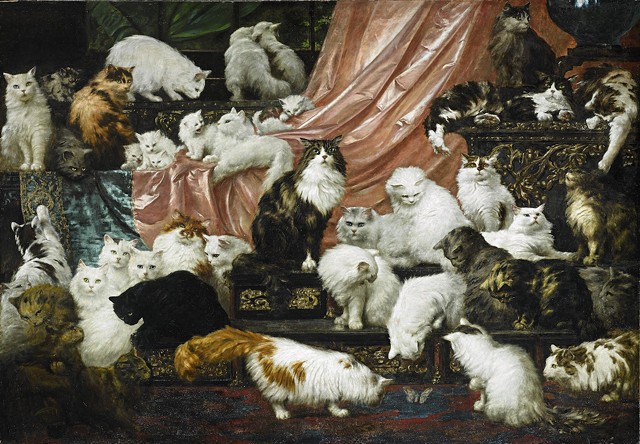 One of the first images displayed in Ola Wlusek's lecture "The Burden of (Art) History?" was a picture of her cat. This Wednesday evening, the second of Burlington City Arts' visiting critics held court in BCA's second floor gallery space, surrounded by Sabra Field prints tacked to the walls, and spoke articulately about her myriad curatorial projects. All of them have involved artists who in some fashion address history as a construct meant to be tampered with.

Wlusek, an independent curator based in southern Ontario, promised that her cat picture was related to her talk, and followed it with a slide of an 1893 oil painting by Carl Kahler. She learned through the arts blog Hyperallergic that the painting, titled "My Wife's Lovers," was sold at auction by 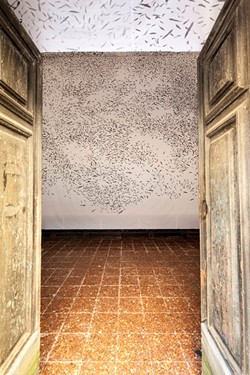 Sotheby's for $826,000. Wlusek quoted the Sotheby's description, which reveals that, while approximately 3,000 people died in the San Francisco Earthquake of 1906, this painting survived.

Her first reaction, Wlusek noted, was incredulity. "I thought, would Sotheby's lie?" she said, laughing.

The crux, for her, was twofold. First, Wlusek suggested, the value placed on Kahler's painting might mean that, in terms of visual culture, society has not evolved very much in recent centuries.

"As a culture of sharing, we are quite transparent in what amuses us," she said, following with the questions, "How do we represent and buy into excess?" and "What do historical paintings reveal about our current selves?" 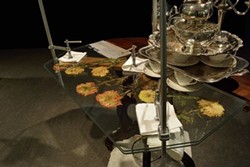 Second, Wlusek hinted at the absurdity that a cat painting commissioned by a millionaire would be a valued artifact today, in the context of a devastating and deadly natural disaster. "Three thousand people died, but who cares? It poses so many interesting social questions."

Wlusek went on to discuss five artists with whom she has collaborated as curator: Jon Sasaki, Howie Tsui, Jinny Yu, Basil AlZeri and Remi Theriault. While in Vermont, Wlusek will visit four artists for studio visits to view and discuss their work from a curatorial perspective.

The third and last of the visiting critics in this series will be Montréal-based art critic and curator Anaïs Castro, April dates TBA.