A Mural Not Long for This World Pops Up in Burlington 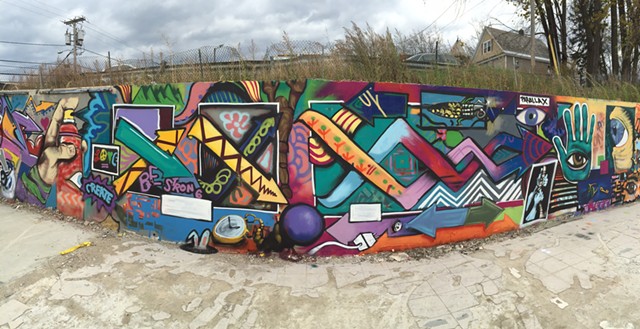 On an unusually warm and sunny November day, the biting fumes of spray paint drifted out of the fenced-in corner lot at Maple and St. Paul streets in downtown Burlington. A horde of college students armed to the teeth with aerosol cans roamed the concrete wall against the property's northern edge. The building once here, the former Eagles Club, was razed earlier this year, and the lot awaits new student housing for Champlain College.

Meantime, the single retaining wall remains, and on this day students were adorning it with colorful, larger-than-life caterpillars, disembodied eyes and hands, floating corn cobs and swirling arrows.

Champlain College professor David Mills emerged from behind the chain-link fence, camera in hand, to greet a curious reporter. The students were participating in the class "Aesthetic Expressions," a core requirement for sophomores, he explained.

Mills said the objective was to get students to think about "the nature and value of art."

He couldn't have chosen a better "lens," as Mills put it, than street art. The genre inherently challenges and engages viewers simply by being in their line of sight, whether they want it or not.

While some public works, such as Mary Lacy's hummingbird on brick wall at the corner of St. Paul and College streets, are met with wide approval, others become immediately controversial. Just this summer, the back wall of the Downtown Mobil went through an aesthetic upheaval when Center Street businesses protested New York artist Mitchell Schorr's "Da Race." The mural pitched what looked like overgrown matchbox cars against an unwieldy ice cream truck.

Within a month, that mural was replaced with another, the collaborative — and more abstract — project of Revolution Kitchen chef Jeff Hodgdon and members of Anthill Collective.

Back on Maple Street, Mills not only wanted his students to get a taste for creating public art but to meet some of the folks who do it. So he invited the core members of Anthill Collective — Scottie Raymond, Brian Clark and Harrison Holmes — to speak to his class about the nature of street art, and to share their thoughts on legal and illegal art, public and private space, and how the genre differs from other art forms.

The artists then collaborated with students on a design, using Nick Sousanis' graphic text Unflattening as a source of imagery and inspiration. The book, originally conceived as Sousanis' dissertation for a doctorate in education from Columbia University, makes an argument for visual imagery as a means of conveying information that can't be put into words.

"[Unflattening is] all about the importance of breaking out of habits of seeing and habits of being, actually looking up and seeing the world with fresh eyes," Mills said. And what better way to see the world differently than by changing the world you see?

At the vacant lot, the students were unfazed by the fact that their project would eventually be obliterated, the professor said. "Street art is by its very nature ephemeral," he went on. "It's a big part of what we talked about. It gets painted over, or the authorities blast it off the wall. In that way, it's very different from traditional art forms that are collected in museums, held as financial investments or displayed on a permanent basis.

"Street artists know their art is going to disappear," Mills concluded. "The students embraced that, even painting over each other's art. But they also know they had a hand in making something valuable while it was there."