This weekend, I watched a movie that was so hopelessly square, so tone-deaf, so inconsequential that it’s barely conceivable that it was released by a major Hollywood studio.

Granted, Won Ton Ton: The Dog Who Saved Hollywood came out in 1976, at a moment when Paramount Pictures was far more willing to take chances than any big studio would be today, but that doesn’t excuse a film that is just barely coherent and was directed with the minimum of competence. For that, though, Won Ton Ton is a somewhat intriguing film, as are most of the others by its director, Michael Winner, who was probably one of the most consistently weird of all mainstream film directors.

It’s probably neither fair nor relevant for me to beat up on a 40-year-old movie, but, hey, the mandate of this column is for me to write about what I’m watching, and what I recently watched was a big old pile of cinematic dog doo-doo.

Won Ton Ton: The Dog Who Saved Hollywood takes place in the 1920s in the milieu of the Grand Old Days of the Hollywood studios. The story concerns a German shepherd who (that?), for no specified reason, possesses particularly high intelligence. The dog takes a shine to Estie (Madeline Kahn), an aspiring actress. Bruce Dern plays Grayson Potchuck (one of many bizarre, ostensibly whimsical character names in the film), a tour bus driver who aspires to direct films.

He eventually joins forces with Estie and studio chief J.J. Fromberg (Art Carney), and they all produce a series of films starring Won Ton Ton — a name, by the way, that makes a putative “ethnic” “pun” on “Rin Tin Tin,” or so I gather. From that point forward, the film simply follows a series of causeless ups and downs in the film career of Won Ton Ton. Eventually, it all turns out all right, but then, doesn’t it always? The film’s most notable feature is being crammed with cameos by actors whose stars had faded. This is one of the few times when I’ll use the phrase “it’s a veritable who’s who,” because this film is a veritable who’s who of faded Hollywood glory. Indeed, its chief (perhaps only) pleasure is spotting aged actors who, by 1976, inevitably looked sort of similar but mostly different to the way they'd looked at the time of their renown.

Henny Youngman is in here, as are Dorothy Lamour, Aldo Ray, Broderick Crawford, Andy Devine, Mike Mazurki, Joan Blondell, a couple of the Ritz Brothers and even Zsa Zsa Gabor. The abundance of cameos would actually be distracting, were the viewer not apt to welcome any distraction from this film’s stupid, poorly told story.

This is a film that especially suffers from being viewed in the present day. It brims with casually delivered jokes about rape and the inferiority of nonwhite ethnicities. Beyond the potential offense it may cause, the film is very sloppily made. Unnecessary shots clog up scenes; cameras move when they needn’t; compositions are unbalanced and artless.

More crucially, the film’s narrative structure is highly unclear, with significant story events occurring for no specific reasons. It’s “loosey goosey” filmmaking, as if the filmmakers were drunk, asleep at the helm or simply uninterested in creating a competent work. With the exception of such talentless hacks as Kevin Smith, who couldn’t care less about either the narrative coherence or the visual appearance of his work, this “whatever” ethos runs counter to that of modern Hollywood, which is, generally speaking, obsessed with visual detail and complex-but-coherent narrative arcs. Won Ton Ton feels very stodgy. 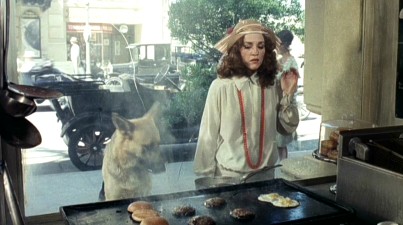 Very little about this film is explicable to me. Why would a comedian as gifted as Kahn take one of the lead roles in this painfully unfunny film? Why would Bruce Dern, who just a few years earlier was making oddball exploitation and acidhead films, take the other lead role? I mean, yes, I know, actors need to make a living, but neither role befits the actor. (Perhaps this is more a question about these performers’ abilities to hire worthy agents.)

More fundamentally, why did some Paramount executive think the studio could make a buck on scattershot nostalgia for, of all things, the Rin Tin Tin series? The original series of these popular films ran from 1922 to 1931; “Rin Tin Tin Jr.” made another dozen or so films from 1932 to 1939; and poor old Rin Tin Tin III made a single outing, 1947’s The Return of Rin Tin Tin.

That return was not to last long. By the mid-1970s, the name of what was once the most famous of all animal actors didn't possess much cultural currency. Viewers who’d enjoyed the original run of Rin Tin Tin films in the 1920s were, by the time of Won Ton Ton’s release, likely to be in their sixties. A prime age, I suppose, for nostalgia about the films of one’s youth, but such a gesture seems a highly unnecessary and even retrograde one for Paramount.

Film is a mass medium, and studios need to cater to as wide an audience as possible to maximize profits. Yet this film appears to have been targeted at a very narrow band of viewers. What’s more, it was released in the same general moment that saw the release of some of the most complex and artistically challenging of all Hollywood films: the Godfather films, Taxi Driver, The Parallax View, Nashville, Chinatown, The Conversation, Carrie, Days of Heaven … and those are just off the top of my head.

The 1970s was a remarkable era for Hollywood, and the films I’ve just listed (duly) get most of the attention. But it’s useful to remember that all studios release all kinds of films in all eras, the better to hedge their bets. Won Ton Ton is one of the little-remembered, undistinguished films that occupied less prestigious slots in a studio’s slate than did the works of Francis Ford Coppola and Robert Altman. Just as there are forgettable movies now, there were forgettable movies then.

The central problem with Won Ton Ton: The Dog Who Saved Hollywood, as I opined to my viewing companions, is that it’s ostensibly making fun of ye olde tyme movies for being quaint and old-fashioned. Yet Won Ton Ton itself is incredibly stodgy and clunky. It’s made with far less skill than, for instance, the “Keystone Kops” films that it ridicules by reducing them to pie-throwing free-for-alls. Those films, produced under the astute supervision of Mack Sennett, at least knew how to present actions for maximum visual impact, and they could tell clear and cohesive stories — two things that Won Ton Ton: The Dog Who Saved Hollywood cannot do. 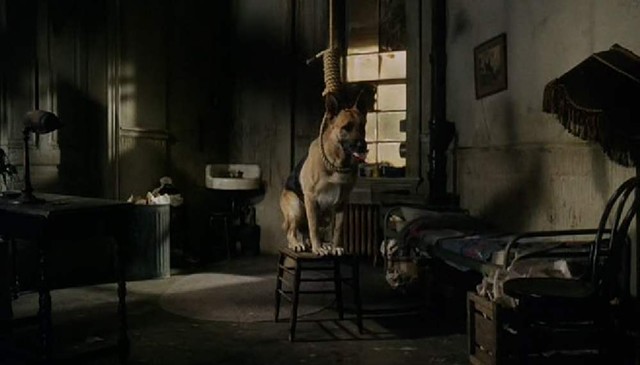