What I'm Watching: "Battle for Milkquarious" 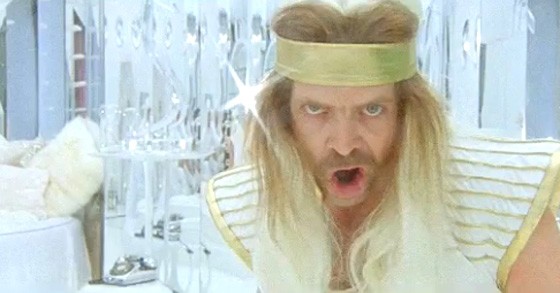 I hate advertisements. I use browser plug-ins to remove them from all the webpages I visit, and they’re one of the main reasons I no longer watch traditional broadcast television. While I acknowledge that their visual style can surpass those of current TV and film, I just can’t bear to be harangued into buying something; the capitalist impulse is so naked and brazen that it makes me shiver a bit. It still boggles my mind that so many people look forward to watching the ads that air during the Super Bowl, for instance. They might sometimes be clever, but that cleverness is all in the name of getting you to part with your money. And don’t even get me started on the ads that play in movie theaters.

So I must report with some regret that I really enjoyed watching “The Battle for Milkquarious,” a 22-minute-long rock-opera advertisement … for milk.

“The Battle for Milkquarious” was unleashed on an unsuspecting internet in 2009, but it somehow passed me by. (I can’t see everything, people.) I’d never actually heard of it, and came to it through a “back door”: The short film’s music was created and performed by one of my favorite bands, Electric Six, whose music I’ve been listening to obsessively lately. Having absorbed their LP releases, I’d moved on to the side projects and ephemera, and the soundtrack to a milk-based short film certainly qualifies as the latter.

This good-naturedly ironic, hilarious movie was funded by the Dairy Council of California, the same organization behind the original “Got milk?” campaign, which the agency then licensed to milk producers all over the country. At every opportunity, the film refers, both directly and indirectly, to the marvelous benefits of a milk-centric diet. Its plot revolves around the large-scale theft of the titular city’s milk supply, a crippling event that spells doom for all Milkquarians. The main character, White Gold (“the most milk-tasticalest rock star in the super-universe”), refers often to the strength and beauty of his teeth and hair. When the character Jug Life expresses worry at one point, White Gold disagrees, telling him that he’s merely “dairy-deprived” — as if a steady influx of milk will cure all ills. In other words, the advertising messages of “Battle for Milkquarious” are loud and clear, and integrated into the text in dozens of ways. Nonetheless, I enjoyed the hell out of it.

Trying to figure out why I wasn’t so terribly bothered by the movie’s advertising message, all I can come up with is that I like its soundtrack very much (as I expected I would), and I appreciate the film’s sense of humor. It’s genuinely funny stuff.

I’m glad that I came to the film via my interest in Electric Six, whose music I love and whose sense of humor I admire tremendously. The band’s songs are full of cleverly ironic rock-star posturing and very funny wordplay, all couched within music that’s equal parts glam, disco and arena rock. I could barely love a band more than I love Electric Six. So their providing my entrée to the film was fortuitous, because their music and “Battle for Milkquarious” are nearly identical in tone — which is surely why the band was hired to perform the film’s music.

Yet lots of ads are funny and feature music that I like — and I still avoid them. Why do I find myself untroubled by “Battle for Milkquarious”? There’s really only one answer: its story.

Or, rather, the fact that “Battle for Milkquarious” has a story at all puts it in a different class for me. (Well, that and the fact that it’s, you know, a 22-minute glam rock opera about dairy products that features a magical “uni-pega-cow” and milk-filled guitars that shoot out zaptacular beams of pure dairy energy.) It’s not that the story is used to “cover up” the film’s advertising efforts — far from it: The story is about milk and its wondrously healthful properties. The film was designed as part of a multi-platform ad campaign that encouraged fans to produce their own “Milkquarian” videos as a way to earn money for their schools.

Story can conquer a great many advertising ills. Even when the characters in an ad are ill-sketched — as are those in “Battle for Milkquarious” — they still provide compelling points of entry for the viewer. Characters, even in ads, have goals, and observing their process of attempting to achieve those goals usually makes for appealing entertainment, even when that entertainment is inflected by a promotional cause.

The Dairy Council of California seems to have figured this business out. I’d suggest that the chief reason Michael Bay’s famous “Aaron Burr” “Got milk?” commercial is so well regarded is that it condenses a clear and clever narrative into just 60 seconds. Much about the story of “Battle for Milkquarious” is imperfect: Jug Life’s fate is left unclear; White Gold and Jug Life just happen, after a storm, to wash up on the shore of the island where the lovely Strawberry Summers is held captive by the fiendish Nasterious; and the movie even resorts to the hoariest of clichés: that of the secret family ties that link the protagonist and the antagonist. I’m willing to forgive these and other minor missteps in this indulgently silly film because its very status as a narrative text makes it far more engaging than other advertisements. 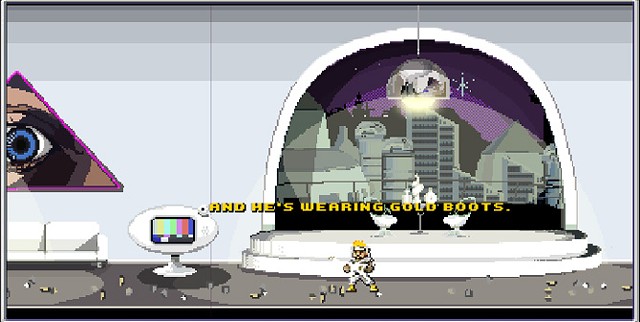 But here’s the thing. Every film is made to make a buck, even if its capitalist intentions are not so obvious as those of “Battle for Milkquarious.” Films may be works of art, but they’re also works of commerce that are designed to sell tickets (and videos, and posters, and soundtracks, and such “ancillaries” as lunchboxes and flame-retardant children’s pajamas). Moreover, modern films are laden with product placements that are so sneaky that, even when you don’t notice them, your subconscious does. In this regard, I admire “Battle for Milkquarious” for wearing its intentions on its narrative sleeve, rather than trying covertly to encourage us to buy whatever watch Brad Pitt is wearing.

Looking back, I think I’ve overthought this whole thing. “Battle for Milkquarious” is some funny shit. That about sums it up. Go watch it. It will make you laugh. If it makes you drink a glass of milk, too, well, then, that’s not such a bad thing, is it? I understand that the calcium in milk helps to build strong bones, and makes hair and teeth glow with a healthy sheen. Who wouldn’t want that?