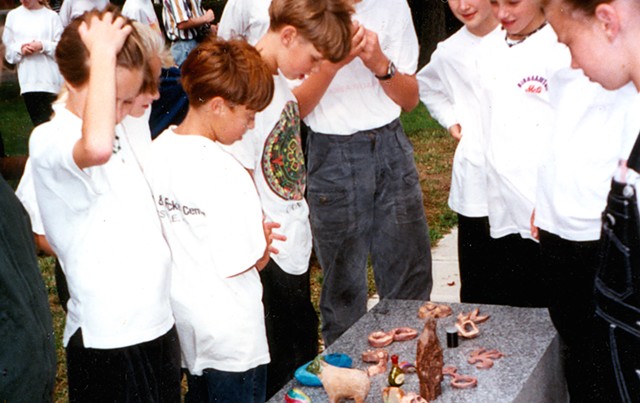 The arrival of autumn, a bittersweet season, makes many Vermonters particularly conscious of the passage of time. And Burlington sculptor Kate Pond will augment that awareness on Wednesday, September 23, the first day of fall. She will preside over the unearthing of objects buried 21 years ago underneath a sculpture designed with the equinox in mind.

The event takes place in Stanstead, a Québec town near the Vermont border. Pond chose it as the site for “Zig Zag,” a steel triangle with an off-kilter base, because the 45-degree latitude border marks the midpoint between the equator and the North Pole. And, as is the case with the four other pieces that make up her World Sculpture Project, geographic location is integral to Pond’s aim of incorporating Earth-sun-star alignments into her art.

A shadow cast from the top of “Zig Zag” falls directly along the beam at its bottom on the days when summer melts into fall and winter slips into spring.

The placement of “Zig Zag” carries a personal meaning, as well, for the 77-year-old sculptor. “Members of my family, on both sides, have their roots along the Vermont-Québec border, going back eight generations,” Pond notes.

A few of the local residents who sculpted and buried clay objects in 1994 will be on hand for the resurrection. They were preteens then; they’re in their thirties now.

About 40 current students from two nearby elementary schools and the Stanstead high school will also take part in the event, which gets underway at 10:30 a.m. They’ll help wash the disinterred items, which will be transported to the nearby Colby-Curtis Museum. The figurines will be displayed along with some of the objects that had also been buried in the 1990s with Pond sculptures in Norway and Japan. A reception for that show is set for Tuesday, September 22, at 2 p.m.

Time capsules entombed at the World Sculpture Project’s two other sites — in Hawaii and New Zealand — are scheduled to be unearthed later this year.

“It’s very exciting for me to be bringing the project to completion,” Pond says.

But, even though all that was buried is now being brought back to the surface, the sculptures themselves will remain in place. And the shadows they cast will continue to accord with the cycle of the seasons or the day’s passage from darkness to light and back again.