Style Patrol: Who That? | Live Culture

Style Patrol: Who That? 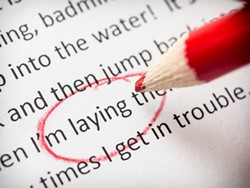 Seven Days recently received the following as a submission to our popular "WTF" column:

WTF is up with so many people, including talking heads, politicians, college types and tradespeople, speaking and writing "that" instead of "who" when referring to people?

Because "WTF" is generally devoted to the solution of local mysteries, I decided to take this one on in Style Patrol, instead.


Our grammar-minded reader appears to be referring to sentences like these:

Egbert is the first boy that I kissed.

They are the couple that gave me a ride to Hinesburg.


Are these statements grammatically wrong? Personally, I would say yep and correct them to

Egbert is the first boy whom I kissed.

They are the couple who gave me a ride to Hinesburg.

At least, such was my reasoning. Imagine my surprise when I checked my usual favorite authority, Patricia T. O'Conner's Woe Is I: The Grammarphobe's Guide to Better English in Plain English, to find the following statement:

If both [who and that for people] sound right, it's because both are right.

A person can be either a that or a who. A thing, on the other hand, is always a that.


WTF? Has Patricia failed me? Is it the people who make a fuss over who vs. that who are actually wrong?

Grammar Girl was equally shocked when she found the same permissive attitude in the American Heritage Dictionary. Here's her explanation of the who/that situation. Turns out, the use of that for people is an English tradition going all the way back to Chaucer.

So, much as I hate to say it, dear reader, those many folks from all walks of life who use that to refer to people are not exactly wrong. However, it could be argued that who is better usage, especially when writing, because it allows you to give special status to sentient human beings — and not objectify them, as it were.

Consider this: When you refer to a beloved pet, do you say, "Mr. Fluffernutter is the one who shredded the sofa that I purchased for $6,000"? I'm guessing that, at least sometimes, you do, because the pronoun who allows you to distinguish Mr. Fluffernutter from your sofa and to indicate which one has more non-monetary value to you.

But we still haven't answered the other part of our reader's question. OK, so who and that for people are probably both technically correct. That doesn't explain why so many speakers and writers seem to prefer the latter to the former.

It's an anecdotal observation, so I'll give it an anecdotal, intuitive answer — in other words, a guess. My guess is that at least some people say, "The person that…" instead of "The person who…" because they fear the who/whom distinction.

What if I use who when I'm supposed to use whom, or vice versa? Will I look stupid? It's easier just to use the pronoun that, which has no such perplexing second form.

In my experience, it's not easy to teach the who/whom distinction to anyone who has never studied Latin, German or another language with an accusative case. But here's a primer.

Whom refers to a noun that is the direct object of a verb (having something done to it). Who refers to the subject of the verb (doing something). Think of who/whom as being like she/her or he/him or they/them, and it gets easier.


Who also becomes whom when it's the object of a preposition:


Some people avoid whom like the plague. Some grammatically well-versed people use it when they actually need who. Why? Because sentences can get confusing. For instance:

Here are the candidates whom I think have a chance against Hillary.


Bzzz, this sentence is WRONG. But why?! Aren't the candidates the object of the verb think here?

Actually, no. If you removed the phrase "I think" from this sentence, it would still make perfect sense (albeit being more assertively phrased). And it would obviously need who, not whom:

Here are the candidates who have a chance against Hillary.


The candidates are the ones doing something in the sentence (having a chance). Your "I think" is basically an aside — place it in parentheses, and the meaning doesn't change. So the correct version is

Here are the candidates who I think have a chance against Hillary.

The man who the state alleges killed his wife is out on bail.


In this case, the "aside" is crucial to the meaning of the sentence. But not to its grammar. Place "the state alleges" in parentheses, and you'll see that "the man" is actually the subject of "kill" ("his wife" is the object). "The state alleges him killed his wife" is obviously wrong — and so is whom in the more complicated version.

Contrast this sentence, in which whom is correct:

That is the man whom the state indicted for allegedly killing his wife. ("The man" is the direct object of "indict.")


So, yeah, who/whom is a tricky business. Thing is, if you're speaking rather than writing, 99.5 percent of modern English speakers are unlikely to notice or care which you use. Good news for those to whom the decision is a trial.

Style Patrol style usage grammar who whom that pronoun Web Only