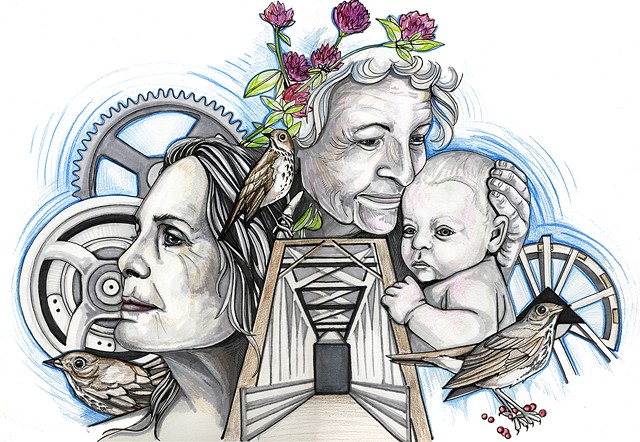 After a lengthier-than-expected deliberation process, the Cambridge Arts Council has selected the artist whose work will soon adorn a pair of disused silos in the village of Jeffersonville. The fantastical, semirealistic art of Sarah C. Rutherford will vivify the concrete silos, which are all that remain of the defunct Bell-Gates Lumber Corporation. The project is funded by a $15,000 grant from the Vermont Arts Council and the National Endowment for the Arts.

Rutherford was chosen from four finalists, a number that had been winnowed from the dozen proposals submitted to the CAC last spring. The three other finalists were Mary Hill, Anthill Collective and Mary Lacy, the last of whom is currently painting a mural on another pair of silos at the Burlington headquarters of Dealer.com.

CAC member Justin Marsh, one of the so-called "Silo Sisters" who've been working on this project, says, "The concepts that [Rutherford] had given us tied into the heritage of Vermont and the history of the sawmill being there. These were things we thought people would connect with."

A Rochester, N.Y., native and a graduate of the University of Vermont, Rutherford has painted more than 30 murals, including one at Highland Hospital in her hometown and another on the wall of the Living/Learning Center at her alma mater. "Vermont is a really important place to me," said Rutherford by phone from Rochester, where she's currently at work on another mural. "I'm really excited to be able not to just come back for a short period of time but to really invest in that community." 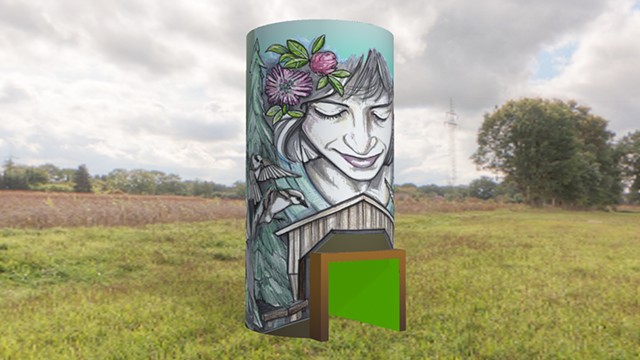 Rutherford's designs for the silos incorporate icons of Vermontiana, as well as images that evoke the history of the Jeffersonville area. She says she's been inspired by the "sense of rootedness" that she feels when she visits the village. She writes in an email, "Ultimately, I would like these murals to bring pride to the current residents for the rich history of the generations that came before, and for the beautiful home they are passing down to their children."

The project to spruce up the Jeffersonville silos with art was met with resistance from a small but vocal group of locals. On the local chapter of Front Porch Forum, most commenters spoke out in favor of somehow beautifying the silos; a minority opposed the plan, largely on the grounds that the painting would be akin to “graffiti.” The Cambridge Arts Council — which oversees projects in Jeffersonville, a village within the Town of Cambridge — nevertheless forged ahead.

The four finalists informally presented their proposals to residents during Cambridge’s recent Festival of the Arts. CAC members made their decision on August 22, after several days of deliberation. Marsh says the committee solicited a great deal of input from community members and that, though the voting was close, "We realize that any of [the finalists] would do a fine job. In the end, we really could not go wrong with who we ended up with."

As summer and early fall are high time for muralists, Rutherford will meet with the Silo Sisters this winter to refine and finalize her submitted concepts. She is expected to paint the silos in June and July of 2016. A formal ribbon-cutting ceremony will take place afterward in August, during the next Festival of the Arts.