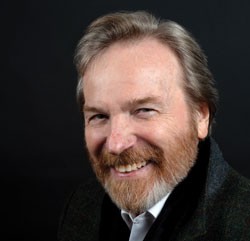 Wind Ridge Books recently announced that Burlington writer Daniel Lusk has won a 2016 Pushcart Prize for his essay "Bomb," published in New Letters, a quarterly based at the University of Missouri-Kansas City.

The Pushcart Prize anthologies collect the "best of the small presses" in a given year. Many writers are nominated, because any small journal or press can submit its own authors for the prize, but few are chosen. Last year's winners included such heavy hitters as Russell Banks, Rebecca Solnit and former poet laureate of Vermont Ellen Bryant Voigt.

Lusk is a prolific poet; his seven collections include KIN (2013) and The Vermeer Suite, due out from Wind Ridge — where Lusk is also the board president (see story here) — this September. Here's a review of his memoir-in-essays, Girls I Never Married, that appeared in Seven Days last March. Here's our 2011 story on Lusk's poetry project involving Lake Champlain, and here's Ethan de Seife's report from a poetry workshop that Lusk conducted in 2013 under Wind Ridge's auspices. Seems he's a busy guy.

The Pushcart folks don't yet appear to have announced the awards officially, but the 2016 anthology will be published this November 1, according to online retailers.

While Lusk, who's in his seventies, has been writing for decades, 24-year-old Brattleboro poet GennaRose Nethercott is just getting started. And her start is a "badass" one, according to Ben Aleshire of Burlington's Honeybee Press, who is publishing Nethercott's first collection, Poems for Strangers.

Take that title literally. Like Aleshire himself, Nethercott is a practitioner of a form of poetry busking. (The two of them served up ex tempore verse to the masses at this past July's Ramble in Burlington's Old North End.)

According to the press release, "The book collects poems commissioned by strangers in the street, and composed spontaneously on a portable, manual, Hermes Rocket typewriter."

Nethercott is a Bratt native who calls the town home when she's not touring her "poetry booth" hither and yon — for instance, to Edinburgh's Fringe Festival, or to Paris, where she did a residency at the venerable bookstore Shakespeare and Company.

She'll launch Poems for Strangers at two upcoming reading/receptions: one on Wednesday, August 12, 7:30 to 9:30 p.m., at the Green Door Studio in Burlington; and one on Friday, August 14, 6 to 9 p.m., at Amy's Bakery Arts Café in Brattleboro.

Want a taste? Here's an excerpt from Nethercott's poem "On Longing":

If I have learned anything, it is that happiness

is not a room one can walk back into. The bed
is not made. The book you were reading is not

on the mantel where you left it. I have walked
through empty corridors knocking on walls.

Have you heard it — the echo of a doorless hall?


Finally, what am I reading this month? Frankly, not a lot. For work, I hope soon to start local poet David Cavanagh's latest collection, Straddle (he'll read from it in September). For fun, because summer is Creepy Book Season for me, I'm anticipating a YA novel called The Creeping, due on the 18th.

Yes, I read YA — because I write it, and because I like it. And because it can get really, really weird. Recently I finished The Sacred Lies of Minnow Bly, a gorgeously written book narrated by a handless teenage refugee from a bizarre religious cult. That's the kind of premise you don't soon forget.