What I'm Watching: Pain and Gain 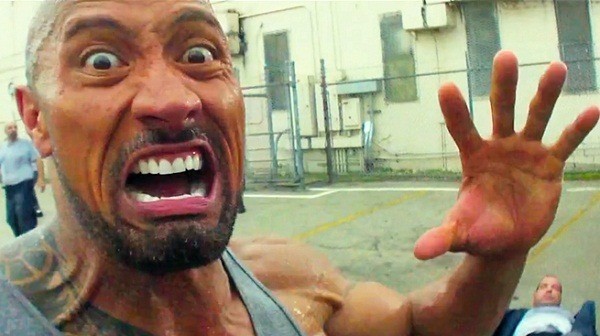 Though I’ll be the first one to grant that he has a lot to answer for after making those execrable Transformers movies, director Michael Bay is, in my opinion, generally misunderstood. I don’t think he’s a cinematic genius on the order of Werner Herzog or Brian De Palma or anything like that, but I do think he’s been unfairly relegated to the bin in which we place makers of mindless, fast-moving action films. Bay is a smarter filmmaker than that.

I recently watched Bay’s 2013 film Pain and Gain; though it’s a bit overlong and sags in the middle, I regard it as one of his best films, joining (in my estimation) The Rock and The Island — and, of course, the famous “Aaron Burr” milk commercial.

Actually, that now-semi-legendary commercial (inasmuch as such things can achieve legendary status) highlights many of Bay’s strengths as a director, which he developed at the helm of many a music video.

Bay is quite gifted in using camera movements to reveal pertinent story information, as demonstrated in the opening few shots of the commercial, where tracking shots and tilts inform viewers of the main character’s specialized knowledge of Alexander Hamilton and Aaron Burr. Bay is also noted for his visual dynamism. About 18 seconds into the milk commercial, notice the shot that tracks in to show the portrait of Alexander Hamilton. The bed frame in the foreground is entirely unnecessary, as the portrait would be clearly visible without it. Yet Bay positions the bed frame so that the moving camera turns its posts into a moving “frame” for the painting. The shifting background and foreground planes lend this shot a visual excitement and playfulness that it wouldn’t otherwise have; note also how, in the shot’s final image, the bed frame is positioned perfectly to highlight and thereby draw attention to the portrait. It’s a skillful shot, and it’s one of the reasons that this commercial has won awards and is so fondly remembered. It’s visually clever and exciting. I’ll admit that Bay often goes too far in ensuring that every damn thing in his films is in constant movement. He’s at his worst (as many critics have noted) in Transformers: Revenge of the Fallen, in which the titular alien robots have so many moving parts in such constant flux that I, for one, had trouble even following the action. It was literally painful to watch because it was impossible to be certain of what I was looking at. An incredibly unrestful film experience. Bay is a curious filmmaker. He’s not unlike Robert Zemeckis, in that when he’s good, he’s very, very good, but when he’s bad, he’s horrid.

(In the interest of full disclosure, I should note that Bay and I went through the same film program at Wesleyan University, though he graduated five years before I even enrolled. I’ve never met him, even at alumni functions. We took classes in the same classrooms, and had the same advisor, Jeanine Basinger, but that’s as far as our connections go.) 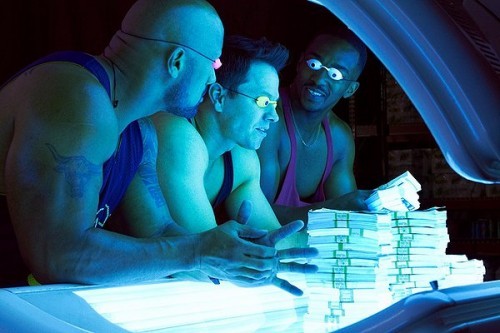 Pain and Gain is visually dynamic even by Michael Bay’s high standards. I was surprised and somewhat heartened to see him employing video cameras to catch “on the fly” shots. In several scenes, for instance, he mounts them beneath the steering wheel of a car in motion, so that we get fisheye views of driver and passenger.

I don’t believe he used such relatively lower-definition video cameras indiscriminately, or to make his images look “immediate.” Again, with Bay, it’s all about visual dynamism, a quality that can be achieved through many means. In these cases, the resolution of the steering-wheel-cam images is lower than those of the rest of the film, which creates a noticeable visual tension. As well, the extremely wide-angle lens on these video cameras exaggerates distances between foreground and background; in these shots, the people in the car appear relatively properly proportioned, but the backgrounds whiz by at an unnatural rate. It’s all in the name of imbuing the shots with more contrast and excitement.

Or check out the terrific shot below, in which Bay shoots star Mark Wahlberg, who plays a meathead bodybuilder criminal, so that his already jacked body looks grossly overinflated. That simple, dynamic tension between the above-water and below-water parts of the image has a direct, clever narrative meaning: This guy is so stupid that he literally has a tiny brain that is nowhere near as developed as his muscles.

Nevertheless, it wasn’t the visual dynamism of Pain and Gain that made it so appealing to me, even as it is a very fun movie to watch. (Even my wife, who was already very tired when we started the film around 10 p.m. one night, found herself sufficiently engaged to watch the whole thing before hitting the sack.)

What I liked most about the film is that its narrators are unreliable. Several characters in Pain and Gain provide voiceover narration that provides exposition and gives us glimpses into their mental and emotional states. Bay actually finds a kind of sonic analogue to his restless pursuit of visual dynamism by parsing out the voiceovers to multiple characters, a relatively unusual decision. (Most films that feature voiceover narration restrict that narration to a single character.)

Here, though, the joke is that all of the narrators (save one: the Ed Harris character, a savvy investigator) are meatheads, and that most of what they say is incorrect and/or stupid. Here’s a fine example, uttered in voiceover by Wahlberg’s character, Daniel Lugo: “If you’re willing to do the work, you can have anything. That’s what makes the U.S. of A. great. When it started, America was just a handful of scrawny colonies. Now, it’s the most buff, pumped-up country on the planet. That’s pretty rad.”

Lugo, a bodybuilder who enlists friends in an idiotic kidnapping scheme, can only see the world through the eyes of a fitness fanatic. Here, Lugo’s likening of his buff self to the American Spirit is hilariously representative of how wrong-headed he is. This is not a smart man — yet he’s our main guide through the narrative of Pain and Gain. By revealing his stupidity — and, importantly, by showing that the character is unaware of his own stupidity — the film inserts itself into a literary tradition that I’ve always found compelling.

Crafting an unreliable narrator — in this case, narrators, as several other moronic characters share the voiceover duties — is not an easy feat. Such characters have to be clueless, yet knowledgeable enough to drop unintentional hints to readers or viewers that their impressions are incorrect or incomplete. To me, the finest example of the unreliable narrator is Ford Madox Ford’s novel The Good Soldier, which is astonishing for the subtle ways in which we are made to understand all the things that its foolish narrator does not know. Please read this book. It’s brilliant.

Film makes it easier than literature to create an unreliable narrator, because we are able to see the characters’ ill-considered actions, not just read their descriptions thereof. I’ll grant that, in Pain and Gain, the unreliable voiceovers are made somewhat redundant by the visual depiction of foolish actions, but that doesn’t make the technique any less clever — or unexpected, given its source. Pain and Gain struck me as not only one of Michael Bay’s most visually exciting films, but also probably his most intelligent.

It’s fascinating to me, then, that it’s Bay’s “stupid” movies that do so well at the box office. As this chart from Box Office Mojo shows, Bay’s single highest-grossing film is the one I’ve identified above as his stupidest: the second Transformers movie. Pain and Gain, which took in “only” about $50 million, ranks as Bay’s second-lowest-grossing film, after The Island (which I love), and not far behind the underrated Bad Boys.

That’s right: There appears to be an inverse relationship between the quality of Michael Bay’s films and the amount of money they rake in. (The Rock is the outlier: It's a great movie that took in $134 million.) It gives one pause. Audiences seem to love to hate Michael Bay’s movies, but they’re the ones who are paying for the privilege of doing so.