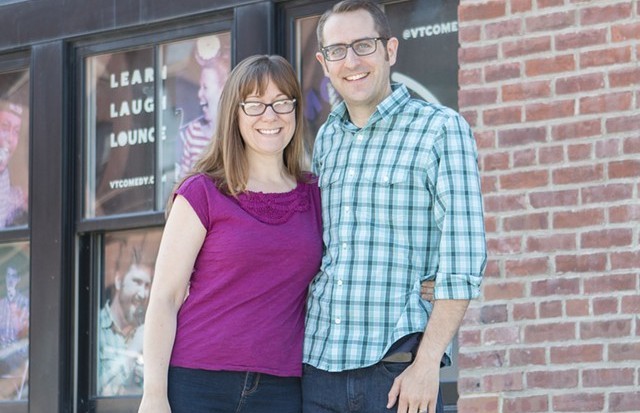 Stop me if you've heard this one before. A horse, a priest and Donald Trump walk into a bar, look around and say, "Holy shit. It's a comedy club in Burlington!"

OK, so maybe my punchline needs a little work. But starting the third week of November I could brush up on my joke construction at the Vermont Comedy Club. No joke. Co-owners, comedy moguls and sickeningly cute married couple Natalie Miller and Nathan Hartswick — seen above in a photo taken by a guy named Dan Bowles, which is kinda freakin' me out — announced earlier this week that they have finally broken ground on their long-awaited comedy club.

The venue, which will take up residence in the old Armory building on Main Street in Burlington — formerly home Sh-Na-Na's and Hunt's and also occupied by the Hilton Garden Inn — will open in November with the 2015 Vermont's Funniest Comedian competition. Appropriate for the soon-to-be epicenter of local comedy. (Obviously, based on the previous joke, I will not be competing.)

In a press release announcing the groundbreaking, Miller and Hartswick and developer Erik Hoekstra said a bunch of stuff you'd expect to see in a glowing press release. ("We're totes pumped, you guys." "This will be great for the children." "I just wanna thank God and give 110%." "Feel the Bern." And so on.)

OK, I made up those quotes, because I hate reading press releases. But the point is this: After well more than a year of planning and speculation, VCC is going to open. For real. And that's great news. (Also cool news: The team behind hot BTV eatery Butch + Babe's is designing the VCC menu.)

Stay tuned for updates — and better jokes — as events warrant.