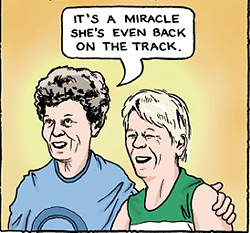 Vermonters Flo Meiler and Barbara Jordan are two hard-core medal heads: As readers may recall from Seven Days' July 8, 2015, Cartoon Issue story, "Silver and Gold," Meiler, 81, of Shelburne, and Jordan, 79, of South Burlington, are longtime friends, training partners and competitors in the National Senior Games, aka "Senior Olympics." For nearly two decades, the pair of track-and-field stars have been breaking world and national records in their age category.

But in 2013, Jordan's athletic career was nearly derailed by a diagnosis of breast and lung cancer, which claimed part of her lung. As recently as two weeks ago, Jordan wasn't even sure if she'd be up for competing in this year's games, which were held in various cities in Minnesota from July 3 to 16.

Jordan not only went for it, she opened up a big can of Green Mountain whoop-ass on her competition: In all, she took home three gold medals, one silver medal and two bronze. Not bad for someone who hasn't competed in nearly two years. One of her golds was in the 4-by-100-meter relay with Meiler and two other teammates. Together, the four women set a new world record in the 80-to-84 age bracket. (Jordan turns 80 by year's end, which is why she competes in that age category.)

Literally. As only one one-hundredth of a second separated the two women's finishes, the judges had to review the video before announcing a winner.

Only one minor controversy marred the women's otherwise stellar performances. In the triple jump, Meiler won the gold medal by setting a new American record, leaping 5.89 meters. That night, however, she was informed by officials that they couldn't officially recognize the U.S. record because nobody was manning the wind gauge at the time of her win. Talk about a senior moment on someone's part!

Still, Meiler is unperturbed and has more important things to think about. She has just two weeks to train for the World Masters Athletic Outdoor Championships, which are being held this year in Lyon, France.

“This is gonna be pretty hectic," Meiler says. “I could really use four weeks, but I guess I’m going to have to do the best I can.”

Something tells us that Meiler's best won't be too shabby.

To see the original cartoon about Meiler and Jordan, click here.