What I'm Watching: The 2015 'Gathering of the Juggalos' Infomercial | Live Culture

What I'm Watching: The 2015 'Gathering of the Juggalos' Infomercial

Every year around this time, the far-flung organisms of a colorful and peculiarly American species converge on their ancestral spawning grounds in the Midwest. There they engage in ritualistic behavior unheard of anywhere else in the animal kingdom. These rituals include arrhythmic gyrations, decorative facial camouflage and the liberal consumption and dispersion of the brightly colored nectar on which the species subsists.

I’m referring, of course, to the annual Gathering of the Juggalos.

For the uninitiated, a Juggalo is a dedicated fan of Insane Clown Posse, the hip-hop band that has been producing “horrorcore” music since the early 1990s. Somehow this band has inspired not only a legion of imitators but a giganto-legion of fans, of whom many of the most hardcore converge every year for a days-long festival that celebrates all things Juggalo. The objects of their celebration include but are not limited to

- above all, Insane Clown Posse (ICP)
- Faygo soda of all flavors
- female nudity
- backyard wrestling and other such quasi-sports
- alcohol
- ninjas
- face paint

The best introduction to the annual phenomenon known as the Gathering of the Juggalos is probably this Vice magazine article from 2007. Still a good read.

Every year, shortly before the Gathering takes place, the ICP head office (I suppose) produces what is effectively an elaborate informercial for the coming convergence. These videos highlight all of the musical acts and attractions that will appear at that year’s Gathering; the announcements are typically strung together with some sort of thin narrative.
I dislike ICP’s music and never, ever want to find myself within 15 miles of a Juggalo gathering, either formal or informal. But I genuinely anticipate the release of every year’s infomercial, because it affords a window into a subculture — or maybe it’s large enough to be called a culture — that is almost impossibly foreign to me. It’s as if I’m given, once a year, the chance to look through an incredibly powerful telescope that reveals a bizarre alien society on some face-painted planet orbiting Alpha Centauri. Juggalo culture doesn’t really compute for me.

And that’s cool. Get on with your bad selves, Juggalos. I hope you have a grand old party.

As a media object, the annual Gathering of the Juggalos infomercial is nothing less than fascinating. It’s a bizarre olio of musicians I’ve never heard of, ham-handed narratives, casual sexism and cultural signifiers that I’m not equipped to understand. I usually find my mouth hanging wide open when I watch one of these things. Perhaps you will, too; go ahead and give 25 minutes of your day to diving into this bizarre cultural phenomenon by watching the video above.

Each year’s infomercial features roughly the same proportions of decently high production values and generalized incompetence. It’s a fascinating mix. You can tell that money went into producing this thing: The CGI is fairly good, for instance, and the live-action portions required some solid production values.

But peeking through nearly every crack is a sign that this is not an altogether well-thought-out endeavor. The “story” of the video (such as it is) wobbles arbitrarily from one event to another with only the thinnest of causal linkages. This can be forgiven, since the narrative is only a flimsy vehicle for the promotional footage.

One of my favorite errors is a twofer: a mispronunciation and a misspelling of the name of comedian Judah Friedlander, who will appear at this year’s gathering. The lower-third text that identifies him spells his surname “Freedlander” while the voiceover pronounces his name “Freelander.” Whatever, I guess. Juggalos probably don’t give a shit about grammar and spelling, and I can (through gritted teeth) let that one go, too.

More troubling to me are the casual sexism and homophobia that permeate the video and make it, frankly, less fun (and funny). Granted, one would almost expect a macho subculture like this one — one with an avowed and oft-stated fondness for women’s nipples — to be somewhat less than open-minded. It shouldn’t come as a surprise. But actually it sort of does, because such attitudes seem to run counter to the spirit of "family" about which Juggalos so proudly declaim.

Go back and read that Vice article, or any of the countless other “WTF are Juggalos all about?” articles, and you’ll see repeated reference to one of the two Juggalo chants. Not “Woot, woot!”, which seems to be an all-purpose indicator of approval and excitement, but “FAM-I-LY,” the rallying cry that unites all Juggalos. As numerous articles argue, this “FAM-I-LY” chant, heard nearly constantly at any Juggalo event, refers to the spirit of inclusiveness with which Juggalo culture embraces all who seek its path. Those who follow the ICP, the theory goes, are often from backgrounds that include economic and personal hardship, and they’ve left their actual families to join one that accepts them as they are — provided, of course, that they’re Juggalos.

Which is why I was so disappointed to see this year’s infomercial making casual use of homophobic, “get your hand off my ass”-style jokes; and to note that female performers, when they are rarely mentioned, are objectified in ways that the male performers are not. The one female character in the video is referred to (by a computer) as “Muffin Tits"; the male characters receive no such treatment. The worst example occurs in the voiceover description of the female hip-hop artist Nova Rockafeller, who is described as having a “sexy ass.” The bodies and appearances of the male performers are never mentioned. 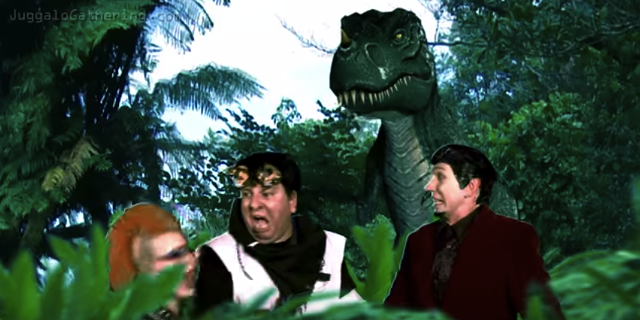 Maybe I’m not grasping the whole picture; maybe my 1990s liberal arts education prevents me from understanding that this earthy approach to sexuality is part and parcel of Juggalo culture. Women who join this crowd may well enter it with the understanding that they will be objectified in one way or another. That seems like a pretty good reason for a woman not to join a given subculture, but one can only hope such decisions are made in an informed way. Maybe Nova Rockafeller enjoys being described in a sexualized way; I don’t know.

I fully admit that I may not “get” this culture, and that there are nuances I don't understand. That sounds snarky, but it’s not meant that way. Juggalo culture is no less valid than any other sociological force. But it is troubling that there’s a special term for female Juggalos — “Juggalettes” — because it implies that Juggalos are the norm and Juggalettes are somehow “other.”

As long as ICP, Inc., keeps producing infomercials for the Gathering of the Juggalos, I’ll keep watching them. This subculture is curiously fascinating to me, and watching the videos is armchair anthropology at its most enjoyable. I do wish, though, that these videos would tone down the various unpleasant attitudes they espouse. Those are even more distasteful than the music — which, to my ears, is universally horrendous.