The First 50 Pages: The Remedy 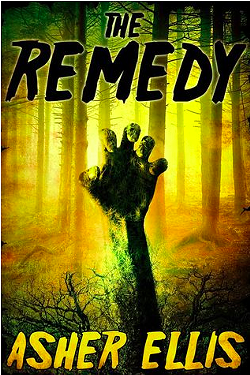 In this monthly Live Culture feature, I review the first 50 pages of a local book — and sometimes, if I feel like it, more.

The author
Ellis holds an MFA from the University of Southern Maine and teaches English at Colby-Sawyer College in New Hampshire (here's his website). His publisher is the new digital imprint of Full Fathom Five, author James Frey's book packaging company, so the book is available only in e-formats.

The deal
The Remedy opens with two rednecks pounding beers at a desolate hunting camp. If you guessed a horrible fate will shortly befall them, horror is clearly your genre.

Within a few pages, one dude has fallen prey to backwoods cannibals, and the other is rapidly being covered by a mysterious green fungus. Seems the forest is infested with the latter, and the former — cannibalism, that is — is the only remedy.

The scene shifts to a car approaching the U.S. border, packed with college students who just made a mammoth weed score in Montréal. Can they risk the crossing? They meet a young stranger who has a seemingly better idea: He'll show them a woodland foot trail that bypasses the border guards. The posers and stoners decide to place their trust in this local yokel. And Leigh, the book's token Nice Girl who doesn't do drugs or hookups, thinks he's mighty dreamy.


The kids split up and pursue separate routes through the woods. What could go wrong?

My favorite sentence(s)
A surfer dude muses on his own limitations: "But perhaps there were some things you couldn't get away from. Maybe shallowness wasn't a product of poor nurturing. It could be genetic, like when the rotten genes that caused alcoholism jumped from one generation to the next."

A quote that puts the book in a nutshell
"It was like watching shag carpeting knit itself — thick green fibrous strands that no one would want on their living room floor, let alone the back of their hand. But that was exactly where this fungus was heading as it continued to feast on his flesh."

Will I read the rest?
Skimmed it. So I can say that, while The Remedy takes no time to reveal its central premise — it's all in the prologue — there are a few unexpected and inventive twists later.

The Remedy is yet another play on the "cabin in the woods" horror trope. It doesn't outright satirize the clichés of these stories, like The Cabin in the Woods or Tucker and Dale vs. Evil. But neither does it take them seriously enough to make them scary again.

Ellis doesn't build dread by suspenseful degrees, like Scott Smith in his novel The Ruins, which had a similar dumb-kids-trapped-with-encroaching-body-horror premise. He plunks us immediately in the middle of the gore and encourages the reader to feel superior to these characters who don't realize they're just a bunch of hapless archetypes.

The book goes over the top, self-consciously so, and presumes an audience of self-aware horror fans who enjoy watching the blood spatter (and go in all sorts of places where blood really shouldn't go, shudder). Expect scenes of topless female characters being groped by boyfriends and cannibals alike, in vintage slasher-movie fashion. (One nutty scene involving a male character brings a bit of gender parity to the sexualized violence, for better or worse.) In sum, a better point of comparison than the films listed above might be Eli Roth's Cabin Fever.

I'm a horror fan who'd rather be painstakingly creeped out than grossed out (The Descent is my all-time favorite "evil in the woods" movie), so The Remedy didn't scratch my itch. But I have no doubt there are others who will eat it up. (So to speak.)

Finally, a horror novel set in the Northeast Kingdom (or the Bennington Triangle) is always welcome. Stephen King's Maine don't got nothing on our wild places!

A note to authors: I choose books for this column at my own discretion. Please don't send me your book with a specific request that I feature it here (or not do so). Please don't ask for an explanation either way. And please recognize that these write-ups are not always "reviews," which would entail reading the entire book.