What I'm Watching: Under the Skin | Live Culture

What I'm Watching: Under the Skin 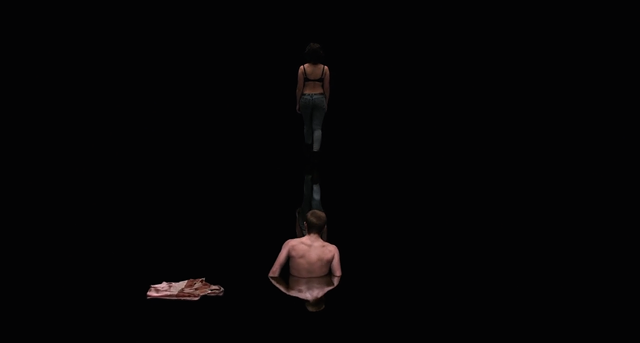 Under the Skin showed up on many 2013 best-of lists, but I was unable to catch it when it played in local cinemas. Having finally gotten around to seeing it on video, I regret not watching the film on the big screen. It’s utterly gorgeous on my pretty good TV, and would have been more so on a movie screen.

Many of the images in Under the Skin are nothing less than stunning — all the more so for being, often, so very strange. The opening of the film is one of the most peculiar I’ve seen recently, in that it gives absolutely no context for the images presented. Those images, accompanied by a series of keening electronic sounds, are rounded, brilliantly lit shapes moving slowly against a totally dark field. It’s impossible to know what they are, but they sure are pretty to look at. The moving shapes soon coalesce into the form of a human eye — or an excellent facsimile thereof. In this way a key theme of of Under the Skin is introduced: the act of seeing, and the idea that things are not what they seem.

As we watch the film, we slowly manage to put together that the unnamed central character (Scarlett Johansson) is some sort of malevolent alien in human skin who lures men to a remote location. In this location — a ramshackle house in Scotland — this beautiful “woman” entices the men into a totally black room, where they slowly sink into a dark, viscous liquid atop which she is somehow able to walk. Though it’s never spelled out for us exactly what happens to her victims, we soon learn that these unlucky men are drained of their “life essences” after floating in this viscid ooze.

I will not soon forget the eerie shots of soggy, sad, blank-faced men floating in dark, thick, semi-transparent liquid. I will especially not forget the shot in which one of those men is instantaneously reduced to an empty husk by some unseen, unexplained force.

Even more than its gorgeously bizarre visuals, the thing that struck me about Under the Skin was its remarkable narrative sparseness. Viewers are given little story information directly, and are thus encouraged/forced to connect the dots themselves. This is not a particularly difficult process, but it's a significant achievement for this film, which was given nationwide release, to put us through such a narrative wringer. Most mainstream films are far more explicit, even redundant, in communicating narrative information.

Under the Skin is extremely stingy with the story info it gives out — or, rather, gives away. The film keeps its viewers guessing about even the most basic information that it presents. We know, for instance, that the Johansson character has a relationship with a man who rides a motorcycle, but we don’t know the exact nature of that relationship. He is definitely her “boss” in some way, but that’s about all we can discern. Does she work for him? Is she his lover? His slave, his robot, his prisoner? All are possibilities, and the film does very little to encourage any one reading over another. 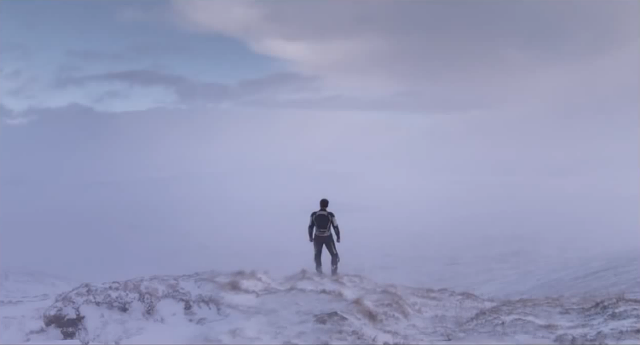 Compare this narrative approach to that of, for instance, another excellent sci-fi film, Doug Liman’s 2014 Edge of Tomorrow. In this film, the Tom Cruise character, Cage, is killed … but then somehow finds himself alive again (and again, and again…) with his personal clock “restarted” every time. For roughly the first third of the film, the audience is just as baffled as Cage as to why he has apparently achieved immortality.

But soon enough, Cage meets a character who can explain to him why this seemingly impossible thing keeps happening. At that point, the central narrative question of the film shifts from “Why does Cage keep getting resurrected?” to “How can Cage use this unusual skill to help defeat the alien invasion of earth?” In Under the Skin, the central narrative questions — Who or what is this creature? For what purpose is she luring these men to their death?” — remain with us for the entirety of the film.

That’s not to say that no other narrative questions arise. In fact, the film’s single best shot introduces a couple of complicating questions: In apparently recognizing in herself some form of humanity, has the alien decided to compromise her mission? If so, why? The film is no more forthcoming on these questions than on any of its other central narrative issues. 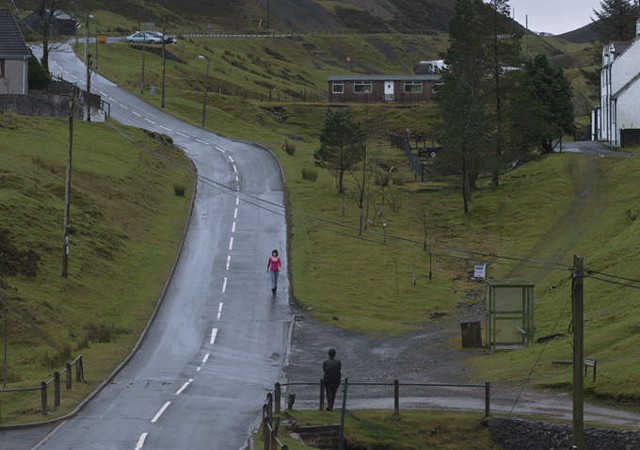 For me, the most (literally) jaw-dropping shot in Under the Skin is one that encapsulates the film’s finest qualities: visual beauty and narrative sparseness. On reflection (pun intended; see below), I find the shot to be the turning point of the entire film’s narrative and visual systems. It marks the point where the main character’s goals shift dramatically — though, true to form, we have to surmise that this shift has occurred. Director Jonathan Glazer does not spell it out for us, instead forcing us to draw fairly subtle conclusions about the film’s overall story and genre and its characters’ behavior.

The shot I’m referring to is a fairly long take in which the alien, after leading yet another man to his oozy demise, pauses in front of a mirror to observe and marvel at her “own” face. As she stares into the mirror, she moves slightly back and forth, thus bringing her reflected image in and out of focus — a visual analog of her part-human, part-alien existence. She seems fascinated and curious about herself. 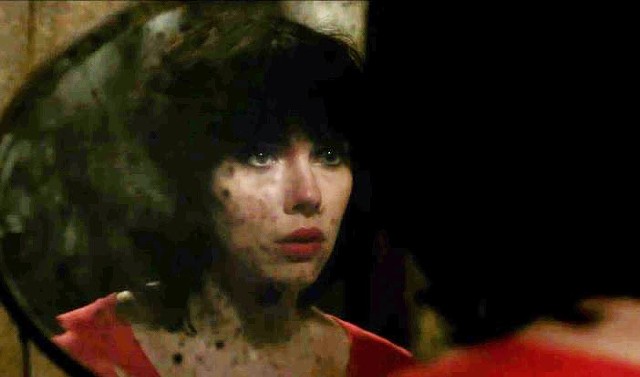 After this moment of apparent identity crisis, the alien makes a decision to free the man whom she’s just lured to her lair. Yet Glazer does not show us this action, forcing us to piece it together later. The film does not explain the nature of the alien’s realization, why she made it, how she frees her latest victim, or the victim’s reaction. The last we see of him, he’s fallen into the ooze; a couple scenes later, he’s wandering naked in the heath. Soon, after the alien has apparently made a decision to attempt to live as a human being, we see the naked man recaptured by the mysterious man on the motorcycle, who then embarks on a search for the alien herself.

The events that Glazer omits create more questions: Why must this man be recaptured? What are the consequences of the alien’s apparent act of treason? And, again, what is the nature of the relationship between the alien and the man on the motorcycle?

Under the Skin is remarkably stingy in handing out narrative information — yet its story is entirely comprehensible. Survey attentive viewers of the film, and I’m fairly certain they’ll concur on the following: In recognizing her quasi-humanity, the alien discovered her own sense of mercy and decided to free one of her victims; the alien wished to become more human, and became disappointed when she was unable to do so; the alien is in some way the servant of the man on the motorcycle, also an alien in human disguise, who supervises some sort of program to harvest men’s “life essences” for an obscure alien purpose.

Even if we don’t know exactly what happens, we can piece together the story so that it coheres logically. Which is why Under the Skin represents to me a major achievement in visual storytelling.