Soundbites Extra: Not So Quiet Riot 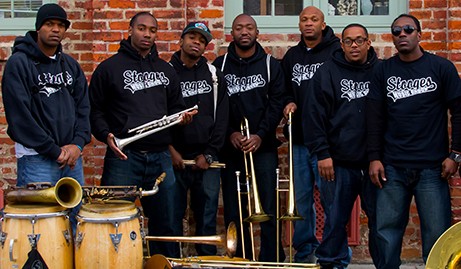 We're t-minus 24 hours from the start of this year's Burlington Discover Jazz Festival. So this week's Soundbites column was chock-full o' locally focused BDJF coverage. But that doesn't mean everything happening this week on the local scene is jazz-related. Just almost everything. With that in mind, here's some music news you can use that (mostly) have nothing to do with the impending jazzanalia.

———-
If you can't wait until Friday to spaz out with your jazz out, get yourself downtown this evening, Thursday, June 4. The venerable Stooges Brass Band from New Orleans kick off a monthlong Thursday residency with a surprise show. They'll start at the top block of Church Street, then march, second-line style, to City Hall Park, where they'll play a free 20-minute set. If you miss that, the band will be at ArtsRiot every Thursday in June.

Also, did you know you can hire a second-line band to follow you around in New Orleans? It's true.

———-
Speaking of ArtsRiot, a cool party is happening at the hip South End hub this Saturday, June 6. The bash is a launch party for One Hearth, a new food truck that features a wood-fired oven. A new food truck in BTV is not exactly stop-the-presses news. But the party looks awesome.

Headlining is indie darling (and secretly awesome basketball player) Nat Baldwin (Dirty Projectors). He'll be joined by NYC Afrobeat outfit Underground System, members of local neo-soul band Smooth Antics playing a jazz set, and local DJs Disco Phantom and SnakeFoot. The party costs, but the food is free.
———-
Comedy fans, take note: Dan St. Germain will be at Club Metronome tonight for a show co-produced by Nectar's and ArtsRiot. Because ArtsRiot is apparently taking over Burlington. I, for one, welcome our new hipster overlords.

Anyhoo, I could run through St. Germain's impressive résumé of comedy credentials to hip you to reasons you might wanna check out the man tonight. Or I could just let him tell ya. Dan?